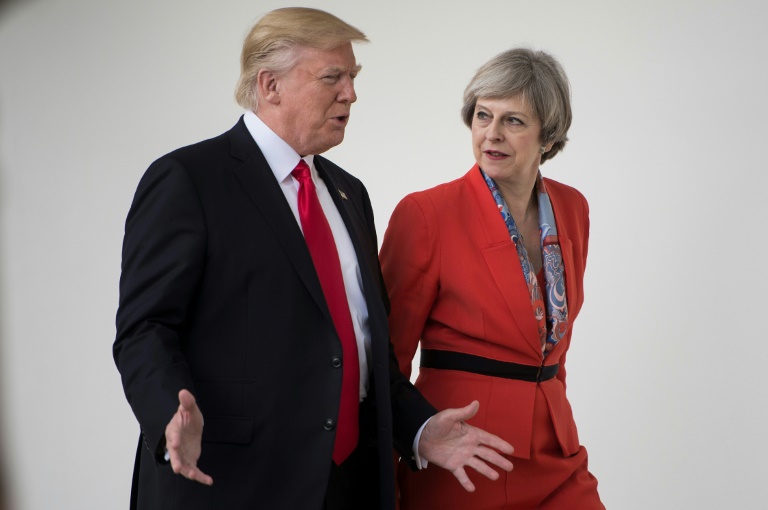 Britain is rolling out the red carpet for US President Donald Trump on Monday as he arrives in Britain for a state visit already overshadowed by his outspoken remarks on Brexit.

Queen Elizabeth II will welcome Trump and his wife Melania to Buckingham Palace, where they will be treated to a guard of honour, a private lunch and a glittering state banquet.

But beneath the pomp and ceremony, Britain is in turmoil with Prime Minister Theresa May due to step down within weeks over her handling of her country’s exit from the European Union.

True to form, Trump ripped up the diplomatic rule book before he even touched down by saying former foreign minister Boris Johnson would make an “excellent” choice to succeed May.

He also recommended May’s successor walk away from talks with Brussels, refuse to pay Britain’s agreed divorce bill and leave the EU with no deal.

The much vaunted UK-US “special relationship” was already under strain over different approaches to Iran, China and the Paris climate change accord.

Opposition politicians are boycotting the banquet over what London’s mayor Sadiq Khan called Trump’s “divisive behaviour” and large protests are expected across the capital.

But May and Trump are expected to emphasize the wider benefits of the old alliance when they hold talks at Downing Street on Tuesday.

On Wednesday, they will join other world leaders in the English port of Portsmouth to commemorate 75 years since the D-Day landings, which changed the course of World War II.

“Our relationship has underpinned our countries’ security and prosperity for many years, and will continue to do so for generations to come,” May said ahead of the visit.

May announced her resignation last month after failing to get her Brexit deal through parliament and twice delaying Britain’s EU departure.

She will formally quit as her Conservative party’s leader on Friday, but will stay on while they find someone to replace her.

Three years after the referendum vote for Brexit, Britain remains divided and anxious about its place in the world.

Trump recommended the new government “walk away” from talks with the EU if it cannot get a good deal, and refuse to pay the £39 billion (45 billion euros, $50 billion) divorce bill May agreed.

In an interview with the Sunday Times newspaper, he emphasized that there was “tremendous potential” for Britain to trade with his country after Brexit.

Trump also said he might meet with Johnson, one of 13 candidates vying to replace May, as well as pro-Brexit populist leader Nigel Farage during his UK visit.

“They want to meet. We’ll see what happen,” he told reporters before he left the United States.

He earlier condemned putting on a show for a world leader who “rips up vital international treaties, backs climate change denial and uses racist and misogynist rhetoric”.

Trump’s first official visit to Britain last year was overshadowed by criticism of May’s approach to Brexit, as well as large demonstrations.

Protesters are planning another big turnout this week and are hoping to once again fly their inflatable balloon showing Trump as a baby over the streets of London.

But the president’s itinerary, which also includes a tea with heir to the throne Prince Charles, will keep him away from the public.

He is not due to meet Prince Harry and his American wife Meghan Markle, who has previously been highly critical of Trump.

Asked about Markle’s comments in his weekend interviews, Trump said: “What can I say? I didn’t know that she was nasty.”

May was the first foreign leader welcomed to the White House after Trump’s election victory in November 2016, but their relationship has not always been rosy.

They have clashed in the past over his migration policies, while Britain still backs the Iranian nuclear deal and the Paris climate accord, both of which Trump has abandoned.

Washington has also been putting pressure on Britain to exclude Chinese tech giant Huawei from its 5G network over security concerns, suggesting it might harm intelligence sharing.

Image: AFP / Brendan Smialowski Trump ripped up the diplomatic rule book before he even touched down by endorsing former foreign minister Boris Johnson to take over from Theresa May