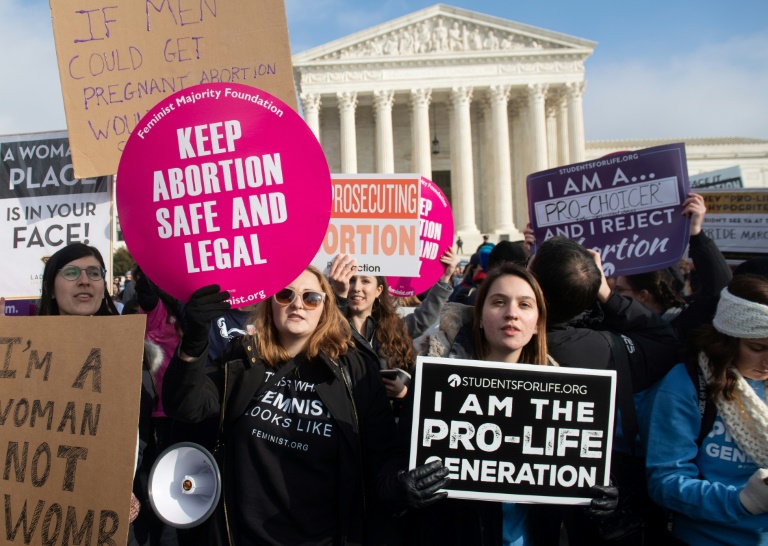 With his eyes firmly on the November election, Donald Trump will Friday become the first US president to address in person the country’s biggest annual gathering of anti-abortion campaigners.

Addressing a crowd of thousands on the National Mall in Washington, Trump is assured of a hero’s welcome as the unrivaled star of this year’s “March for Life.”

Just blocks away in the Congress building, in what will surely be a remarkable split-screen moment, senators will be sitting in judgment at the president’s impeachment trial.

While impeachment will forever stain his record, Trump is all-but-assured of exoneration by the Republican-held Senate — and the former real estate magnate is already looking past the trial to the re-election fight that awaits.

Before entering politics Trump described himself as pro-abortion rights, but he has increasingly aligned himself with the anti-abortion movement as he works to firm up his electoral base — none more so than the white evangelicals who backed him overwhelmingly in 2016.

“President Trump has governed as the most pro-life president in history,” summed up Marjorie Dannenfelser, head of the anti-abortion campaign group SBA List.

“We are proud to stand with President Trump and are going all in to ensure his re-election,” said the activist, whose group plans to visit four million voters before election day “to defeat abortion extremists.”

The “March for Life,” which Trump has addressed by video message the last two years, is organized annually on or near the anniversary of the Supreme Court’s ruling in Roe v Wade, which legalized the procedure nationwide on January 22, 1973.

In his message to last year’s march, Trump said he had made clear to Congress that he would veto any legislation that “weakens the protection of human life.”

Conservative-leaning Chief Justice John Roberts is seen as the potential swing vote if the constitutionality of abortion eventually comes before the court.

Around two-thirds of Americans say abortion should be legal, polls suggest.

But while Roe v Wade remains the law of the land, numerous states have taken measures to limit access to abortion.

The first big Supreme Court test of that anti-abortion push will come in March, when the court examines a Louisiana law whose restrictions on abortion are similar to a Texas law struck down nearly four years ago.

As it does each year, the march will start at the National Mall and end at the Supreme Court behind the Capitol building, where 100 senators are sitting as jurors in Trump’s impeachment trial.

Image: Anti-abortion activists and pro-choice supporters protest outside the US Supreme Court in 2019 (AFP/File/SAUL LOEB)

Sanders steps up appeals to women after flap with Warren