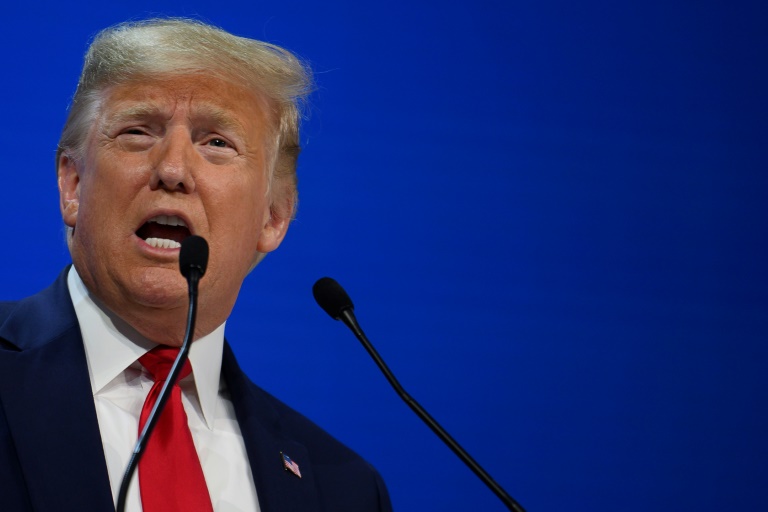 The two sides squared off in fiery exchanges that circled around the procedures for the trial and gave the Democrats an opportunity to spell out their arguments for Trump’s guilt on national television.

But Republican Senate leader Mitch McConnell flexed his own political muscle, mobilizing his side’s 53-47 majority in the body to slap down Democratic attempts to amend the trial procedures that he reportedly crafted together with the White House and designed to protect Trump.

After 13 hours, just before 2 am, McConnell was successful in pushing back every Democratic effort, ensuring Republicans had control over a trial they hope will be wrapped up by the end of the month.

The president meanwhile monitored the challenge to his three-year-old presidency from the World Economic Forum in Davos, Switzerland.

The case is “just a hoax,” he said. “It’s the witch hunt that’s been going on for years and frankly it’s disgraceful.”

McConnell’s rules set out a schedule of six days of arguments, three days by the House impeachment managers and then three days by Trump’s defense team, to be followed by one day of questions from the 100 Senators, who sit as jury in the trial.

Democrats though were angered by McConnell’s refusal to call witnesses and subpoena documents before the trial’s arguments phase is over.

Without any guarantee that witnesses would be called even at that time, they sought in a last-ditch move to give the presiding judge, Supreme Court Chief Justice John Roberts, the last word on calling witnesses.

That too was rejected in a stark party-line vote.

“They don’t want a fair trial,” said Adam Schiff, the leader of the House impeachment managers prosecuting the case.

But Schiff’s team took advantage of the opportunity to seek amendments to occupy the television cameras for most of the hearing and lay out their case against the US leader.

They used detailed graphics and played videos of US diplomats testifying late last year to demonstrate that Trump oversaw the months-long scheme to pressure Ukraine to help him politically damage potential 2020 election opponent Joe Biden and the Democrats.

They also played a video of Trump himself saying last December that he would “love to have” witnesses like Mulvaney appear.

Trump’s lawyers, led by Pat Cipollone and Jay Sekulow, appeared to struggle to rebut the Democrat attack, ceding an opportunity to defend Trump on television and arguing mostly that the House investigation had been unfair to the president.

Cipollone accused the Democrats of “phony political investigations,” against Trump ahead of his November re-election fight.

“They are trying to remove President Trump’s name from the ballot and they can’t prove their case,” he said.

The political endurance test signalled what could be ahead for the Senate over the coming week.

Twelve hours into the debate, tempers boiled and Roberts broke his silence to admonish prosecutors and the defense after they traded accusations of lying.

It was an equal test for the jury, the 100 senators essentially locked in the Senate chamber, forced to pay attention rather than dealing with other chores.

Barred from bringing their mobile phones and computers, they scribbled on notepads, chatted quietly, fidgeted and stretched.

“I’m ready to sit there as long as I need to,” she said — adding that, without her phone, “I suppose the first day I’ll have a little withdrawal, but we’ll be fine.”

Four Democratic senators seeking their party’s nomination to face Trump in November’s election were forced to take time off from campaigning ahead of the first state caucuses to choose a nominee in Iowa on February 3.

“We’re all there to do our duty…. I can do two things at once,” said Senator Amy Klobuchar.

There remained little doubt about the outcome of the trial, given the Republican Senate majority and Trump’s command of party loyalty.

The key question was whether Democrats could convince several Republicans to support their call for witnesses next week to prolong the trial.

“McConnell continues his iron grip on the Republican majority,” Coons said outside the hearing.

“The Republican majority is still going to try to tear through this case in 10 days.”

Image: AFP / JIM WATSON President Donald Trump’s trial for abuse of power opens in Washington while from Davos, Switzerland he again labeled it a “hoax” and “witch hunt”