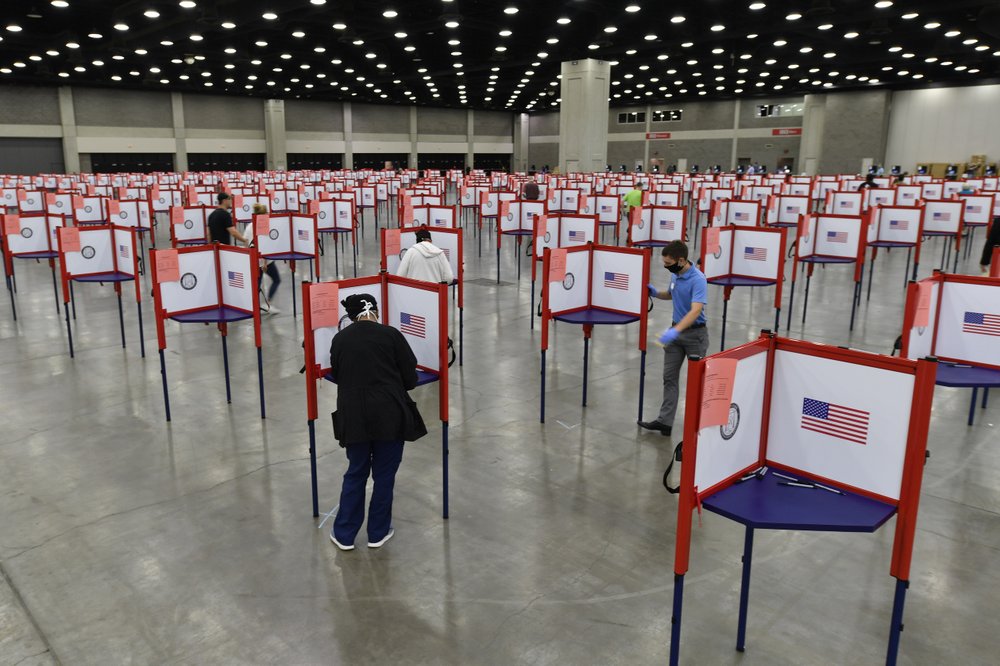 WASHINGTON (AP) — It was a startling declaration about one of the pillars of American democracy, all the more so given its source.

The president of the United States last week publicly predicted without evidence that the 2020 presidential election would be “the most corrupt election in the history of our country.”

“We cannot let this happen,” Donald Trump told an audience of young supporters at a Phoenix megachurch. “They want it to happen so badly.”

Just over four months before Election Day, the president is escalating his efforts to cast doubt on the integrity of the vote.

It’s a well-worn tactic for Trump, who in 2016 went after the very process that ultimately put him in the White House. He first attacked the Republican primaries (“rigged and boss controlled”) and then the general election, when he accused the media and Democratic rival Hillary Clinton’s campaign of conspiring against him to undermine a free and fair election.

“The process is rigged. This whole election is being rigged,” he said that October when polls showed him trailing Clinton by double digits as he faced a flurry of sexual misconduct allegations.

Then, as now, election experts have repeatedly discredited his claims about widespread fraud in the voting process.

In a country with a history of peaceful political transition, a major-party candidate’s efforts to delegitimize an election amounted to a striking rupture of faith in American democracy. But to do the same as president, historians say, is unprecedented.

“Never,” said presidential historian Douglas Brinkley when asked whether any past US president had ever used such language. “What you’re seeing is someone who’s an autocrat or a dictator in action.”

This year, Trump has seized on efforts across the country to expand the ability of people to vote by mail. It’s a movement that was spurred by the coronavirus, which has infected more than 2.4 million people in the US and killed more than 125,000 nationwide. The virus is highly contagious and especially dangerous for older people, who typically vote in higher numbers and have been advised by federal health authorities to limit their interactions with others.

There is no evidence of widespread voter fraud through mail-in voting, even in states with all-mail votes. Trump and many members of his administration have themselves repeatedly voted via absentee ballots. But that hasn’t stopped Trump from accusing Democrats of trying to “rig the election by sending out tens of millions of mail-in ballots, using the China virus as the excuse for allowing people not to go to the polls.”

Trump’s complaints come as he has been lagging in both internal and public polls. The criticism is seen by some as part of a broader effort by Trump to depress turnout by making it harder for people, especially in cities, to vote safely, and to lay the groundwork for a potential challenge to the results in November if he loses. Trump and his campaign vociferously deny this.

Julian Zelizer, a presidential historian at Princeton University, said Trump may be trying to preempt the sting of a humiliation if he fails to win a second term. But Zelizer said Trump also appears to be “setting up the foundation for taking action.”

“What I do think is very realistic is a replay of 2000,” he said, referring to the legal saga in which the Supreme Court stepped in to resolve a dispute over which candidate had won Florida. Republican George W. Bush’s ultimate win in the state gave him a general election victory over Democrat Al Gore.

If this year’s election is close, Zelizer said, Trump could turn to the courts “and wage a political campaign to say this is being stolen and tie up efforts to count the votes.”

Brinkley was even more alarmist, questioning whether Trump would vacate the office if he lost.

“Trump is laying down his markers very clearly that he’s not going to leave the White House. I think that he’s just setting the stage,” Brinkley said, to say ”‘I’m not leaving. It was a fraudulent election.’”

Even barring such an extreme move, Brinkley said the president’s rhetoric undermines public confidence in the electoral system. “It creates mayhem and it breaks the heart of what a democracy is.”

Americans already have widespread concerns about the security and integrity of elections. A February poll from The Associated Press-NORC Center for Public Affairs Research found that only about one-third have high confidence that votes in the 2020 election will be counted accurately.

Americans’ support for mail-in voting has jumped amid concerns over the virus, with 6 in 10 now saying they would support their state allowing people to vote by mail-in ballot without requiring a reason, according to an April survey. Democrats are far more likely to support it than Republicans, a partisan split that has emerged since 2018, suggesting Trump’s public campaign may be resonating with his GOP backers.

White House officials and Trump’s campaign say he has raised the issue because Democrats are trying to use the virus as an excuse to tilt voting rules their way.

“I think the president is only talking about this because Democrats have been going around to try to change rules in their favor under the guise of the virus. … This isn’t a fight he picked,” said Trump campaign political adviser and senior counsel Justin Clark. “The coronavirus does not give us an excuse to radically alter our way of voting.”

Officials noted Trump has voiced support for the use of absentee ballots when voters have a legitimate reason, although he has not said whether that includes fear of contracting the virus.

“Imposing a new voting system in a hurried fashion ahead of November only exacerbates the real, underlying concerns about the security of voting by mail without the proper safeguards,” said White House spokesperson Sarah Matthews. “All Americans deserve an election system that is secure and President Trump is highlighting that Democrats’ plan for mass mail-in system would lead to fraud.”

But Wendy R. Weiser, director of the Democracy Program at the Brennan Center for Justice at NYU School of Law, said such concerns are “completely baseless,” according to study after study. While no system is immune to fraud, she said, expanded voting by mail is “clearly the safest and necessary response to a pandemic.”

Trump’s efforts to suggest otherwise are “extremely damaging to America, to our democracy, on multiple fronts,” she said, noting that foreign adversaries have long tried to undermine confidence in the American politician system.

“This,” she said, “is in some respects doing their work for them.”

Image: FILE – In this June 23, 2020, file photo voting stations are set up in the South Wing of the Kentucky Exposition Center for voters to cast their ballot in the Kentucky primary in Louisville, Ky. Just over four months before Election Day, President Donald Trump is escalating his efforts to delegitimize the upcoming presidential election. Last week he made a startling, and unfounded, claim that 2020 will be “the most corrupt election in the history of our country.” (AP Photo/Timothy D. Easley, File)

Democrats warn against overconfidence in fight against Trump