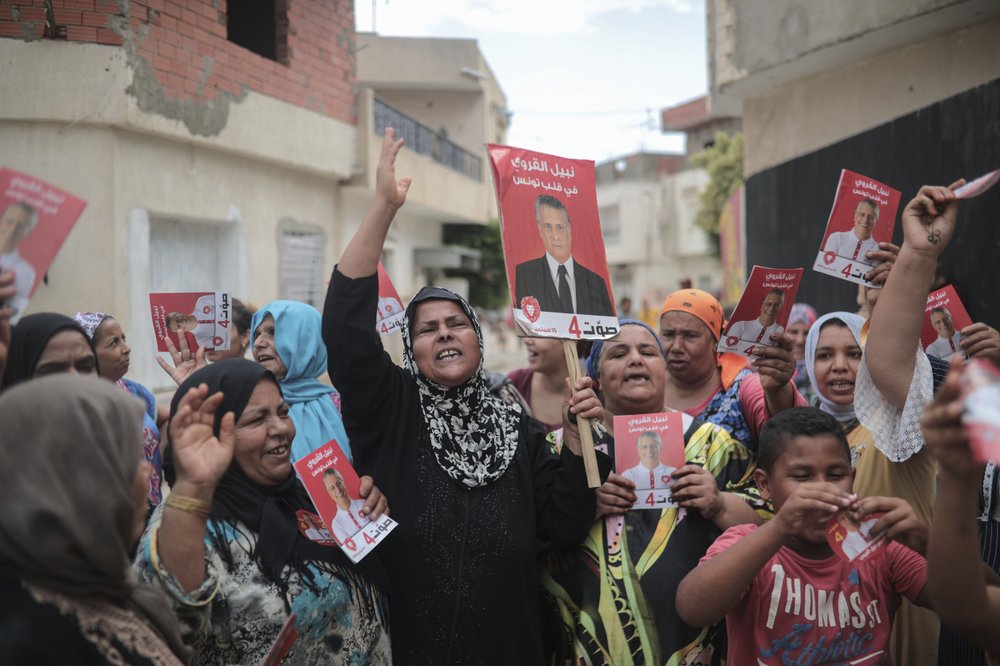 NABEUL, Tunisia (AP) — The professor refuses to campaign for president and the prisoner cannot, yet both are running for Tunisia’s highest office.

Tunisian voters sent two political outsiders into the presidential runoff, forcing a choice between an obscure conservative law professor who believes Tunisians know enough about him already and a media magnate whose face is plastered over posters nationwide, but who’s been in jail for the last month on corruption allegations.

Professor Kais Saied is refusing to hold rallies, print posters or use any of the usual marketing that drives a modern presidential campaign. He won the first round on Sept. 15, with 18% of the vote.

In second with 15% support was Nabil Karaoui, a jailed mogul who sends out Facebook missives and letters via his wife and lawyers but otherwise must reply upon supporters and his longstanding reputation as the head of a charity that hands out macaroni and other gifts to the poor — or potential voters, depending on your perspective. He denies the charges, claiming they aim to hurt him at the polls.

Those results mean that fewer than one in five who voted in the first presidential round will actually get the leader they wanted, a major test for Tunisia’s young democracy.

The North African nation on the Mediterranean Sea was the fountainhead of the 2011 Arab Spring protests, touched off by the self-immolation of a young fruit vendor. It has already elected one president, who died this summer at 92. It has also elected a parliament, dominated by the Islamist Ennahdha party. But Ennahdha’s candidate was resoundingly defeated in the first presidential round on Sept. 15 — a message the party has acknowledged as it threw its support behind Saied.

In the midst of the campaigning for the second tour, the authoritarian leader ousted in the 2011 protests, Zine el-Abidine Ben Ali, died last week, soon after the defeat of the candidate most saw as an emblem of nostalgia for his regime.

“Tunisia is not immune to what’s happening in the rest of the world,” said Jaouher Mghirbi, head of the parliamentary list for Karaoui’s Heart of Tunisia party in Nebeul, a region outside the capital where the absent candidate fared unusually well. “This is a message from the citizens that they didn’t trust the system. We have to analyze it, because the survival of democracy depends upon it.”

Saied, who speaks an almost mono-tonal classical Arabic in public rather than the Tunisian dialect of every other candidate, doesn’t seem to see it in such stark terms. Known as a methodical scholar of constitutional law, he lacks political party, personal charisma and social media presence. He refused to acknowledge that he even has an opponent and does not campaign, but he has the support of legions of young Tunisians who spread their enthusiasm on Twitter and their elders who project on him their hopes for the future.

What he offers — in addition to his reputation as a leading conservative intellectual — is a blank slate.

In the city of Ben Gardane, the economy all but died after the 2011 protests in Tunisia and the subsequent uprising in nearby Libya degenerated into a free-for-all among warring militias. The town’s roads are pitted, dusty, and lined with empty storefronts. Khalifa Mars, an unemployed 56-year-old, said he voted for Saied.

“I think he will give more to our country to develop it and especially to develop the economy,” he told The Associated Press. “We live in the city of Ben Gardane, a forgotten city, a city that has no source of jobs, no industry, an almost Saharan city, next to the sea, but no industry.”

Tunisia’s election commission has set Oct. 13 for the presidential runoff. Karaoui’s next court date is Oct. 2 at the earliest, giving him at best 11 days to campaign. Election authorities have said he can debate Saied via a live feed from his cell, if necessary.

In a van plastered with peeling stickers bearing Karaoui’s face, Mghirbi recently ventured into one of the poor neighborhoods that serve as Karaoui’s base. He was mobbed by ululating supporters as he passed around posters and stickers. The party promises solidarity and development, but has no concrete plans to improve Tunisia’s economy.

Around a third of all of Tunisia’s young people are unemployed and large swathes of its rural center have no electricity, drinking water or functioning schools.

“At least Karaoui gives us macaroni. The others did nothing,” one woman shouted as she waved a red flier on an unpaved road.

But the absence of Karaoui, who has been compared to Italy’s Silvio Berlusconi, clearly weighed upon Mghirbi.

“Everywhere in the world, electing a leader means electing the person,” he said.

As Tunisia awaits its next leader, massive challenges lie ahead for this nation of 11.5 million people.

“We’re living in difficult times,” said Mars. “God willing, we want someone who will change our situation and do some good for our country.”

Photo: In this Saturday, Sept. 21, 2019 photo, supporters of jailed media magnate Nabil Karoui chant for his freedom and carry posters which were provided to them by his campaign officials, in Nabeul, west of Tunis, Tunisia. The two final contenders for Tunisia’s upcoming presidential runoff vote, pitches a professor who refuses to campaign, against a media mogul who can only campaign from his jail cell. (AP Photo/Mosa’ab Elshamy)