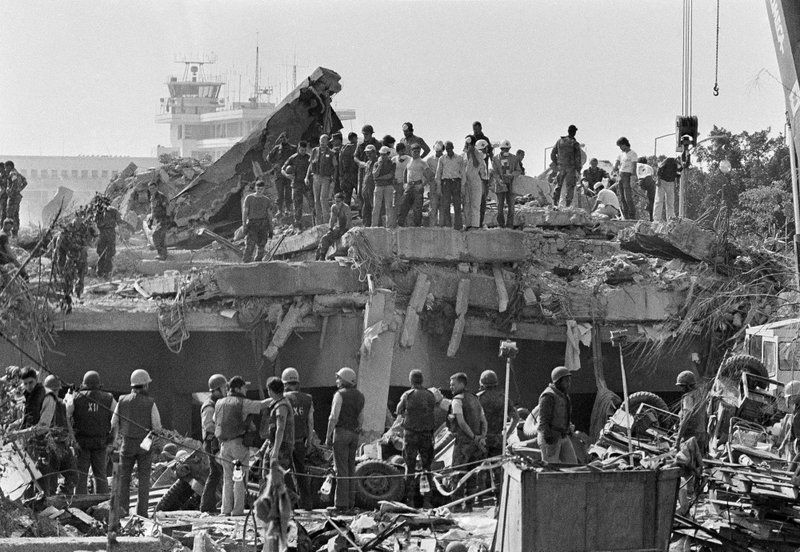 BEIRUT (AP) — It was a century ago on Sept. 1, 1920, that a French general, Henri Gouraud, stood on the porch of a Beirut palace surrounded by local politicians and religious leaders and declared the State of Greater Lebanon — the precursor of the modern state of Lebanon.

The current French president, Emmanuel Macron, is visiting Lebanon to mark the occasion, 100 years later. But the mood could not be more somber.

Lebanon has been hit by a series of catastrophes, including a financial crash. On Aug. 4, a massive explosion at Beirut’s port killed at least 190 people and injured thousands — the culmination of decades of accumulated crises, endemic corruption and mismanagement by an entrenched ruling class.

Facing potential bankruptcy and total collapse, many Lebanese are marking the centennial with a feeling that their experiment as a nation has failed and questioning their willingness to stay in the crisis-riddled country.

“I am 53 years old and I don’t feel I had one stable year in this country,” said prominent Lebanese writer Alexandre Najjar.

Like others from his generation, Najjar lived through the 1975-1990 civil war, when Beirut’s name became synonymous with hostages, car bombings and chaos.

He was a teenager when Israel invaded Beirut in the summer of 1982, imposing a suffocating siege of the capital for three months, and a young man when Christian militias turned their guns on each other in 1989. When former Prime Minister Rafik Hariri was assassinated in a massive Beirut truck bombing in 2005, Najjar was in his late 30s.

The following year, Israel and Hezbollah engaged in a month-long war. In between, countless other conflicts, bouts of sectarian fighting and other disasters plagued one generation after another, leading to waves of Lebanese emigration.

But the Aug. 4 explosion, says Najjar, was the “peak of a failed state” — proof that authorities cannot even provide basic public safety.

It wasn’t supposed to be that way.

Following the fall of the Ottoman Empire after World War I, Lebanon fell under the French mandate, starting in 1920. France governed for 23 years until the country gained independence as the Lebanese Republic.

Home to 18 different religious sects, it was hailed as a model of pluralism and coexistence. The nation settled on an unwritten sectarian arrangement, initially seen as the guarantee of stability but which many Lebanese now consider a curse: the president would always be Christian, the prime minister Sunni Muslim and the parliament speaker Shiite Muslim, with other posts similarly divvied up.

In the 1950s, under pro-Western President Camille Chamoun, the economy flourished thanks to booming tourism and cash from oil-rich Arab nations. But his presidency ended with the outbreak of Lebanon’s first civil war in 1958, which lasted for several months and saw US troops land to help Chamoun.

Lebanon saw its heyday in the 1960s and early 1970s, when the country became a regional center for the rich and famous who flew from around the world to gamble at the Casino Du Liban, or to attend concerts in the ancient northeastern city of Baalbek by international artists such as the Berlin Philharmonic, Soviet ballet dancer Rudolf Nureyev, American jazz singer Ella Fitzgerald, as well as famous Arab singers like Egypt’s Umm Kalthoum and Lebanon’s own Fairouz.

Palestinian militants during this time had begun launching attacks against Israel from Lebanese territory, splitting the Lebanese. Disaster struck again in 1975, with the start of the 15-year civil war, eventually pitting Lebanon’s sects against each other. That conflict killed nearly 150,000 people. Syrian troops moved in, and Israel invaded twice — once in 1978, then again in 1982, in an assault that forced late Palestinian leader Yasser Arafat and his fighters to leave Lebanon.

US interests were repeatedly attacked, most notably two bombings of the American Embassy and the 1983 Marine barracks bombing in Beirut that killed 241 U.S. service members, the deadliest attack on the Marines since the battle of Iwo Jima in 1945. On the same day, 58 French paratroopers were killed by a second attacker who struck their installation in Beirut.

The country also had two presidents and two prime ministers assassinated, in addition to dozens of other politicians, legislators, journalists and activists who were killed.

Israel’s 1982 invasion and the attacks on the Americans marked the rise of what later became the militant group Hezbollah.

After the civil war ended in 1990, the Iranian-backed Shiite militia was the only one allowed to keep its weapons because it was fighting Israeli occupation forces in southern Lebanon. When Israel withdrew from the south in 2000, Hezbollah kept its powerful fighting force, depicting itself as Lebanon’s defender. It fought Israeli forces to a draw in 2006, and tensions remain high along the border.

Today, Hezbollah and its allies, led by President Michel Aoun, dominate Lebanese politics and control a majority in parliament.

But the Lebanese are deeply divided over Hezbollah. While many in the Shiite community are fiercely loyal to the group, and many non-Shiites sympathize with its anti-Israel stance, others increasingly see it as imposing Iran’s will on the country.

Many civil war-era warlords today head political factions, holding onto posts for themselves or their families and controlling powerful local business interests. The factions pass out positions in government ministries and public institutions to followers or carve out business sectors for them, ensuring their backing.

Corruption has soared over the past two decades, and the sectarian-based patronage system has left Lebanon with crumbling infrastructure, a bloated public sector and one of the world’s highest debt ratios, at 170 percent of GDP — topped by a ruling class that amassed fortunes.

Last October, nationwide protests erupted over the worsening economy, and the financial juggling act that had been the basis of Lebanon’s prosperity since 1990 collapsed into the most severe economic crisis of the country’s modern history, made worse by the coronavirus pandemic.

“Lebanon is in its worst period over the past 100 years,” said legislator Marwan Hamadeh. “We are in the worst stage, economically, politically and even when it comes to national unity.”

“We are currently occupied by Iran and its missiles,” added Hamadeh, who was seriously wounded in an assassination attempt in 2004 that he blames on Hezbollah.

Historian Johnny Mezher says that to solve its problems, Lebanon could start by adopting a law that boosts national identity rather than loyalty to one’s sect and helps ensure qualifications determine who gets state posts, rather than sectarian connections.

“Religious figures should be prevented from meddling in politics,” he said.

Two days after the port blast — with Lebanese leaders totally absent — Macron visited Beirut and toured one of the most heavily damaged neighborhoods to a hero’s welcome, with some chanting “Vive La France.”

More than 60,000 signed a petition to place Lebanon under French mandate for 10 years, an idea Macron firmly dismissed. “It’s up to you to write your history,” he told the crowds.

On his return trip, Macron will plant a tree in Beirut on Tuesday to mark the centenary and meet with Lebanese officials to push them toward forming a government and enacting reforms.

“There is no doubt we were expecting the 100th anniversary to be different. We did not expect this year to be catastrophic to this level,” said Najjar, who is a lawyer, poet and author of about 30 books in French, including one that tells the story of Beirut during the 20th Century.

“There is still hope,” he said. “We have hit rock bottom and things cannot get worse.”

Image: FILE – In this Oct. 24,1983 file photo, rescuers continue to probe the wreckage of the U.S. Marine barracks a day after a suicide truck bomb near Beirut airport, Lebanon. It was a century ago on Sept. 1, 1920, that a French general, Henri Gouraud, stood on the porch of the French residence in Beirut surrounded by local politicians and religious leaders and declared the State of Greater Lebanon – the precursor to the modern state of Lebanon. (AP Photo/Zouki, File)

Lebanon set to designate new PM ahead of Macron visit