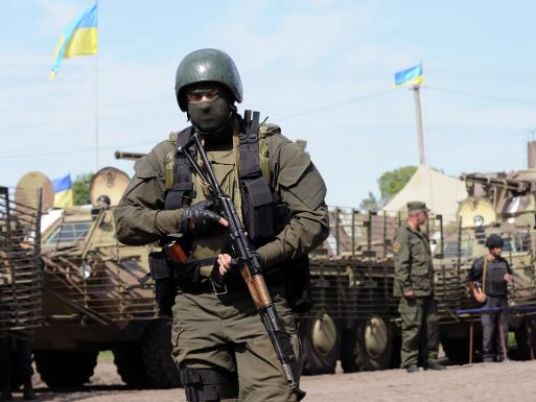 Ukrainian government forces accused pro-Russian separatists of firing on Ukrainian military checkpoints in several parts of the east on Monday night despite a ceasefire declared by the rebels.
No sustained fighting were reported in the incidents, nor any casualties on the Ukrainian side which is also observing a week-long ceasefire until 27 June.
"(Separatist) fighters are not ceasing to shoot at the positions of Ukrainian forces," Vladyslav Seleznyov, a spokesman for the Kiev government's "anti-terrorist" operation, said on his Facebook page on Tuesday.
Rebel militia, using grenade-launchers and mortar, carried out attacks on a government military post near the rebel-controlled town of Slaviansk and used small arms in an assault on another post further east towards the border with Russia, Selznyov said.
He said Ukrainian government forces had not been involved in any military action in line with a ceasefire announced by President Petro Poroshenko last Friday.
"I can not say whether the separatists have violated or not violated (the ceasefire), but the facts speak for themselves – yesterday during the day and in the evening they fired on our positions," Seleznyov told Reuters separately.
Separatist leaders in two main areas of Ukraine's east on Monday night agreed also to a truce until the morning of 27 June, raising the first real prospect of an end to hostilities since separatist rebellions erupted in the east in April.
The rebels, who have declared "people's republics" and have said they want to join Russia, declared their ceasefire after talks involving a former Ukrainian president, Moscow's envoy to Kiev and a high-ranking representative of the OSCE security and rights watchdog.
Poroshenko's ceasefire is part of his peace plan to end a pro-Russia insurgency in areas near the border with Russia which threatens dismemberment of the ex-Soviet republic.
Russia annexed Ukraine's Crimean peninsula earlier this year after street protests in Kiev ousted the Moscow-backed Viktor Yanukovich from power.
Poroshenko's plan, which offers a safety "corridor" back to Russia for pro-Russian fighters who lay down their arms, has secured the backing of Western governments and qualified support from Russian President Vladimir Putin who has urged Kiev to hold talks with the separatist leaders.
The next step in contacts between the two sides is not clear, though it seems likely the rebels may use the break in hostilities to press demands for "federalization" of Ukraine – something which Kiev refuses because it sees it as likely to lead to the country breaking up.