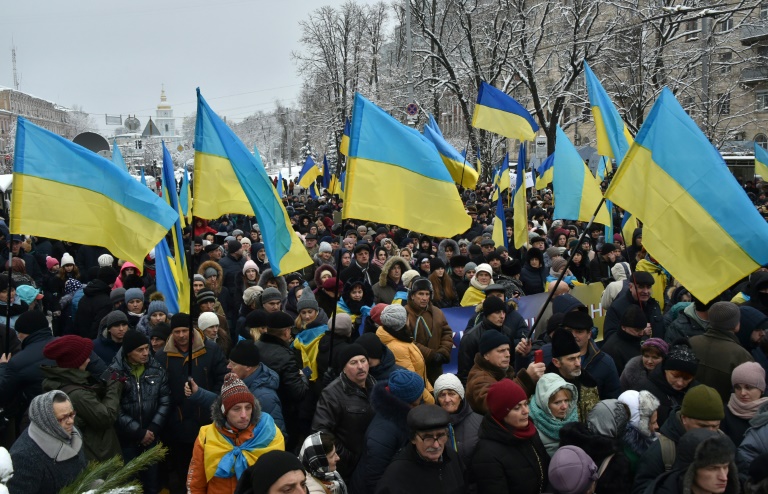 Several thousand Ukrainians rallied outside one of Kiev’s main cathedrals Saturday ahead of a historic synod expected to establish an Orthodox church independent from Russia.

Ukrainian priests were to meet in Kiev’s 11th-century Saint Sophia Cathedral to work towards founding the church, in what Kiev authorities hope will be a further step out of Russia’s orbit.

Ukrainian President Petro Poroshenko briefly came to the rally before going into the cathedral, where he is expected to attend the synod.

“Let’s stand and pray for a Ukrainian church to be created today,” he said as he greeted several of the rally’s participants.

He has made an independent Church a campaign pledge as he looks ahead to an unpredictable election next year.

“The people have been waiting for this. Our Ukrainian church should finally be independent from Moscow,” 65-year-old Mykhaylo Khalepyk, who travelled to Kiev from the southern Kherson region, told AFP.

Vitaliya Popovych, who also came to the rally, said she hoped Ukraine will have a new independent church “that will have a pro-state position.”

Several of the rally’s participants said local churches throughout the country had encouraged parishioners to travel to the capital and even offered free transport.

Ties between Russia and Ukraine have broken down since Moscow annexed Crimea in 2014 following a pro-Western uprising in Kiev, and this year those tensions spilled over into the religious arena.

The synod will seek to realize a landmark decision by Istanbul-based Ecumenical Patriarch Bartholomew I to recognize Ukraine’s independence from the Russian Orthodox Church.

The ruling in October sparked fury in Moscow, which has overseen the Ukrainian branch of Orthodoxy for the last 332 years, and saw the Russian Orthodox Church cut all ties with the Ecumenical Patriarchate of Constantinople.

The synod aims to unite various branches of the Orthodox church in Ukraine into a single independent body.

Ukraine’s Moscow-loyal church said it will snub the event and banned its priests from going to the synod.

But a cleric of the church, Archbishop Kliment, told AFP that he recognized two bishops from the Moscow patriarchy on a photograph at the synod despite the ban.

The meeting is dominated by the Ukrainian Orthodox Church of the Kiev Patriarchate, the country’s largest branch by number of believers.

Its leader, Patriarch Filaret, founded the church after the fall of the Soviet Union but it remained unrecognized by other Orthodox churches until recently.

In Moscow, the Russian Orthodox Church dismissed the synod as uncanonical.

Vladimir Legoida, a spokesman for the Moscow church, told Russian state television that the Kiev synod has “no church, religious or evangelical meaning” and that it will have “no canonical consequences.”

Ukraine’s SBU security service warned this week that Russia was planning to stage “provocations” in the country as the clerics were meeting.

The SBU’s deputy head Viktor Kononenko asked Ukrainians on Thursday to “refrain from holding any (political) gatherings during this period” so that they “could not be used by the aggressor to weaken or discredit our country”.

The Russian church and the Kremlin have both said they fear Kiev will use force to wrest Moscow-loyal churches and monasteries into its control.

Ahead of the council, Russia’s Patriarch Kirill appealed to the Pope, the United Nations and others in the West to defend his church in Ukraine from “persecution”.

Kiev officials have framed the Church issue as one of national security, with Poroshenko in the past referring to the branch loyal to the Moscow Patriarchate as a “threat”.

The synod comes shortly after a fresh crisis that saw Russia seize three Ukrainian navy ships and arrest 24 sailors in the waters around Crimea.

If the attempt to create a unified Ukrainian Church is successful, it would be among the largest in the Orthodox world in terms of numbers of believers.