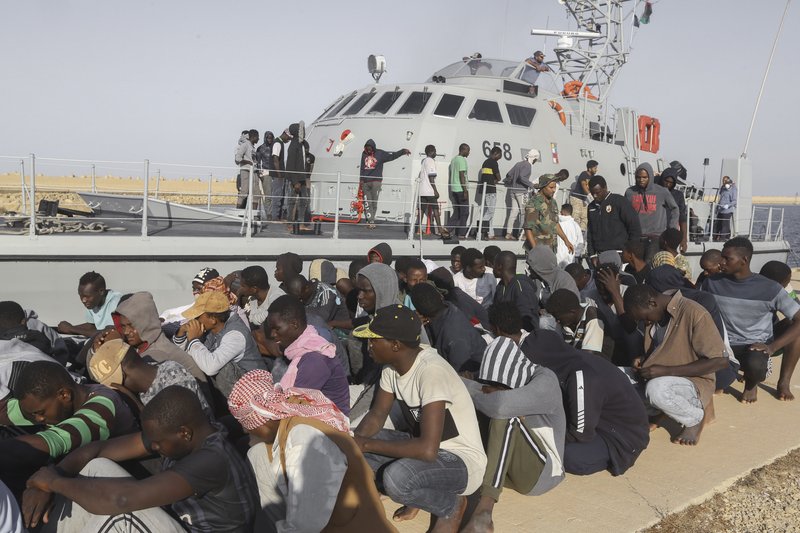 CAIRO (AP) — The UN refugee agency plans to cut the number of migrants staying at an overcrowded transit center in Libya’s capital, a spokesman said Saturday.

Libya is a major waypoint for migrants fleeing war and poverty in Africa and the Middle East to Europe.

“The situation is very difficult, and we do not have the resources” because the center in Tripoli is at about twice its capacity, with some 1,200 migrants, Charlie Yaxley, a UNHCR spokesman, told The Associated Press.

The UNHCR has asked those refugees not registered with the agency to leave the European Union-funded Gathering and Departure Facility, offering an assistance package that includes cash for an initial two months.

“You will not be considered for evacuation or resettlement if you stay at the GDF,” the agency warned the migrants, according to a document obtained by the AP. It added that those seeking registration with the agency could only do so “outside” the facility.

The UNHCR said it would phase out food distribution for the unregistered migrants, including dozens of tuberculosis patients, from Jan. 1.

Yaxley said the agency also offered to facilitate returning the migrants to their home country or to a country they previously registered as asylum-seekers.

Migrants, however, decried the move, fearing they would end up at detention centers or at the mercy of human traffickers.

“The migrants are reluctant and have their concerns about leaving the GDF,” one person seeking shelter at the facility said, who spoke on condition of anonymity for his safety. The surrounding areas of Tripoli have seen heavy fighting between armed factions since April.

The self-styled Libyan National Army, led by Gen. Khalifa Hifter, launched an offensive to capture the capital city in April, clashing with an array of militias loosely allied with the UN-supported but weak government there.

The fighting has stalled in recent weeks, with both sides dug in and shelling one another along Tripoli’s southern reaches. They have also carried out airstrikes and drone attacks.

In July, an airstrike hit a detention center for migrants outside Tripoli, killing more than 50 migrants held there. The Tripoli-based authorities blamed the LNA for the airstrikes. The LNA, however, said it was targeting a nearby military site, not the detention center.

After the airstrike, hundreds of former detainees made their way into the GDF, the agency said. They were followed by another group of around 400 people from Abu Salim detention center in late October, as well as up to 200 people from urban areas, the UNCHR said.

The gathering point, which was opened a year ago, has capacity for around 600 people.

“We hope that the GDF will be able to return to its original function as a transit facility for the most acutely vulnerable refugees, so we are able to evacuate them to safety,” said UNHCR’s Chief of Mission for Libya Jean-Paul Cavalieri.

There are some 40,000 refugees and asylum-seekers living in urban areas across Libya, some of whom are extremely vulnerable, face abuse in militia-run detention centers, and are in desperate need of support, according to the UN refugee agency.

Separately, the Libyan coast guard said Saturday it intercepted at least 205 Europe-bound migrants off the western town of Zawiya. The African migrants, who included 158 men, 33 women and 14 children, were given humanitarian assistance and were taken to the detention center in Tajoura.

Libya’s detention centers are rife with abuse and Europe’s policy of supporting the coast guard has come under growing criticism.

Image: FILE – In this Oct. 1, 2019 file photo, rescued migrants are seated next to a coast guard boat in the city of Khoms, around 120 kilometers (75 miles) east of Tripoli, Libya. The UN refugee agency plans to cut the number of migrants staying at an overcrowded transit center in Libya’s capital, a spokesman said Saturday, Nov. 30. Libya is a major waypoint for migrants fleeing war and poverty in Africa and the Middle East to Europe. “The situation is very difficult, and we do not have the resources” because the center in Tripoli is at about twice its capacity, with some 1,200 migrants, Charlie Yaxley, a UNHCR spokesman, told The Associated Press. (AP Photo/Hazem Ahmed, File)