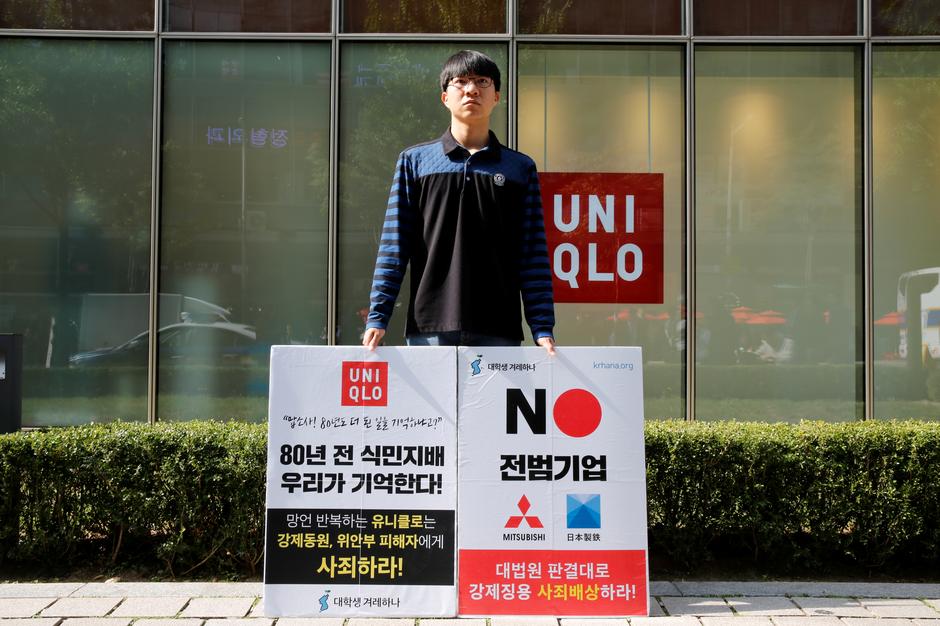 SEOUL (Reuters) – A commercial by Japanese clothing brand Uniqlo has stirred a consumer backlash in South Korea amid accusations that it mocks victims of wartime forced labor and brothel workers, reopening deep wounds from Japan’s colonial past.

A YouTube video created by a South Korean student parodying the ad has gone viral and protesters have targeted Uniqlo stores, demanding an apology from the company.

In the Uniqlo commercial, Iris Apfel, a 97-year-old American style icon with more than 1.4 million Instagram followers, is in an animated conversation with 12-year-old fashion designer Kheris Rogers.

When Rogers asks how she used to dress as a teenager, Apfel says: “I can’t remember that far back!”

Instead of a literal translation of that line, the commercial that aired in South Korea carried subtitles saying: “Gosh! How can I remember something that goes back 80 years?”

Gaining more than 101,000 views in two days, the 19-second parody video posted on Saturday depicts a likeness of the Uniqlo TV commercial, which the company began airing this month in South Korea and other markets.

In the parody, South Korean college student Youn Dong-hyeun stands with Yang Geum-deok, a 90-year-old woman who had been a forced laborer for Japan’s Mitsubishi during World War Two.

Youn, a history major, asks how hard it was for Yang when she was young. “It is impossible to ever forget that awfully painful memory,” she replies. Youn has posted the video with subtitles in English and Japanese.

“There was no intention to touch on the issue of comfort women or the South Korea-Japan dispute,” a Uniqlo official in Seoul told Reuters, asking not to be identified because of the sensitivity of the situation.

“Comfort women” is a euphemism for girls and women, many of them Korean, who were forced to work in Japan’s wartime brothels.

In July, Japan tightened controls on exports of three key high-tech materials to South Korea. Seoul accused Tokyo of taking the step in retaliation to the court ruling, prompting a wide-ranging boycott of Japanese products.

“WE REMEMBER”
South Korea and Japan share a bitter history dating to the Japanese colonization of the Korean peninsula from 1910 to 1945, including the use of comfort women.

Lee’s office said he planned to meet Japanese Prime Minister Shinzo Abe on Thursday, which would be the highest-level contact between the two countries since July’s export curbs.

Uniqlo has already seen its South Korean sales hit and a sharp drop in customers at its stores as part of the boycott.

The translation for the ad’s subtitles, which was carried out in South Korea, was meant to help convey the message of the original commercial, the official said. She declined to identify who had performed the translation.

Student protesters took to the streets as the outcry against the commercial grew, demanding an official apology from Uniqlo.

Bang Seulkichan, 22, was among those picketing a Uniqlo store in Seoul, holding a sign that read: “Colonial rule 80 years ago – we remember!”

Image: A university student Bang Seulkichan stands with banners as a protest against recent released Uniqlo commercial in front of a Uniqlo store in Seoul, South Korea, October 22, 2019. The banner reads “Colonial rule 80 years ago – we remember!” REUTERS/Heo Ran