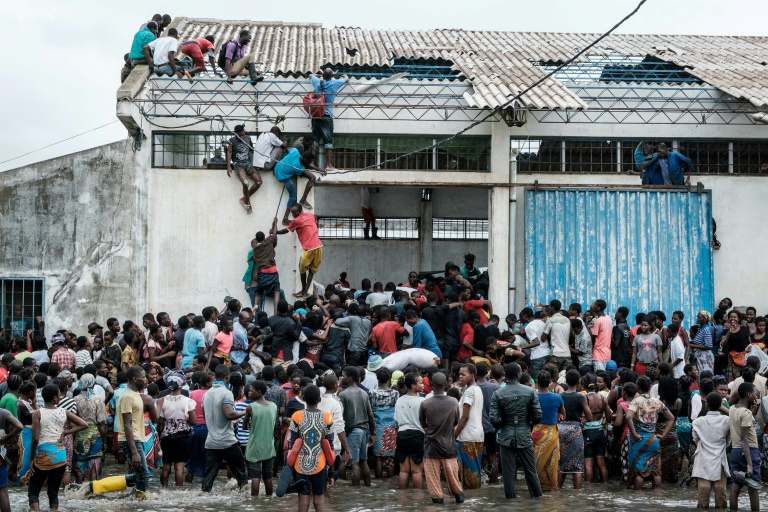 Survivors of a cyclone that pummeled southern Africa began receiving medicine, food and tents Tuesday as floodwaters receded, while officials warned up to 500,000 people are displaced in the storm-struck region.

Cyclone Idai smashed into Mozambique’s coast, unleashing hurricane-force wind and rain that flooded swathes of the poor country before battering eastern Zimbabwe — killing more than 700 people across the two countries according to estimates

An area of roughly 3,125 square kilometers is still under water and three million people across Mozambique, Zimbabwe and Malawi have been affected by the cyclone and its aftermath, according to the UN World Food Programme (WFP).

“Close to 500,000 have been displaced in the three countries,” the WFP said in a briefing note.

The head of the International Federation of Red Cross and Red Crescent Societies (IFRC) Elhadj As Sy warned Monday “we are sitting on a ticking bomb” as he called for renewed efforts to address the worsening health situation.

As logistical conditions improved and roads to affected communities were being reconnected, the full scale of the humanitarian crisis was revealed for the first time since disaster hit on March 15.

Hundreds are still missing in Mozambique and Zimbabwe.

“The conditions for rescue are improving. Yesterday a road reopened which was really important to allow officials to work and rescue,” Mozambique’s Land Minister Celso Correa told reporters on Monday.

The UN Office for the Coordination of Humanitarian Affairs’ Sebastian Rhodes Stampa also said Monday that 30 aid missions were flying in while others were going by road “so we can really deliver volume”.

“We are packing food and shelter now — they will go out (Tuesday) both north and south,” he said.

In New York, UN aid chief Mark Lowcock launched an appeal to provide Mozambique with $282 million to help with relief efforts over the next three months.

Lowcock told reporters that similar campaigns would be instigated in the coming days for Zimbabwe and Malawi.

Buzi, one of Mozambique’s worst-hit towns located 30 kilometers (19 miles) southwest of the city of Beira, became reachable by road on Monday — for the first time since the storm hit.

“It will now be much faster to deliver aid,” Stampa added.

In Buzi, survivor Joao Zacaria said that “one man who had 40 cows lost them all. Forty, can you imagine!”

IFRC head Sy, who had just returned from the region, warned of a “high risk of water-borne diseases” like cholera and typhus — as well as malaria, which is endemic in the region.

The WHO has announced it is mobilizing 900,000 doses of cholera vaccines from the global stockpile to help prevent an epidemic.

A procession of mourners carried the coffin containing the body of Tomas Joaquim Chimukme, who was killed by the cyclone, through saturated marshland outside Beira.

Many of those attending wore open sandals in the water which was ankle-high.

The UN has warned that stagnant water in many areas, decomposing bodies and the lack of sanitation in overcrowded shelters in Mozambique could create breeding grounds for diseases.

The government has already identified some suspected but unconfirmed cases of cholera, Sy said.

“That is the reason why I am raising the alarm. Many of these water-borne diseases are a great risk, but they are preventable,” he added.

“The worst thing is the children crying and looking for their parents… It is heartbreaking,” he said, adding that it remained unclear how many children may have been orphaned.

Medical services in the affected region were stretched even before the cyclone hit and according to aid group Doctors Without Borders (MSF), Beira hospital’s operating theater sustained serious damage. As many as 17 health centers have lost their roofs, it added in a statement.

The South African military has deployed several aircraft to the affected area and an EU-funded WFP chopper is supporting rescue and recovery efforts.

Cyclone Idai deaths could exceed 1,000 as need for aid grows