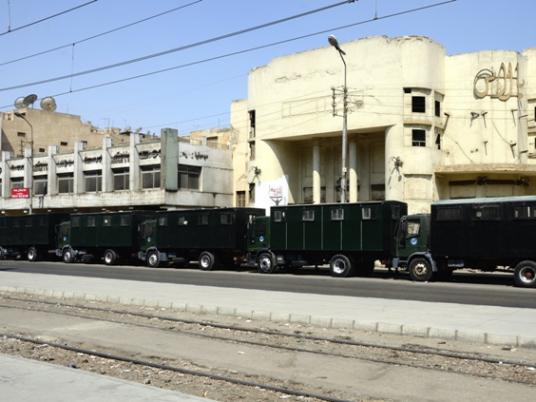 Protesters in support of President Mohamed Morsy started to leave the area around the presidential palace after the president concluded his speech, state-run MENA news agency reported. Thousands protested at the palace throughout the day on Friday to show support for Morsy’s new constitutional declaration issued Thursday evening.

Morsy delivered his speech late Friday afternoon, in which he said he would not allow groups with private interests to hire "thugs" to attack state institutions.

"We will not allow using money that was gathered through corruption under the former regime to destroy the gains of the revolution," Morsy said.

"I tell you clearly, I was, still am and will stay with what the Egyptian street wants …  and what [people] determine in the framework of a clear legitimacy that is irreversible," Morsy said.

"I am not making a decision to use against someone or to announce that I align with one side against another, but I want to put myself on a clear path that leads to achieving a clear objective.”

The president gave a warning against those he described as "taking shelter in judiciary."

"I tell them do not ever imagine that I do not see you. I was just disregarding what you were doing. Who brought them? They were crying in tears for the [fall] of the former regime.”

Morsy stressed that the constitutional declaration issued on Thursday was not intended to settle accounts. "I see that the judicial rulings are made known two weeks and more before the court session is held, how is that?"

The real revolutionaries and political opponents are different from the childish thugs who beat the police in Mohamed Mahmoud, who were paid with "corrupt money" from former regime figures, Morsy claimed.

Morsy went on to claim that the legislative powers were transferred to him after the dissolution of the People's Assembly, but he wishes that didn’t have to be the case. Taking on legislative power was a heavy load he was forced to take as a solution, and he would never use that power as leverage against political opponents, he said.

Salafi and Brotherhood figures were gathered in front of the palace for the speech to show support for the constitutional declaration issued by the president on Thursday evening.

The demonstrators chanted slogans demanding the trial or former Prosecutor General Abdel Meguid Mahmoud, and chanted “Freedom, justice, Morsy is backed by men,” and “Free revolutionaries, we will support the decision.”

The Islamist protesters began gathering outside the presidential palace in Heliopolis on Friday morning.

The protesters were mainly comprised of Muslim Brotherhood and Freedom and Justice Party members, as well as members of some Salafi groups.

They set up a stage and speakers on the sidewalks of Merghany Street, and also hung speakers from lamp posts.

Islamist forces announced Thursday evening their support of the seven-article declaration, which ordered for a retrial of all those responsible for the deaths of protesters during the revolution.

By the time of the announcement of the declaration, dozens of protesters had already gathered outside the High Court to show support.