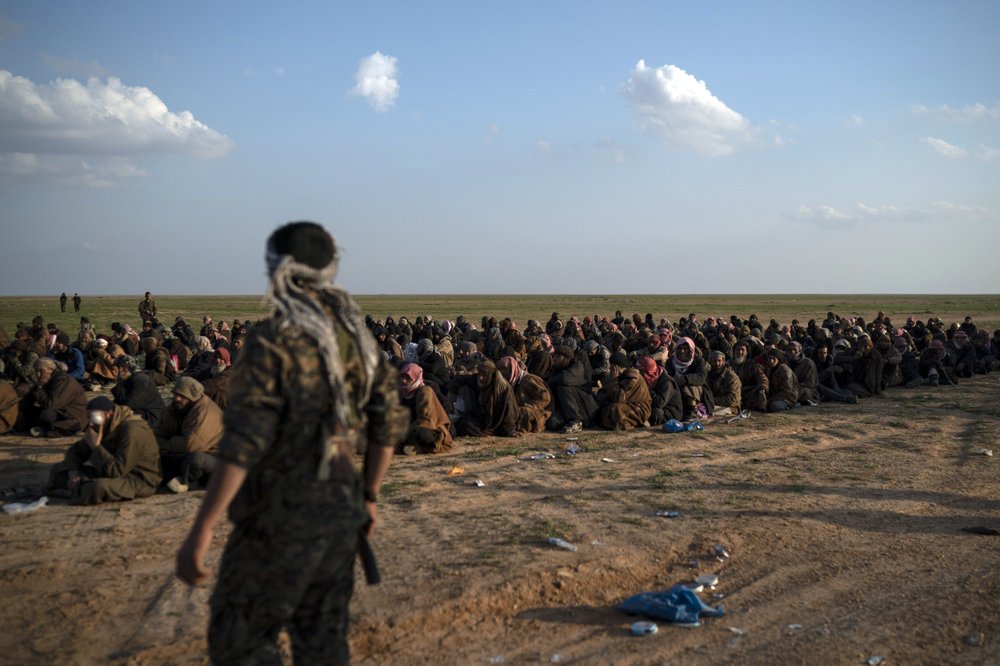 BEIRUT (AP) — The American pullback from parts of northeastern Syria could help breathe new life into the Islamic State group if fighting erupts between the Kurds and Turkey.

Syrian Kurdish authorities are already struggling to guard IS fighters captured during the long U.S.-backed campaign against the militants and to keep a lid on IS supporters and family members thronging displacement camps. Their hold will suffer even more if they are fighting Turkey.

The White House has said Turkey will take over responsibility for the thousands of imprisoned fighters. But it is not clear how that will happen, if it all, given that the Kurdish forces are Turkey’s nemesis.

Turkey is sending troops along the border in preparation for an offensive against the Syrian Kurds. Ankara has said it wants to impose a zone of control potentially 30 kilometers (19 miles) deep that would stretch the length of the border. The Kurdish-led Syrian Democratic Forces have vowed to fight back.

Here is a look at what is at stake and why IS stands to gain.

Angered by the sudden pullback of U.S. troops, Kurdish officials sounded the alarm that, to fight any Turkish assault, they will have to divert their forces away from guarding IS prisoners. That raises security concerns at a time when the Islamic State group’s leader, Abu Bakr al-Baghdadi, has called on followers to do all they can to free captured fighters held in jails and families living in camps.

Kurdish authorities run more than two dozen detention facilities, scattered around northeastern Syria, holding about 10,000 IS fighters. Among the detainees are some 2,000 foreigners, including about 800 Europeans.

Most of the facilities are unidentified and unmarked, some of them set up in abandoned or repurposed buildings; others are mobile “pop-up prisons.” Some are reportedly close to the border, which may make them vulnerable to being hit in clashes or bombardment.

Guarding those facilities has long been a strain on the Kurdish-led Syrian Democratic Forces as it juggles multiple tasks in the volatile area. The U.S-led coalition has said the force doesn’t have the capacity to detain thousands of fighters on its own — and the coalition may be helping to hold some of the most high-level militants.

Handling the prisons while defending against Turkish troops will be even more difficult.

“How will I even protect these facilities?” Abdulkarim Omar, a senior Kurdish official, said. “The Turkish attack is an existential threat. (The Kurdish) forces will be busy with fending it off.”

At least two prison facilities, including a former government prison, are located in Qamishli and Hassakeh, where Syrian government forces maintain a presence, even though the cities are largely administered by the Kurdish-led group.

Turkish-backed Syrian fighters who will likely join any Turkish offensive may have links or sympathies with the local IS detainees. The Rojava Information Center, a pro-SDF research group based in the Kurdish-held areas, said it has documented at least 40 former IS fighters now in the Turkish-backed forces. Foreign fighters who joined IS originally found their way to Syria through Turkey, and it was widely believed Turkish authorities turned a blind eye at the time.

An outbreak of fighting would also likely mean laxer control over the three Kurdish-run camps holding IS families and die-hard supporters that are potential engines for recruitment for the group. The Kurdish-led forces have already been struggling to secure them and provide humanitarian aid in the often chaotic camps.

The camps are farther away from the border and outside the safe zone Turkey wants to create, so it is not clear how Turkey would take control of them. It is highly unlikely the Syrian Democratic Forces would coordinate with Ankara to hand them over.

The camps are rife with IS support. Al-Hol has been called the cradle for a new militancy, and the coalition has said IS is actively recruiting new members there. Some of the foreign women have organized an IS-style religious police to impose their own rules, often using violence, and children are often radicalized in the camps.

Despite its territorial defeat, IS has maintained an insurgency in Iraq and Syria, carrying out suicide bombings, assassinations and ambushes. Some reports suggest 14,000 to 18,000 IS members remain in Syria and Iraq, including 3,000 foreigners, but a recent report by the inspector general of the Department of Defense said figures from experts greatly vary.

IS militants have carried out 80 to 90 attacks in Kurdish-held areas of Syria. In August alone, IS militants claimed 78 attacks, according to the Rojava Information Center, including the assassination of Kurdish fighters and explosive devices planted near patrols. The group has also been reviving financial networks through extortion, “taxing” the local population or collecting ransoms from kidnapping.

IS could also easily exploit tension between Kurdish-led forces and Arab tribes, for instance, over control of the resources in the oil-rich east, to recruit new members.

Dareen Khalifa, a Syria analyst with the Brussels-based International Crisis group, said a Turkish operation against the Kurdish forces would destabilize the northeast, create a new wave of displaced and refugees near the border and divert the local Kurdish forces from fighting the remnants of IS — “potentially enabling them to regain their potency and expand to other areas.”

FILE – In this Feb. 22, 2019 file photo, U.S.-backed Syrian Democratic Forces (SDF) fighters stand guard next to men waiting to be screened after being evacuated out of the last territory held by Islamic State group militants, near Baghouz, eastern Syria. The IS could get a new injection of life if conflict erupts between the Kurds and Turkey in northeast Syria as the U.S. pulls its troops back from the area. The White House has said Turkey will take over responsibility for the thousands of IS fighters captured during the long campaign that defeated the militants in Syria. But it’s not clear how that could happen. (AP Photo/Felipe Dana, File)