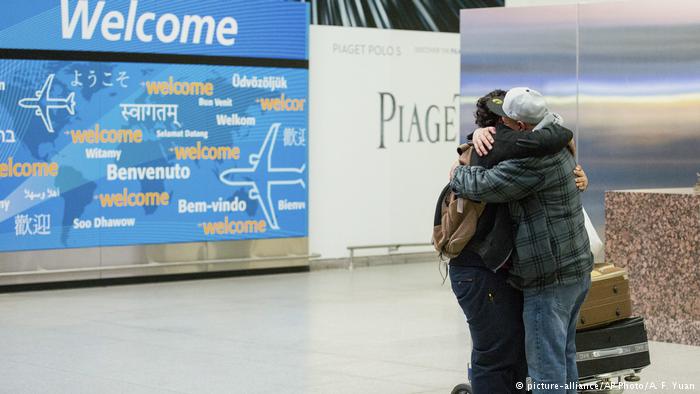 Donald Trump has won a Supreme Court victory, with seven justices voting to allow his latest travel ban to go into full effect. The administration’s selective order has been challenged by rights lawyers as a Muslim ban.

On Monday, the US Supreme Court allowed President Donald Trump’s travel ban to take effect pending appeal. In a 7-2 ruling, justices granted his administration’s request to lift two injunctionsimposed by lower courts that had partially blocked the ban — the third version of a policy that Trump first sought to implement a week after taking office.

Modified after failed versions that had sought to exclude people from six Muslim-majority nations, the temporary ban covers people from Iran, Libya, Syria, Yemen, Somalia and Chad, with North Koreans and certain government officials from Venezuela added to the current version.

The bans were roundly criticized as discriminatory, and courts ruled that Trump could not prevent people who had “bona fide” relationships with people in the United States from entering the country. That included grandparents, cousins and other relatives whom Trump had sought to keep out.

In a pair of single-page orders on Monday seven of the US’s top nine justices put a halt to lower court rulings that had blocked parts of the ban while appeals continue in San Francisco and Richmond, Virginia — with rulings expected later this week. Two of court’s liberal justices, Ruth Bader Ginsburg and Sonia Sotomayor, said they would have denied the administration’s request.

“We are not surprised by today’s Supreme Court decision permitting immediate enforcement of the President’s proclamation limiting travel from countries presenting heightened risks of terrorism,” the White House said after the Supreme Court’s announcement.

“The proclamation is lawful and essential to protecting our homeland. We look forward to presenting a fuller defense of the proclamation as the pending cases work their way through the courts,” it added.

Omar Jadwat, the director of the American Civil Liberties Union (ACLU), which has been representing some opponents of the ban, said the Supreme Court’s decision did not undermine the case against the ban.

“It’s unfortunate that the full ban can move forward for now, but this order does not address the merits of our claims,” he said.

In the majority opinion, the remaining justices said they expected the lower courts to reach decisions “with appropriate dispatch.” Quick resolution would allow the Supreme Court to hear and decide on the issue before its current term ends, in June.

Trump issued his first ban after taking office in January and then put forth a revised version in March after federal courts blocked it. As appeals continued, the second one ultimately expired in September, with the administration quickly putting forth the present version.

The American Civil Liberties Union and the state of Hawaii have challenged the administration’s order in separate lawsuits, with lawyers arguing that it amounts to a ban on Muslims, which would violate the constitution’s pledge of religious freedom and therefore fall afoul of US immigration laws.