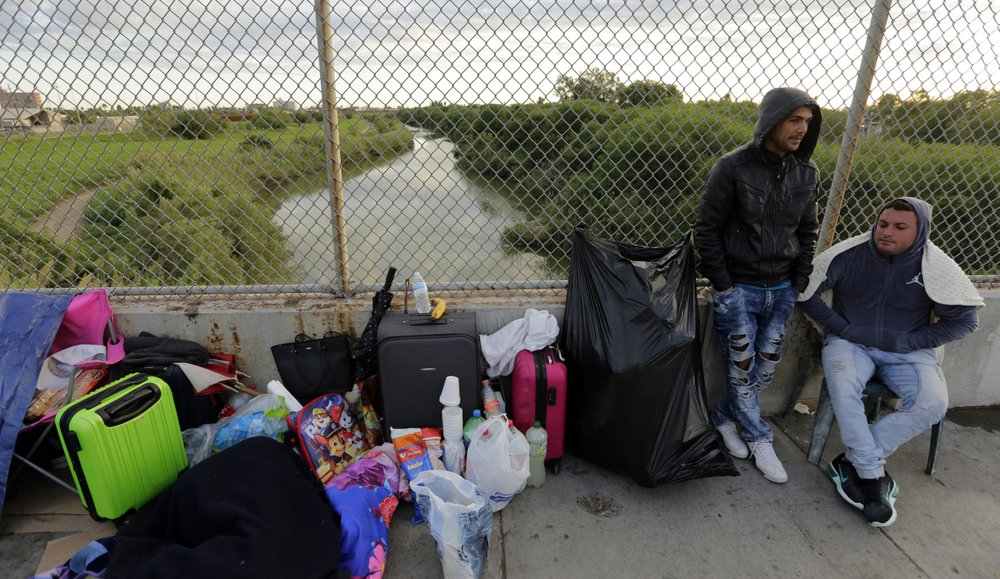 HOUSTON (AP) — The US government on Friday expanded its requirement that asylum seekers wait outside the country to a part of the Texas Rio Grande Valley across from one of Mexico’s most dangerous cities.

The Department of Homeland Security said that it would implement its Migrant Protection Protocols in Brownsville, Texas, across the border from Matamoros, Mexico. DHS says it anticipates the first asylum seekers will be sent back to Mexico starting Friday.

Under the so-called “Remain in Mexico” policy, asylum seekers are briefly processed and given a date to return for an immigration court hearing before being sent back across the southern border. Since January, the policy has been implemented at several border cities including San Diego and El Paso, Texas. At least 18,000 migrants have been sent back to Mexico under the policy, according to Mexico’s National Migration Institute.

The US is trying to curtail the large flow of Central American migrants passing through Mexico to seek asylum under American law. The busiest corridor for unauthorized border crossings is the Rio Grande Valley, at Texas’ southernmost point. Other cities in the region were not immediately included in the expansion.

The policy announcement came as groups of lawmakers visited the region Friday to examine detention facilities operated by the US Border Patrol, including the processing center in McAllen, Texas, where hundreds of adults and children are detained in fenced-in pens.

Standing outside the processing center, Sen. Jeff Merkley of Oregon criticized conditions inside the facilities and other Trump administration programs cracking down on asylum seekers.

“We want them treated with dignity and respect as we would want our family members to be treated,” Merkley said.

US Rep. Nanette Barragán, a California Democrat, tweeted that while visiting the processing center, she encountered a 13-year-old girl who was a US citizen and had her passport with her. The girl was held with her mother despite the facility being designed for immigrants in the US without legal permission, not citizens, Barragán said.

US Customs and Border Protection said that the mother and daughter had been apprehended crossing the border illegally after the teenager had crossed into Mexico to meet her mother. CBP said the two were detained at the processing center for about five hours and released Friday afternoon.

DHS said it had coordinated with the Mexican government to expand its “Remain” policy. The Mexican government did not immediately respond to requests for comment. But the Trump administration has pressured Mexico to crack down on migrants, threatening earlier this year to impose crippling tariffs until both sides agreed on new measures targeting migration.

Matamoros is at the eastern edge of the US-Mexico border in Tamaulipas state, where organized crime gangs are dominant and the US government warns citizens not to visit due to violence and kidnappings.

The city is also near where a Salvadoran father and his 23-month-old daughter were found drowned in the Rio Grande, in photos that were shared around the world.

Many people have slept for the last several months in a makeshift camp near one of the international bridges, including families with young children. Thousands more stay in hotels, shelters, or boarding houses. Only a few migrants daily have been allowed to seek asylum under another Trump administration policy limiting asylum processing known as “metering.”

A list run by Mexican officials has more than 1,000 people on it, said Elisa Filippone, a US-based volunteer who visits Matamoros several times a week to deliver food and donated clothes. But many others not on the list wait in shelters. There are frequent rumors that migrants are shaken down for bribes to join the list, Filippone said.

She described a desperate situation that could be made worse if people are forced to wait longer in Mexico for their asylum claims to be processed.

“I’m afraid that Matamoros is about to catch on fire,” she said.

Filippone said Friday that she saw the camp closest to one of the bridges being cleared away, though it was not immediately clear why or where the people detained would go.

DHS recently implemented the “Remain” policy for migrants in Nuevo Laredo, across from Laredo, Texas. About 1,800 asylum seekers and migrants are currently waiting in Nuevo Laredo, where some have reported being kidnapped and extorted by gangs.

“I don’t want to go out on the street. I’m afraid the same men … will do something to me or my boys,” said one woman, insisting on speaking anonymously out of fear for their safety.

People in Nuevo Laredo were told to return in September for US court dates. At other points of the border, wait times have stretched to several months.

Unlike in criminal court, the US government does not have to provide lawyers to people in the immigration court system. Attorneys in South Texas have long questioned where they could meet with potential clients in Tamaulipas.

Many migrants who get to the US have exhausted all their resources by the time they arrive, said Lisa Brodyaga, an attorney who has represented asylum seekers for decades.

“It would be extremely difficult for them to find attorneys who would have the time and the ability and the willingness to expose themselves to what’s going in Matamoros,” she said. “I’m not sure how it’s going to work.”

Image: FILE – In this Nov. 2, 2018, file photo, Yenly Morales,left, and Yenly Herrera, right, immigrants from Cuba seeking asylum in the United States, wait on the Brownsville and Matamoros International Bridge in Matamoros, Mexico. The US government will expand its policy requiring asylum seekers to wait outside the country in one of Mexico’s most dangerous cities. According to officials for two congressional Democrats, the Department of Homeland Security says it will implement its “Migrant Protection Protocols” in Brownsville, Texas, across the border from Matamoros, Mexico. Matamoros is in Mexico’s Tamaulipas state, which the US government warns citizens not to visit due to violence and kidnappings.(AP Photo/Eric Gay, File)

As US agents prepare to arrest 'thousands,' migrants live in fear