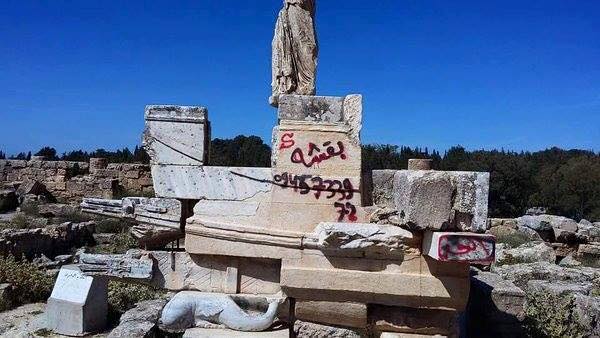 SHAHAT, Libya (Reuters) – Graffiti covers the ruins of Cyrene in eastern Libya, a city founded by Greeks more than 2,600 years ago that once attracted tourists but is now neglected and the target of vandals.

Insecurity and looting has hit Libya’s archaeological sites in the chaos and fighting that has followed the overthrow of Muammar Gaddafi in 2011, as rival groups struggle to consolidate control of the country.

Libya is home to five of UNESCO’s World Heritage sites, listed for their outstanding universal value. The sites include the ruins of the Roman city of Leptis Magna and Sabratha, which is famous for its amphitheater.

There are also prehistoric rock carvings in the Akakous mountains deep in the southern Sahara desert near the border with Algeria.

In the east, tourists once trekked to Cyrene, a site founded by Greeks and later expanded by Romans, nestled in the mountains some 200 km (124 miles) east of Benghazi.

But with foreign tourists gone and the sites visited only by Libyan families on weekend trips, locals have seized land at the sites and vandals have even smeared graffiti on columns and walls.

That presents a challenge to local authorities trying to protect the ruins located in the small community of Shahat.

“In Cyrene, instead of speaking to one owner, now we speak to 50 with different backgrounds,” said Ahmad Hussein, the head of the antiquities department of a parallel administration in charge of eastern Libya.

“Some of the owners have built houses on these sites,” he said.

The challenge is worsened by a law in 2013 that allowed people to reclaim land confiscated under Gaddafi. Some people took that literally and annexed what they felt they deserved.

Hussein wants to hold those who seized land accountable.

The effort to preserve ruins is further hampered by the fact that Libya has two governments. One administration backed by the United Nations sits in Tripoli, while the east has a parallel government.

In a rare positive sign, Hussein said that about 1,700 artifacts had been returned since 2011 after they were looted inside the country. Many other items are smuggled abroad though.

Leptis Magna in northwestern Libya has been able to escape vandalism thanks to local history fans and relative security at its location near the city of Misrata.

Sabratha has been repeatedly hit by fighting between rival factions and UNESCO last year issued an appeal to protect the site. The site received no help.

In the capital Tripoli, a lone director is trying to preserve some 18 Roman graves, dating back some 1,700 years which were found in 1958 in the western suburb of Janzour.

“There is no support for this site,” said al-Amari Ramadan Mabrouk, director of the Janzour antiquities office.

“I cannot give a number for tourists who visit Libya … but I can say that, before 2011, tourism was popular in Libya,” he said.