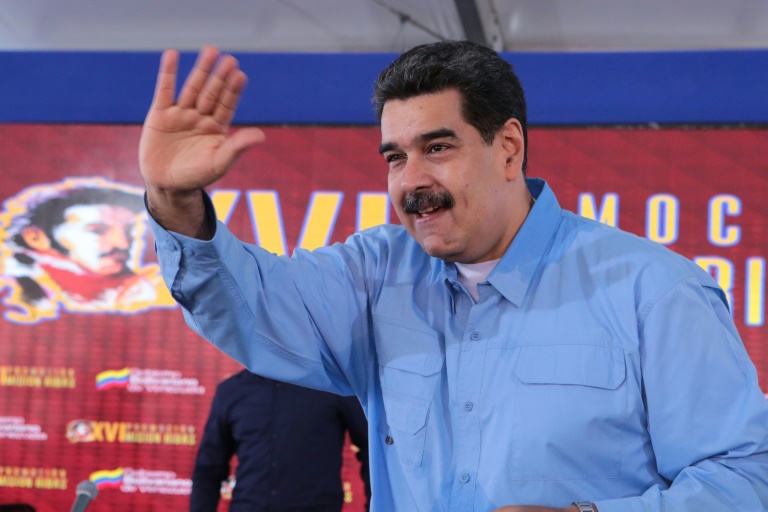 Venezuela braced Saturday for another day of nationwide protests after President Nicolas Maduro clamped down further on opposition leader Juan Guaido, locking up his deputy in a military prison following a dramatic arrest.

Edgar Zambrano, deputy speaker of the opposition-majority National Assembly, is being held in preventive detention for “the flagrant commission of the crimes of treason, conspiracy and civil rebellion,” the Supreme Court said in a statement announcing the verdict of a lower court.

Zambrano was arrested by Maduro’s SEBIN intelligence service in dramatic circumstances on Wednesday for supporting the April 30 revolt organized by US-backed Guaido.

Maduro also accused his sacked intelligence chief of being a CIA “mole” and the architect of the failed military uprising.

He said General Christopher Figuera was “the one who orchestrated the coup d’etat” by contacting the group of around 30 members of the armed forces who joined Guaido’s mass demonstration.

“He was captured by the CIA a year ago and was working as a traitor, mole and infiltrator,” Maduro said of Figuera, whose defection to the opposition saw him rewarded earlier this week by the US, which removed him from its sanctions list.

The latest regime actions ratcheted up tensions ahead of a national demonstration Guaido called for Saturday to reject measures taken by the Supreme Court against opposition lawmakers.

Zambrano is one of 10 charged by the Supreme Court for participating in the April 30 movement.

He was transferred to the Caracas headquarters of the military police, Fort Tiuna, the court said.

One of the other charged lawmakers, Luis Florido, announced in a video on Friday that he had fled to neighboring Colombia, “sheltered from a regime that is willing to imprison deputies,” he said.

Three others — Richard Blanco, Mariela Magallanes and Americo De Grazia — have sought refuge in the Argentine and Italian embassies in Caracas.

Zambrano’s lawyer Lilia Camejo denounced the procedure under which Zambrano, a civilian, was sent to a military prison, and said his rights had been violated.

“From the moment of the arrest, they have violated the deputy’s rights. We did not have access to the file, nor could we be appointed in his defense,” Camejo told reporters.

Guaido said on Thursday the arrests were part of a bid by Maduro to dismantle the National Assembly legislature, Venezuela’s sole opposition-controlled institution but one which had already been rendered powerless by the pro-Maduro Supreme Court.

“If we can talk about a coup d’etat in Venezuela, here it is: the dismantling of the national parliament,” Guaido told a news conference, accusing Maduro’s regime of “state terrorism.”

The increase in regime repression “may be a precursor” to targeting Guaido himself, said Latin American analyst Risa Grais-Targow of Eurasia Group. “Zambrano’s arrest may be a test to gauge the response of the international community before it moves against Guaido.”

His arrest on Wednesday night was both bizarre and dramatic. The lawmaker commented on events live on Twitter as they unfolded.

The 64-year-old’s car was surrounded outside his Democratic Action Party’s headquarters before it was towed, with him still inside, to the notorious Helicoide prison inside SEBIN headquarters.

Guaido’s latest attempt to undermine armed forces support for the embattled Maduro fizzled out after two days of clashes between protesters and the security services that left several people dead.

Venezuela was plunged into turmoil in January when Guaido declared himself acting president in a direct challenge to Maduro’s authority.

He has since been recognized by more than 50 countries as he steps up the pressure to oust Maduro, whom he considers illegitimate after 2018 elections widely seen as fraudulent.

But through months of crisis, Maduro — supported by China, Russia and his armed forces — has stood firm.

“The existing external and internal pressures have not been enough to convince Maduro and his inner circle to negotiate their exit ramp. What happens next in Venezuela is highly uncertain,” said Moises Rendon of the Center for Strategic and International Studies in Washington.

Separately on Friday, Venezuela announced it was re-opening its land border with Brazil after Maduro ordered it shut in February, frustrating Guaido’s attempt to bring stockpiled mostly-US humanitarian aid across the border.

Vice President Tareck al-Aissami said the frontier with Brazil was “once again restored,” and maritime links with the Caribbean island of Aruba were also reopened.

However, the border with Colombia and links with other parts of the former Dutch Antilles — closed at the same time on Maduro’s orders — will remain shut, al-Aissami said.

Venezuela has suffered more than four years of recession marked by shortages of basic necessities such as food and medicine.

The United Nations says a quarter of its 30 million population are in urgent need of aid, and more than 2.7 million have fled the deprivation.

US, Russia butt heads over Venezuela