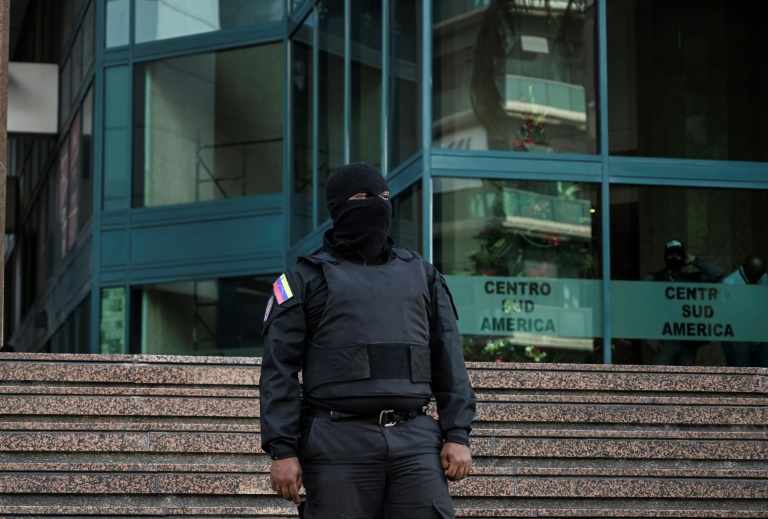 Agents from Venezuela’s Sebin intelligence service have raided the offices of opposition leader Juan Guaido while he is traveling in Europe, an opposition lawmaker said.

“We have just confirmed that Sebin officers are inside the office,” lawmaker Delsa Solorzano told reporters Tuesday after speaking with security guards at Caracas’s Zurich Tower.

National Assembly leader Guaido has been recognized as president by the United States and more than 50 other countries in his year-long power struggle with socialist President Nicolas Maduro, who earlier this year tried to block Guaido’s re-election as Assembly president.

The opposition said one of their lawmakers, Ismael Leon, was also arrested Tuesday on his way to the National Assembly.

“Cowardly dictatorship! While I am away, consolidating support to overcome the tragedy that we Venezuelans are enduring, they shamelessly show what they are all about,” Guaido, visiting London, wrote on Twitter.

However, in a series of tweets around midnight, the minister of communication and information denied Sebin officials had targeted the private office of the opposition leader, claiming it was an operation against two businessmen for money laundering.

The tower where the offices are located had been surrounded in the afternoon by hooded and armed Sebin officers dressed in black.

The offices were empty when the search began, the opposition said, adding that several lawmakers had been unable to gain access.

“Whatever procedure is under way, they are carrying it out without authorization… without witnesses, and they have no search warrant,” Solorzano said outside the building.

Venezuelan authorities made no comment on the report of the arrest of Leon.

The 36-year-old Guaido has defied a travel ban to fly to London for talks with Prime Minister Boris Johnson as part of a European trip which will include a visit to the World Economic Forum in Davos, Switzerland.

On Monday he visited Bogota, Colombia and met with US Secretary of State Mike Pompeo, who promised Guaido more US support in his effort to unseat Maduro.

Despite international backing, efforts to oust Maduro have stalled and he retains the support of the powerful armed forces, as well as that of allies China, Russia and Cuba.

Image: AFP / STR The tower where the offices of Venezuelan opposition leader Juan Guaido are located was surrounded by hooded and armed Sebin intelligence officers dressed in black

Guaido and rival both claim to be Venezuela's parliament speaker

Venezuela’s Guaidó urges nation back into the streets