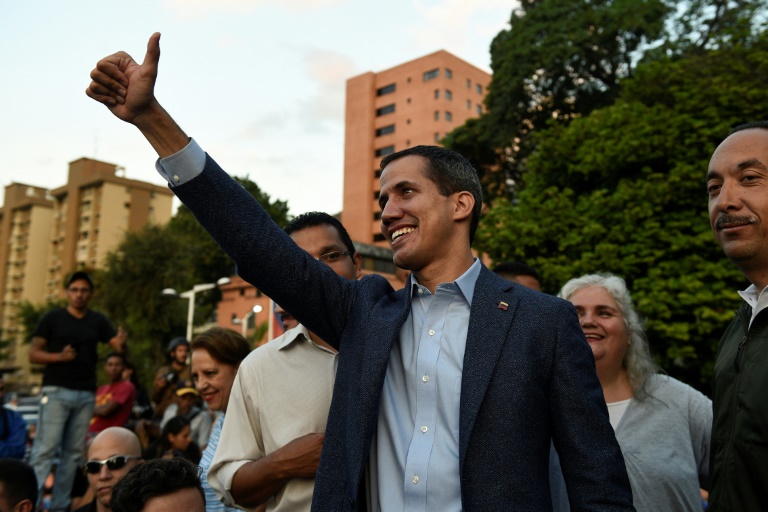 Venezuela’s opposition leader Juan Guaido urged his supporters to demonstrate in the streets Saturday to maintain pressure on his rival President Nicolas Maduro, amid rising anger over the collapse of public services.

Thousands of opposition supporters are expected to march through the capital Caracas from 11:00 am on Saturday as Venezuela’s power struggle is exacerbated by massive blackouts and the collapse of water supplies.

Guaido, recognized as interim president by more than 50 countries, said in a Twitter message on Friday: “Let’s remain firm in the streets, this fight is for the lives of all Venezuelans.”

Maduro, who blames US-backed sabotage on recent blackouts that deprived millions of power, has also called a pro-government march in Caracas, urging his supporters onto the streets for a “March in defense of peace.”

Guaido said earlier this week he feared abduction by government agents after pro-Maduro lawmakers stripped him of his parliamentary immunity on Tuesday and authorized the country’s top court to prosecute him for proclaiming himself president.

The United States, among the first countries to recognize Guaido when the National Assembly leader proclaimed himself interim president on January 23, meanwhile kept up the international pressure on Maduro to step down.

“The United States will continue to exert all diplomatic and economic pressure to bring about a peaceful transition to democracy,” Pence said in a speech in Houston, Texas.

“Venezuela’s oil belongs to the Venezuelan people,” he said.

“Those looking on should know this: All options are on the table. And Nicolas Maduro would do well not to test the resolve of the United States of America,” he said.

The action is the latest by the United States as it tries to choke off revenue for the cash-strapped leftist government, which has nonetheless held onto power and enjoys backing from China and Russia.

It comes ahead of a meeting of the UN Security Council next Wednesday, called by the US to discuss the worsening humanitarian crisis in the Latin American country.

“The United States will urge the world to reject Maduro’s failed regime, to stand with the Venezuelan people, and to help us bring the humanitarian crisis to an end.”

Venezuela’s oil economy has crumbled under the collapse of crude exports and international sanctions against Maduro.

The socialist president is viewed by the US and its allies as illegitimate since taking the oath of office in January for a second six-year term, following elections last May seen as deeply flawed.

Malnutrition and disease are on the rise as living conditions plummet in Venezuela, which is spiraling ever deeper into economic chaos during the protracted political crisis.

The blackouts have knocked out water supplies as well as transport and communications.

“We are tired but we have to go out on the street because it is the only way to get these people out,” said Verony Mendez, 48, adding that his household has been without water for two months.