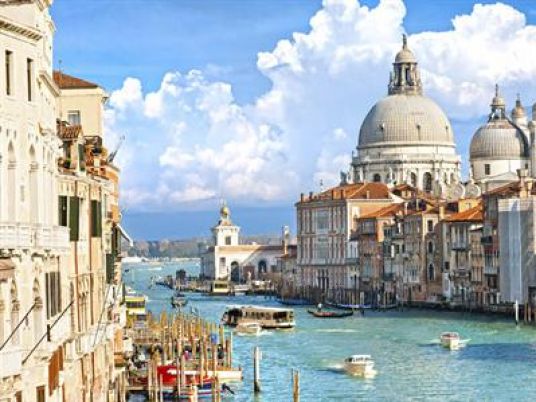 If you find the crowds that swirl around St Mark’s Square and the Rialto a little dismaying, why not take a look at Venice through the eyes of a different type of visitor — the writers who have haunted its canals and palazzos.

The list is long. One website describes nearly 200 literary works with links to Venice, from The Merchant of Venice to Death in Venice and, more recently, Michael Dibden’s Dead Lagoon, an Inspector Aurelio Zen mystery.

Here are two novelists — Simon Raven and Anthony Powell — who set books in Venice, both published in the 1970s and both highly readable. Some locations can be found without too much trouble, others will need more effort.

Powell and Raven both wrote multi-volume novel sequences charting British social life in the 20th century, Powell’s Alms for Oblivion series more scabrous than Raven’s stately A Dance to the Music of Time.

In The Survivors, the last in his 10-novel opus, Raven, once described as having “the mind of a cad and the pen of an angel”, brings his characters to Venice for a writers’ conference.

Delegates attend a party at the Scuola Grande di San Rocco, where surly waiters serve “perfectly revolting drinks”, in contrast to the Tintorettos that of course can still be seen on the walls of one of the city’s most stunning buildings.

The book also draws attention to the little-known island of San Francesco del Deserto, scene of the burial of Cambridge don Daniel Mond, who has died while staying in a palazzo hired by two businessmen running a casino in the hope of staving off financial ruin. Monks will show visitors around, but you will have to make your own way by boat from Burano.

In Temporary Kings, Powell also assembles his characters at a cultural conference, and sets one scene in the gardens where the Venice Biennale art exhibition is held.

The restaurant overlooking the water where the American playboy tycoon Louis Glober hosts a tipsy lunch is not named, but you could recreate the atmosphere anywhere nearby by ordering rounds of Punt e Mes vermouth and Strega liqueur. 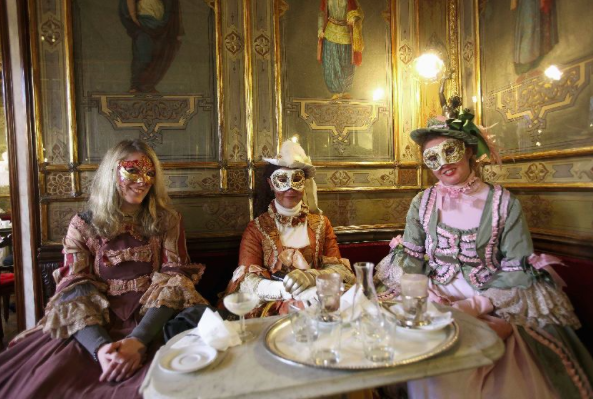 Masked revellers in the Caffe’ Florian in Saint Mark’s Square.

Like Raven, Powell also has his characters meet at Florian’s in St Mark’s Square, an historic cafe with a pricing structure that means its drinks become even dearer once the orchestra starts to play.

These days, drinkers must contend with tourists lining up to photograph the cafe. Powell described something similar when he wrote of crowds in the square moving “rhythmically backwards and forwards like the huge chorus of an opera”.

So if you want something cheaper and more secluded, the trick seems to be to find neighbourhood places.

These need not be far away. Well worth a visit are Do Mori and All’Arco, tiny bars near the Rialto that also serve cicchetti, small open sandwiches with fish or seafood, excellent with a glass of chilled, white Friuli wine. Cheaper than Florian’s, but none the worse for that.