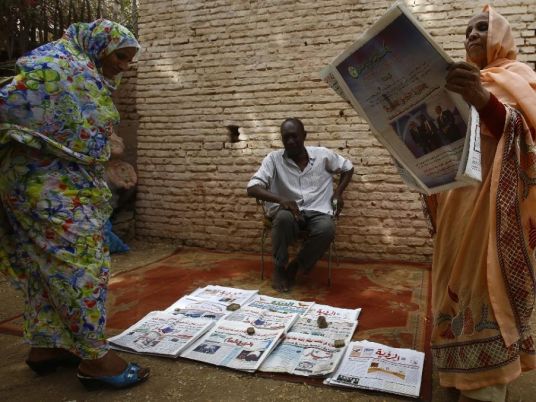 He has been a journalist in Sudan for six difficult decades, but with his country's press facing mounting pressure and censorship, Mahjoub Mohamed Salih says his job has never been so difficult.

A reporter since before Sudan's 1956 independence from Britain and Egypt, the 88-year-old founder of independent daily Al-Ayam has been arrested, banned from publishing and even seen his newspaper nationalised.

But never, he says, have he and other journalists had to deal with as much pressure as now.

"This is the most difficult period to work as a journalist," Salih says, wearing traditional white Sudanese robes and a turban as he speaks to AFP from his run-down office in central Khartoum.

Sudan's National Intelligence and Security Services (NISS) confiscated the Monday editions of the independent dailies Al-Jarida and Al-Tayar, apparently over stories they published about religious extremism, editors at the newspapers told AFP.

Bashir, who is wanted by the International Criminal Court on war crimes charges over the conflict in Darfur, has been repeatedly accused of cracking down on opponents.

But in May security agents seized copies of another 10 newspapers, apparently after they reported cases of child abuse on school buses, and temporarily banned four from publishing.

The NISS rarely gives explanations for its seizures.

Salih is no stranger to run-ins with Sudanese authorities.

He has been detained more times than he can remember, banned from publishing for two years in the 1950s, and his newspaper was nationalised for 16 years from 1970.

Instead of seeing hoped-for improvements in the country's press climate, he still worries every day.

"I keep my fingers crossed that tomorrow morning I don't get a telephone call telling me that my newspaper has not reached the reader," he says.

Salih's newspaper has been confiscated less often than some others, but fear of the financial losses he could suffer has made him cut his circulation to just 3,000 copies per day.

He estimates that newspapers with a wider circulation of 20,000 per day could lose up to 30,000 Sudanese pounds ($5,000/4,500 euros) per confiscation, a significant sum in a country where most newspapers sell for just two Sudanese pounds.

Sudanese reporters have worked under strict surveillance since Bashir seized power in a 1989 Islamist-backed coup.

They know reporting certain stories — corruption, the conflict in the western Darfur region and sensitive political issues — could see them detained, prosecuted or even attacked.

Pre-publication censorship was abolished in 2009 but little has changed. Sudan still ranked 174th out of 180 countries in RSF's 2015 World Press Freedom Index.

Instead newspapers face a long, unwritten list of off-limit topics.

"The whole picture is painted red, there isn't a red line," Salih says.

Officially, the information ministry and the government-run press council are meant to oversee the press and apply Sudan's media laws.

But the NISS has free rein to carry out its seizures, often without informing the press council or the editors of the newspapers.

"All press issues are dealt with by the security apparatus," Salih says.

Salih's counterpart at pro-government political daily Al-Intibaha, Alsadig Alrizagi, saw his newspaper's print license suspended for more than two weeks in May over an article that mentioned child abuse in Sudan.

"In the past, the security apparatus had red lines, linked to politics and security. But now the last confiscation of 10 newspapers was because of an article about a social issue," said Alrizagi, who also heads Sudan's journalists' union.

As is the case with most raids, there was no official explanation from the NISS for the latest seizure of newspapers, Salih says.

"We have to resort to guesswork and this is an unprecedented situation."