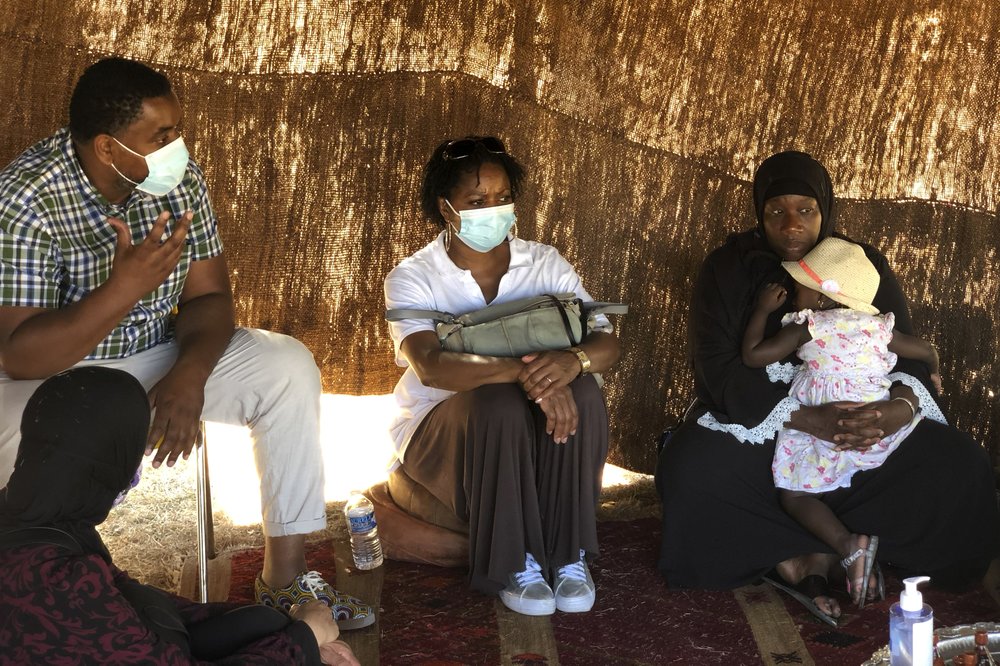 After the pandemic broke out, they set up daily food and hygiene kit distribution points, and launched a phone application to coordinate NGOs distributing food — as well as translating public health information into the multiple languages spoken in the diverse communities.

Jacqueline Mendy, a Black mother of two, was among the fifty or so people who came to a tent that Banlieues Santé set up last week in her local park in the Paris suburb of Bondy, whose surrounding Seine-Saint-Denis region saw France’s highest mortality rate from the virus. She came with her son to ask some health questions, and learned about a free medical checkup for young women that she didn’t know about.

“I hadn’t thought of asking the question” about preventive health to her family doctor, Mendy told The Associated Press. Usually, she said, “when I go to my doctor, it’s because there’s an illness, or [the children] have a fever or something like that.”

Banlieues Santé attracted people to their tents with a Moroccan percussion and trumpet band that sang to curious onlookers. The nurses and social workers spoke French but also five other languages, and handed out masks, gel and other basics to families.

The COVID-19 crisis has re-focused attention on the health care challenges that have long plagued areas like Seine-Saint-Denis.

Last month, a study from the national statistics agency revealed mortality rates rose disproportionately higher for Africa- and Asia-born people in France compared to the France-born populations during the first months of the pandemic. Another study by French economists showed France’s poorest cities in high-infection regions suffered more deaths than richer cities. The study pointed to “a higher share of workers frequently in contact with the public and a higher share of overcrowded housing.”

“The sickest are those the furthest out [from mainstream society], because of the cultural or linguistic barrier,” as well as those who can’t afford supplemental insurance that makes it easier to access specialized treatment, El Badaoui told The AP.

The French health care system is meant to provide accessible medical treatment for all, but years of cost cuts left it stretched when the virus hit. The system’s bureaucratic demands and co-payments often scare away new immigrants or the very poor. And sometimes patients must travel far to reach a specialist, which not everyone can afford.

As the virus spread across France, the overall mortality rate in Seine-Saint-Denis increased 129 percent in March and April compared with the previous year — the highest rise in the country.

Marie Pastor, a health official for Seine-Saint-Denis, outlined three main reasons: First, the department has a disproportionate rate of people with co-morbidities — for example, it has the highest rate of diabetes in mainland France. Second, a scarcity of general practitioners contributes to a “feeling of distance from institutions” and discourages people from seeking treatment, she said. Finally, the high concentration of essential workers among the region’s population made it harder for people to protect themselves and their families.

A study ordered by the Paris regional health agency found the same reasons — but didn’t recommend specific measures to address the situation.

Seine-Saint Denis has twice the unemployment rate of the national average, a third of its population is immigrant, and many more are descendants of immigrants. And in five years, it lost 8% of its general practitioners, despite a growing population.

Around France, minorities face other medical challenges. Last October, France’s top official for defending citizens’ rights reported that it is 6.5 times harder for people with “Muslim African names” to get psychiatry appointments than others. Despite calls by the government human rights watchdog to investigate discrimination in health care, there is little research on the topic because race-based research runs against France’s doctrine of colorblindness.

Talking about racism in French health care can prove difficult. Last week, a Twitter user published a list of Black health care professionals in France used by Black communities to find doctors less likely to discriminate against them. The very idea of such a list met heavy pushback. The Health Ministry expressed its “shock,” and the national doctors’ council denied any discrimination among French doctors.

Experimental COVID-19 vaccine is put to its biggest test