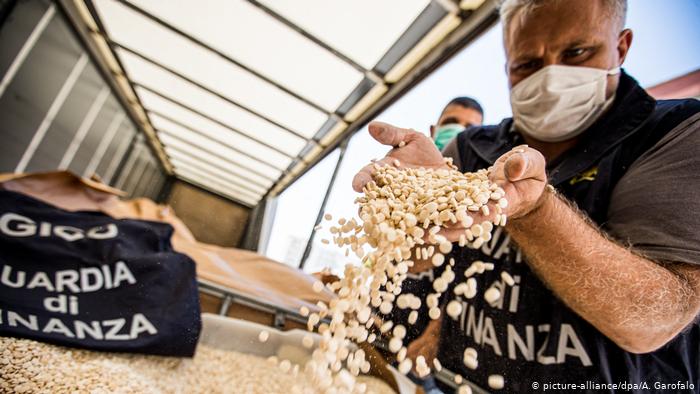 A video from the Guardia di Finanza, a financial crime and smuggling investigations unit attached to the Ministry of Economy and Finance, shows officers using circular saws to cut their way into industrial paper cylinders shipped from Syria.

Thousands of tablets, identified by police as captagon, come streaming out of the holes, filling dozens of large containers. Officials say in total they seized 84 million tablets weighing 14 tons (12,700 kg) — almost enough to supply the whole of Europe, according to the police. Their estimated worth is €1 billion ($1.13 billion).

It was slick PR. But there was something even more remarkable about the accompanying statement. It claimed the drugs were shipped from Syria by the terrorist group “Islamic State” (IS).

According to the Guardia di Finanza, the amphetamine tablets all bear “the symbol of the ‘captagon,’ which distinguishes the ‘Jihad drug’ made by IS.” The drug got its nickname after IS militants admitted to taking it to stay awake and not feel fear or pain during battle.

The statement continues, “It is known, in fact, that IS / Daesh [Arabic acronym for IS] finances its own terrorist activities especially by means of drug trafficking — the synthetic ones massively produced in Syria — which has become for this reason in recent years the first world producer of amphetamines.”

‘Highly unlikely’ IS could produce so much

But experts on terror groups and Syria immediately raised their doubts. IS has lost almost all its territory since its high point in 2014, its forces are diminished. Charles Lister, director of the Middle East Institute’s Syria program, tweeted that “This story doesn’t add up… at all.”

This story doesn't add up… at all.

There's no way #ISIS has the capacity to produce narcotics, especially at this scale. Beyond hard to fathom.

Aymenn Jawad al-Tamimi, a Syrian expert at Swansea University, told DW that “given the group’s current limited capabilities on the manufacturing level, [it] seems unlikely they could have made such vast quantities of the drug at the present time.”

War reporter and senior fellow at Yale University’s Jackson Institute for global affairs Janine di Giovanni raised similar doubts. “All I can say is it seems highly unlikely IS could produce such a cache of drugs given the fact that they are, in the words of one of my colleagues, ‘living in caves in Syria and Iraq,” she wrote to DW.

Another stumbling block for the Guardia di Finanza’s claim was the port from which they said the captagon had been shipped. Latakia, a harbor city on Syria’s Mediterranean coast, has remained a safe distance from IS’ clutches. It always has been in the hands of President Assad.

When DW put these doubts to the Italian authorities, they pulled back from the certainty of their statement. “At the moment we have not confirmed that the drugs were produced by IS in Syria, the investigation is ongoing,” Colonel Giuseppe Furciniti, head of the Investigative Group on Organized Crime of the Guardia di Finanza, told DW.

“I don’t know why the title of the press release says this, there must have been a communications problem.”

Colonel Furciniti did maintain, however, that IS had been known to manufacture the drug in Syria.

Many groups sell captagon in the Middle East

That much is true. IS did make captagon, both for its own fighters and to sell across the Middle East for profit. According to the United Nation’s World Drug Report 2020 the Middle East, and Saudi Arabia in particular, are by far the largest market for the pills, which are often a mixture of amphetamines and caffeine.

But IS are far from the only ones. Other criminal gangs and the Lebanese Hezbollah militia have also been linked to captagon. “In the last few years the main production cities were definitely in Lebanon and Syria,” Thomas Pietschmann, a senior research officer at the UN Office on Drugs and Crime, told DW.

“Whether it mostly came from IS or one of the many other groups has always been up for debate. It’s not just IS, but any number of groups that have been making it.”

A lot of what has been made more recently has been shipped out of Latakia. In February 5.6 tons of captagon tablets were found hidden in a shipment of electricity cables to Dubai. In June last year Greek authorities stopped a shipment of 33 million pills hidden inside wooden pallets, shipped from Latakia.

The amounts of captagon being shipped, the port of origin and the methods used to try and hide the pills means some suspicion is beginning to fall on President Assad’s regime.

According to German weekly magazine Der Spiegel, Assad’s uncle, Samer Kamal Assad, runs several captagon factories disguised as packaging companies in a village south of Latakia. The paper cylinders containing the pills were allegedly manufactured in a factory recently set up in Aleppo, meaning its address does not yet appear on any sanctions lists.

The Italian authorities said there were currently “no such connections” when asked by DW if Syria’s regime could be behind the shipment.

Italy seizes 14 tons of amphetamines, said to be IS-made