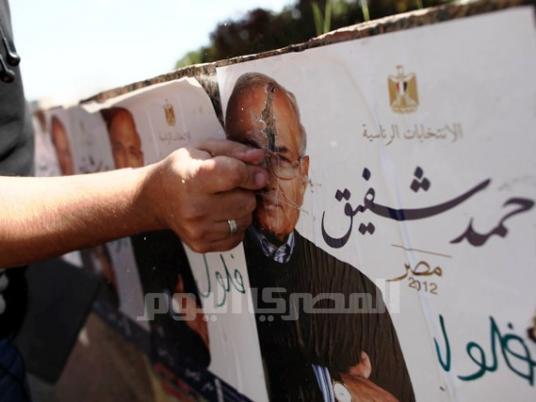 In its meeting Tuesday evening, the commission decided to exclude Shafiq from the list of the candidates running in the presidential election, slated for 23 and 24 May, under the political isolation law approved by the Supreme Council of the Armed Forces Monday, reports the state-run Al-Ahram daily.

The law withdraws political rights from all those who have, in the 10 years prior to Mubarak’s departure on 11 February 2011, assumed the post of president, vice president, prime minister, president or secretary general of the dissolved National Democratic Party, or member of the party’s general or policies secretariats.

Accordingly, Shafiq’s campaign spokesperson warned against any attempt to exclude his candidate, describing it as an overstepping of power and a constitutional transgression. He stressed that Shafiq’s legal position is sound, says Al-Ahram.

As for Muslim Brotherhood candidate Mohamed Morsy, the privately owned Al-Dostour newspaper reports that the group has decided against using its traditional slogan, “Islam is the solution,” in Morsy’s campaign. Instead, a campaign statement said Tuesday that Morsy’s slogan will be “The Renaissance is a nation’s will.”

Independent Al-Tahrir daily reports that the Salafi Dawah, an ultraconservative group based in Alexandria, has been meeting with Morsy and presidential candidate Abdel Moneim Abouel Fotouh, a former Brotherhood leader banned from group after announcing his candidacy before the group made its final decision to field a candidate.

The Salafi group held a vote between the two candidates after the disqualification of Brotherhood Deputy Supreme Guide Khairat al-Shater and Salafi preacher Hazem Salah Abu Ismail. While the majority of members were inclined toward Abouel Fotouh, there is also a large contingent that favors Morsy, says Al-Tahrir.

On Tuesday, People’s Assembly Speaker Saad al-Katatny announced the house’s rejection of a Cabinet-issued briefing on the state of affairs in the country, amid a wave of applause from the MPs, reports state-run Al-Gomhurriya.

Katatny cited Article 133 of the deactivated 1971 Constitution, which states that the Cabinet has to resign if Parliament rejects its briefing.

But Katatny disregarded the current interim constitution’s silence on that matter, adds Al-Gomhurriya.

Parliament rejects Prime Minister Kamal al-Ganzouri and the Cabinet’s briefing due to the gap between the people’s needs and what the government has achieved, Deputy People’s Speaker Ashraf Thabet said during Tuesday’s general session.

But that doesn’t mean the government will have to step down, according to an official Cabinet source, who told Al-Gomhurriya that Parliament’s vote against the Cabinet’s statement or the withdrawal of confidence from it doesn’t affect its continued operation until 30 June, when a new president is elected. The source added that Field Marshal Hussein Tantawi, head of the ruling military council, is the only one who has the power to dissolve the Cabinet.

Responding to rumors about the possibility of dissolving Parliament on claims of it being unconstitutional, Hatem Bagato, the top judge of the Supreme Constitutional Court and Presidential Elections Commission secretary general, said that is unlikely.

He said the court’s final report on the parliamentary elections law did not find the elections unconstitutional, reports Al-Tahrir.

In regard to the impasse over the members of the country’s constitution-writing assembly, Ayman Nour, head of Ghad al-Thawra Party, said in a press conference Monday that a number of representatives from several parties withdrew from the meeting that took place on Monday.

Representatives from the Freedom Party, the Egyptian Arab Union, the Egyptian Citizen, Tagammu, Justice Party and Democratic Peace Party  did not attend the meeting, which was supposed to help members reach an agreement on who the members of the Constituent Assembly should be, reports privately owned Youm7 daily.

Al-Wafd, published by the liberal Wafd Party, runs a front-page story that says negotiations are now underway between the Petroleum Ministry and the East Mediterranean Gas Company for the resumption of gas exports to Israel. An official source told Al-Wafd that EMG offered to pay its overdue debts within a period of 10 years in return for re-pumping gas to Israel via the Arish pipeline.

However, head of the Egyptian Natural Gas Holding Company Mohamed Shoeib denied any negotiations, adding that the contract was permanently annulled and any developments have to be referred to the court.

Mahmoud Ouf, Egypt’s ambassador in Riyadh, denied media reports that Gizawy was sentenced to one year in prison and 20 lashes in absentia, adding that Gizawy was arrested in the Jeddah airport carrying 21,000 narcotic pills hidden in children’s milk bottles.