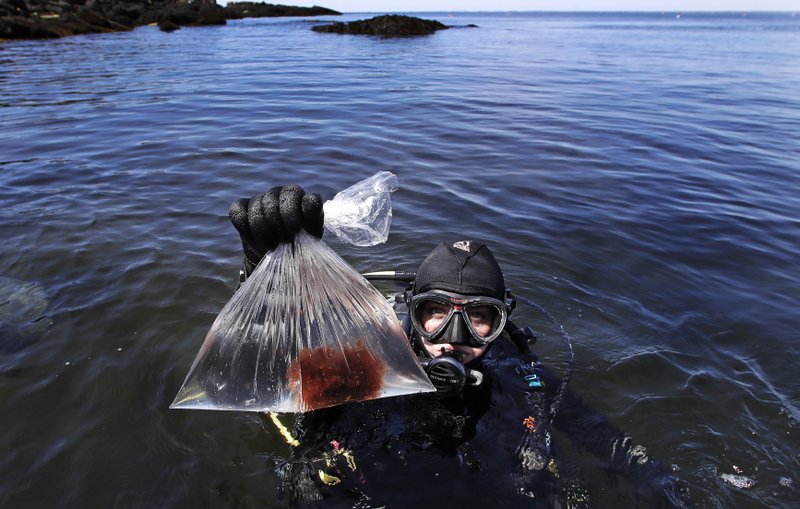 When diving in the Gulf of Maine a few years back, Jennifer Dijkstra expected to be swimming through a flowing kelp forest that had long served as a nursery and food for juvenile fish and lobster.

But Dijkstra, a University of New Hampshire marine biologist, saw only a patchy seafloor before her. The sugar kelp had declined dramatically and been replaced by invasive, shrub-like seaweed that looked like a giant shag rug.

“I remember going to some dive sites and honestly being shocked at how few kelp blades we saw,” she said.

The Gulf of Maine, stretching from Cape Cod to Nova Scotia, is the latest in a growing list of global hotspots losing their kelp, including hundreds of miles in the Mediterranean Sea, off southern Japan and Australia, and parts of the California coast.

Among the world’s most diverse marine ecosystems, kelp forests are found on all continental coastlines except for Antarctica and provide critical food and shelter to myriad fish and other creatures. Kelp also is critical to coastal economies, providing billions of dollars in tourism and fishing.

The likely culprit for the loss of kelp, according to several scientific studies, is warming oceans from climate change, coupled with the arrival of invasive species. In Maine, the invaders are other seaweeds. In Australia, the Mediterranean and Japan, tropical fish are feasting on the kelp.

Most kelp are replaced by small, tightly packed, bushy seaweeds that collect sediment and prevent kelp from growing back, said the University of Western Australia’s Thomas Wernberg.

“Collectively these changes are part of a recent and increasing global trend of flattening of the world’s kelp forests,” said Wernberg, co-author of a 2016 study in the Proceedings of the National Academy of Sciences, which found that 38 percent of kelp forest declined over the past 50 years in regions that had data.

Kelp losses on Australia’s Great Southern Reef threaten tourism and fishing industries worth $10 billion. Die-offs contributed to a 60 percent drop in species richness in the Mediterranean and were blamed for the collapse of the abalone fishery in Japan.

“You are losing habitat. You are losing food. You are losing shoreline protection,” said University of Massachusetts Boston’s Jarrett Byrnes, who leads a working group on kelp and climate change. “They provide real value to humans.”

The Pacific Coast from northern California to the Oregon border is one place that suffered dramatic kelp loss, according to Cynthia Catton, a research associate at the Bodega Marine Laboratory at the University of California, Davis. Since 2014, aerial surveys have shown that bull kelp declined by over 90 percent, something Catton blamed on a marine heat wave along with a rapid increase in kelp-eating sea urchins.

Without the kelp to eat, Northern California’s abalone fishery has been harmed.

“It’s pretty devastating to the ecosystem as a whole,” Catton said. “It’s like a redwood forest that has been completely clear-cut. If you lose the trees, you don’t have a forest.”

Kelp is incredibly resilient and has been known to bounce back from storms and heat waves.

But in Maine, it has struggled to recover following an explosion of voracious sea urchins in the 1980s that wiped out many kelp beds. Now, it must survive in waters that are warming faster than the vast majority of the world’s oceans — most likely forcing kelp to migrate northward or into deeper waters.

“What the future holds is more complicated,” Byrnes said. “If the Gulf of Maine warms sufficiently, we know kelp will have a hard time holding on.”

Their study, published by the Journal of Ecology in April, examined photos of seaweed populations and dive logs going back 30 years in the Gulf of Maine. They found introduced species from as far away as Asia, such as the filamentous red seaweed, had increased by as much 90 percent and were covering 50 to 90 percent of the gulf’s seafloor.

They are seeing far fewer ocean pout, wolf eel and pollock that once were commonplace in these kelp beds. But they also are finding that the half-dozen invasive seaweeds replacing kelp are harboring up to three times more tiny shrimp, snails and other invertebrates.

“We’re not really sure how this new seascape will affect higher species in the food web, especially commercially important ones like fish, crabs and lobster,” said Dijkstra, following a dive in which bags of invasive seaweed were collected and the invertebrates painstakingly counted. “What we do think is that fish are using these seascapes differently.”