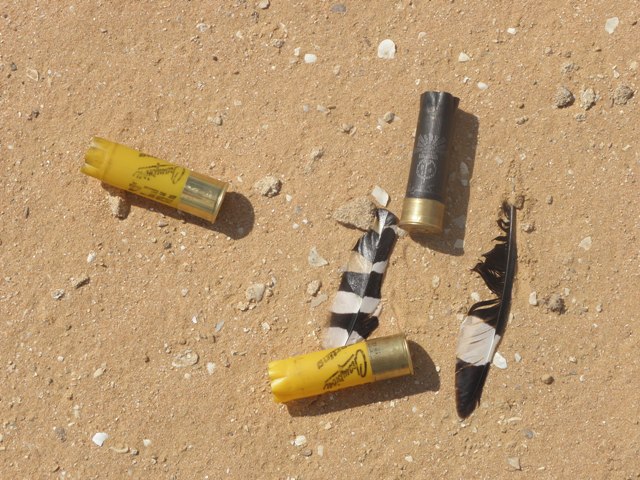 With fall hunting season in full swing, another year of unregulated bird hunting is plaguing the North Coast.

As birds migrate south from Europe for the winter, hunters have set up nets along the coast that run almost continuously from Arish to Salloum. The only gaps are where new compound developments have been built over the past decade.

Hunting season runs from the end of August to early October, and the people hunting migratory birds range from kids with guns who shoot birds for fun and food, to those who strategically place nets in military wetlands to collect large numbers of birds to sell for profit.

Regardless of who is doing the hunting, bird hunting in Egypt is indiscriminate and completely unregulated, resulting in declining bird populations and disturbed migratory patterns.

“Local hunters will tell you the numbers fluctuate from year to year, but since I started my work 25 years ago, the numbers and varieties of birds have significantly decreased over time,” says Mindy Baha el Din, bird specialist and co-founder of the organization Nature Conservation Egypt.

Bird Life International, an organization that mediates between different bird conservation groups around the world, estimates that about 500 million birds are killed each year as they migrate through the Mediterranean, a significant number of which are believed to be killed in the Middle East and North Africa region.

“There used to be a hint of self-imposed regulation, such as Bedouins taking their nets down in the afternoon or coastal nets being set up only in Sinai. But now it’s just completely open for hunters to catch anything and everything in sight,” Baha el Din says.

Various conventions have been signed to control gun usage and protect migratory birds, and over the years, the country has set up various laws to protect the environment and enforce these conventions, such as the Environment Ministry-issued Law 4/1994, which was amended as Law 9/2009. However, no real enforcement bodies were ever put in place to ensure follow-through.

Because the majority of land along the North Coast and Sinai officially belong to the military, the fact that net licenses are taken from the General Intelligence Services and that enforcement of such laws is the Interior Ministry’s responsibility makes the issue far more complex.

Environment Ministry bird specialist Wed Abdel Latif explains that it is extremely difficult to formulate and enforce laws over a population as diverse as Egypt’s.

“You have wealthy hunters out hunting for sport, and for these people it is easy to apply the laws,” he says. “But when dealing with the Bedouins, who have relied on hunting as a tradition for both survival and recreation for decades and centuries, it is not so easy without the resources to provide alternatives. [Overhunting birds] is another symptom of Egypt’s huge demographic divisions,” Abdel Latif says.

Abdel Latif adds that since hunting takes place over hundreds and hundreds of square kilometers of land, any attempt to enforce law in a country with suffering resources like Egypt is a lost cause.

“There just isn’t the personnel or awareness or funding to do anything about it,” he says.

But while environmentalists and governing bodies continue to try and establish ways to regulate migratory hunting, the problem is getting out of hand. Baha el Din fears the country might soon come under international scrutiny.

A visit to the North Coast during the fall hunting season reveals what looks like a hunter’s playground. Trees are covered with massive nets with birds on sticks placed inside to attract the birds, which are then shot or caught and de-feathered so they cannot fly.

The coasts are also covered with trammel nets, which are double-layered and efficiently capture birds that fly into them after their nonstop flights across the Mediterranean.

One front net is very fine and small, and the other is large and porous so that when a bird flies into it, a small trapping pocket is created. Birds caught in this manner look extremely distressed and in much pain.

When the birds are caught, they are bagged and carried around in large quantities, and their wings are clipped. Shot birds are left to suffer, and netted birds remain tangled and strangled for long periods of time.

The primary type of bird hunted during this season is quail, which is sold to restaurant merchants. These birds tend to migrate overnight, and from about 3 am to 10 am on the North Coast, birds can be seen constantly getting tangled in nets, with gunshots firing apace.

But the hunting is indiscriminate. Doves, hoopoes and orioles are among other types of birds that are commonly hunted, as well as far more valuable birds such as falcons and hawks.

Hunters say a quail will sell for about LE20 and a dove for about LE70, but a large, living falcon could sell for about LE150,000 — a fortune for most Egyptians, meaning that many hunters dedicate the entire fall hunting season to catching one falcon.

“If you were to go out further away from the coast now, you’ll probably find 500 cars cruising around, trying to catch a single falcon,” one hunter says.

Falconry — the practice of using a trained bird to hunt other birds — is common in the Gulf, whose residents are usually the buyers of falcons.

Unregulated hunting also means that these practices sometimes fall into the country’s protected areas, where more exotic birds can be found. But though rangers can take down the nets in these areas, they are unable to do much about the hunting that takes place outside them.

Strategic hunters who hunt for their livelihood appear to want to avoid contact with investigators.

“They don’t like [environmentalists], who they see as simply trying to shut down their tradition, which they see as a God-given right,” says a North Coast-based bird expert who wished to remain anonymous, citing legal concerns.

But younger people who hunt for food and recreation were more open to speaking about the subject and answering the question of why there is little enforcement.

“Here there is no government. Here there are Bedouins, guns and drugs,” one hunter says, laughing while wielding his gun. The delivery of his words expresses the disconnect between environmentalists’ goals and the Bedouins’ hunting traditions.

“It is this disconnect between the English-speaking conservation goals of NGOs, the ministry and its laws, and the relationship Bedouins have maintained with their environment since the beginning of time. That is the real challenge to be faced in regulating bird hunting,” the anonymous expert says. “Most Bedouins see this surge in bird hunting and tactics as their equivalent to a capitalist boom, in the same way that BP will continue mining oil despite severe spills.”

To counter this, organizations such as Nature Conservation Egypt and ministries have been trying to work together to formulate ways to provide alternatives to hunters.

Some alternatives involve financial incentives, stricter penalties on hunters hunting out of season, and incentives for hunting only game birds, rather than indiscriminately.

However, Baha el Din says she thinks one of the most efficient ways to regulate bird hunting would be to work with hunters directly, creating awareness about the aforementioned alternatives and explaining how bird conservation could reinvigorate an entire new industry for Egyptians, through bird tourism and overhunting law enforcement.

“We need to develop a system immediately that is multifaceted but also ensures that Bedouins are able to maintain their tradition in a sustainable way,” she says.

She insists that conservation authorities must focus their attention on establishing a unique systematic way to tackle overhunting.

“If we act now, we may be able to see results in 10 to 15 years,” she says. “Otherwise, I am certain Egypt will soon come under international scrutiny, making the situation more complex and desperate, and bird conservation a lost cause.”