As World Food Day is marked on 16 October, concerns as to how to tackle national food insecurity continue to escalate.

UN figures show that for many, the era of affordable food may be over as food prices continue to skyrocket across the world. Last month prices were at their highest since the UN's Food and Agriculture Organization (FAO) began indexing them in 1990.

World Food Day is marked to ensure attention is focused on these issues.

A report released a few days ago revealed that 75 percent of countries on the African continent, as well as many Arab states, face an impending food crisis.

Maplecroft’s Food Security Risk Index found that of 197 countries surveyed worldwide, up to 39 of the 59 most at risk of food insecurity were African countries.

Although Egypt managed to remain relatively distant from high risk countries, ranking 71 out of the 197, this is not to say Egypt should be unconcerned about food security. According to Maplecroft, low crop yields have pushed global food prices up by six percent in July 2012, raising concerns for a country like Egypt which spends more than US$5.5 billion a year on food subsidies, which also cover basic commodities such as rice, oil and sugar.

“In Egypt the situation is now very critical — the gap between population growth and agricultural production is growing every day,” Mufti says.  “Although historically Egypt was the food basket of many parts of the world, due to its good climate, fertile soil, and abundance of Nile water and labor, now agricultural production fails to even meet local demand.”

The theme of World Food Day this year is the celebration local agricultural initiatives and cooperatives around the world. In a press release issued through the UN in Cairo, Minister of Agriculture Salah Mohamed Abdel Momen emphasized the importance of small initiatives in helping sustain Egyptian agriculture, particularly in a context of political turbulence and instability.

Mufti echoed this sentiment. praising recent efforts on the part of local initiatives to restore Egypt`s place on the world agriculture map. “We are currently witnessing some very active initiatives using new alternative and innovative solutions to address the issue, but we still suffer a lack of national vision that puts Egypt on the right track to solve the food crisis properly,” he explains.

Mufti also points to access to proper inputs, such as seeds, as one of the biggest threats facing Egyptian agriculture, and suggests that local initiatives have an important role to play in fighting to maintain the quality and availability of these inputs.

One example of such an initiative is a medium-size pilot project in the small village of Wardan in Giza governorate, about 70 kilometers west from Cairo. Run predominantly by female farmers, it aims to preserve good quality seeds that are disappearing from Egypt’s local seed banks and markets.

Abdel Mawla Ismail, the project’s coordinator, told Egypt independent that seeds in Egypt, as in many parts of the world, have largely become monopolized by multinational corporations that produce poor quality seeds. As a result, he says, Egypt’s high quality and varied crops are being replaced by poor quality crops and uniform crop varieties.

The initiative seeks to act as an organic seed bank that preserves good quality Egyptian seeds and reuses them. “We take seeds of crops that Egypt is long famous for, such as corn or onions, and use their original home-grown seeds, not those provided and manufactured by companies.”

Ismail also said that they are arranging with local retailers to sell crops such as corn, onion, and cucumber as pilot products of this project, which will soon be available nationally through various outlets.

In contrast to Europe, where  anti-GM activist groups successfully lobbied against GM crops on the basis that they were unsafe for human consumption, in Egypt the introduction of GM was met with little resistance.

Egypt’s regulations ban the import of seeds without a pre-approval license from the Ministry of Agriculture, as well as approval from the Central Administration for Seed Registration for import and cultivation. Notwithstanding these regulations, however, Mufti explains that there are no real protective measures to give quality, domestic seeds a competitive edge over those that are imported.

Another initiative aiming to protect and preserve quality local seeds can be found on a small street in the upscale neighborhood of Heliopolis, in a garden that was transformed from a municipal garbage dump.

Several years ago, Gamal al-Nahary, a 74-year-old retired journalist, decided to dedicate his time and effort to create this garden with the aim of preserving seed and plant biodiversity.

Nahary says that his approach to seed and flora preservation is indiscriminate. “I don’t necessarily focus on preserving only seeds that produce food, but all seeds. Beautiful plants are now disappearing, and I believe they too are a part of the Egyptian agriculture sector, they add to its diversity,” he explains.

The initiative was inspired by Mahathir Mohamad, Malaysia’s Prime Minister who launched a project a few years ago to plant thousands of acres with palm oil seeds. Malaysia has since become one of the world’s leading palm oil producers.

“It is easy to do so given the right attention,” says Nahary. “All we need is political determination and active citizenship to focus on our national crops and seeds, and stop encouraging dependence on imported ones. We should also adopt productive crops and biodiversity throughout the country, not only in farms.”

From its early history, Egypt has been a predominantly agricultural country; even until the mid to late twentieth century, Egypt was renowned for being a multi-cropping powerhouse.

Local initiatives and agriculturalists, as well as Egypt’s agricultural communities, still see the country in this way, hence their optimism.

Sisi lays out measures to confront repercussions of economic crisis 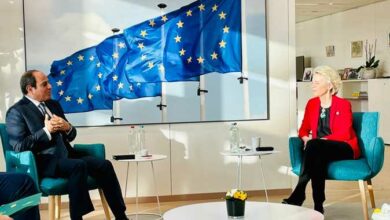