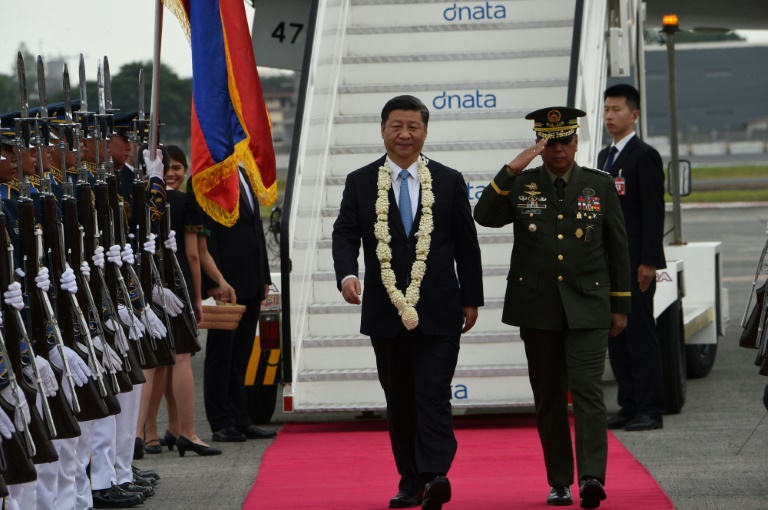 Chinese President Xi Jinping arrived in the Philippines Tuesday for a key state visit to a long-time US ally, aiming to boost blossoming ties with potentially billions in backing for mega- projects.

Philippine President Rodrigo Duterte has proven a willing recipient of Beijing’s attentions, declaring shortly after his election in 2016 his nation’s “separation” from former colonial master the US.

Since then Beijing has promised billions of dollars in investment and loans for major infrastructure that the developing nation of 105 million deeply needs, but over two years later nearly none of it has arrived.

Xi landed in Manila to a red-carpet welcome at the airport for the first visit from a Chinese president in 13 years, which Manila hopes will finally net those investment deals.

China has dispersed tens of billions of dollars in loans since 2013 as it expands its political influence globally, countering the American hegemony that characterized the post-World War II order, especially in Asia.

However, even before Xi’s expected arrival, hundreds of protestors descended on the Chinese embassy to voice opposition to closer ties with Beijing.

“Philippines is not for sale,” the marchers chanted, as some brandished signs saying “China out of Philippine waters” in reference to a long-running dispute over the South China Sea.

Duterte has enthusiastically embraced Xi, even setting aside a key 2016 ruling from an international tribunal that declared as without basis Beijing’s expansive claim over the waterway.

At the same time, the mercurial leader has declared an end to what he characterized as the Philippines’ submissive relationship with the US, even calling then-US president Barack Obama a “son of a whore”.

But relations have been warmer since Donald Trump became president and dropped American criticism of Duterte’s anti-drug crackdown that has killed thousands.

The dispute over the resource-rich South China Sea, a key transit route for billions in trade, led to a freeze in Manila-Beijing relations, which thawed with Duterte’s pivot.

Duterte taken for a ride?

China subsequently pledged $24 billion in loans and investments, but just a tiny portion has come through, prompting critics to say Duterte was tricked.

Meanwhile, others have warned of a “debt trap” citing China’s lending record with the rest of the developing world.

Filipino analyst Richard Heydarian said China’s pledges induced Manila to “soft-pedal” on the South China Sea issue, but Beijing failed to hold up its end of the bargain.

“We know there was a geopolitical calculation,” he told AFP. “What is the incentive to rush if Duterte has been giving them whatever they want?”

Filipino Budget Secretary Benjamin Diokno conceded last week the delays were partly due to China’s unfamiliarity with the Philippine bidding process on big infrastructure projects, but didn’t hide his wish for things to accelerate.

“The visit of the head of state of China will put pressure on the team (in Beijing),” Diokno added.

“The foreign investment has come, the infrastructure loans have not,” he added.

Chinese investments in the Philippines surged more than five-fold in the first six months of the year after a 67 percent expansion last year, Foreign Minister Wang Yi said during a Manila visit last month.

Two-way trade also topped 10 percent over both periods, he added.

While there was support in government for the latter, “that doesn’t mean that every bureaucrat, local politician, and the general public enthusiastically jumps on board”, Wyatt said.