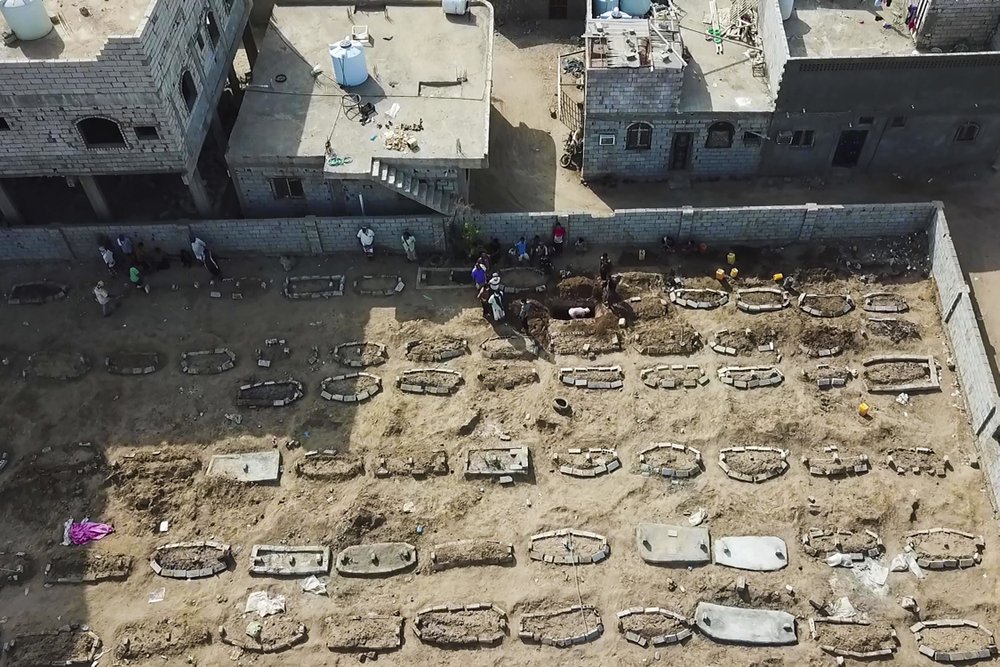 ADEN, Yemen (AP) — At a cemetery in Yemen’s largest southern city, dozens of fresh graves were a testament to a spike in deaths amid the coronavirus pandemic.

The cemetery workers who bury them don’t know what killed the newly deceased. But there’s no denying that there’s been an increasing number of people getting sick in the port city of Aden — likely from the coronavirus.

Many are buried with few precautions and only a small number of attendees. Workers wear masks or cover their faces with a cloth.

Mohammed Ebeid, a gravedigger in Aden, said there’s been five times the normal traffic, with 51 burials in the last week at the cemetery where he works.

“This is something strange, we’ve never seen it before,” he told The Associated Press late last week.

The international aid group Doctors Without Borders has reported a spike in deaths and infections from coronavirus, including health workers at a facility it runs in the city. Residents of Aden had previously said several hospitals shut their doors, as health care workers feared contracting the virus while lacking protective equipment.

The spike has also exposed the extent of the virus’s spread in the war-torn country.

Caroline Seguin, Doctors Without Borders’ operations manager for Yemen, told the AP on Friday that the mortality rate at their facility treating COVID-19 patients was “very, very high,” and that a lot of people have arrived “almost dead, or already dead.”

The group, which is known by its French acronym MSF, said in a statement last week that the high number of deaths at its COVID-19 treatment center in Aden “speaks to a wider catastrophe unfolding in the city.” The key southern port has recently witnessed a new chapter of political infighting between and government forces and southern separatists who declared self-rule last month, leaving health authorizes in disarray.

The facility had no choice but to turn away patients, said Seguin, because they did not have enough staff and supplies to treat the patients. MSF’s facility is the only dedicated COVID-19 center for all of southern Yemen.

Seguin said at least 40 health workers at the facility were COVID-19 patients or suspected patients, but MSF couldn’t confirm because of a shortage of tests.

The group said Thursday that “as many as 80 people have been dying in the city per day during the past week, up from a pre-outbreak normal of 10.”

Earlier this month, the United Nations said it was extremely concerned by the rapid spread of the virus in Yemen. It said community transmission was going widely undetected, and unmitigated in many places, due to the lack of testing.

The Health Ministry of Yemen’s internationally recognized government, which controls Aden, has reported only 212 confirmed cases including 39 deaths in the southern Yemen, which is low. In the north, which is controlled by the Huthi rebels, the numbers are even lower, but there are reports of unexplained deaths there as well. So far, the Huthis have reported four cases, including one death of a Somali migrant.

The Iran-backed Huthis captured much of northern Yemen in 2014, including the capital, Sanaa, forcing the government to flee to the south. The following year, a Saudi-led coalition went to war against the rebels.

Image: In this May 21, 2020, photo, grave diggers bury bodies at Radwan Cemetery in Aden, Yemen. At the cemetery in Yemen’s largest southern city, dozens of fresh graves are a testament to a spike in deaths amid the coronavirus pandemic. The cemetery workers who bury them don’t know what killed the newly deceased. But there’s no denying that there’s been an increasing number of people getting sick in the port city of Aden — likely from the coronavirus. (AP Photo)