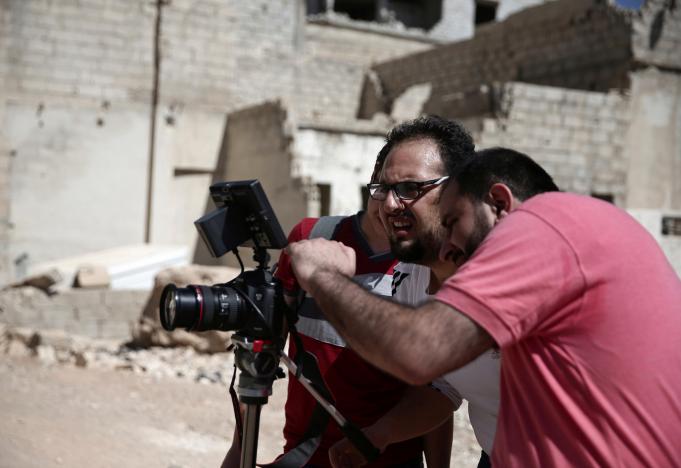 A Syrian filmmaker whose harrowing footage of sarin gas victims in 2013 was seen around the world is using his experience of the attack and conflict to make a drama looking at why people take up arms in a war which began as a peaceful revolution.
Humam Husari's self-financed short film explores the chemical attack near Damascus through the eyes of a rebel fighter who lost his wife and child but was denied time to bury them. Instead, he is called to defend his town from a government offensive. The story is based on real-life events, he said.
"We need to understand how people were pushed into this war and to be part of it," said Husari, 30. "I am talking about a story that I lived with. They are real characters."
U.N. investigators established that sarin gas was used in parts of the rebel-held Ghouta suburbs of the Syrian capital Damascus in 2013. The United States accused Syria's government of conducting the attack, which it estimated killed around 1,400 people, but Damascus denied responsibility and blamed rebels.
Making the film was an emotional but necessary experience for Husari and his performers, who were witnesses to and victims of the attack, and not trained actors.
"The most difficult thing was the casting and auditions," said Husari, who took about two months to write, produce and direct the 15-minute film and is currently editing it.
"A 70-year-old man said to me: I want to be part of this movie because I lost 13 of my family … I want the world to know what we've been through. And all I wanted from him is just to be a dead body," he said.
"I was amazed with how much those people were able to express their tragedy and to cooperate with me on this movie."
Syria's civil war has killed hundreds of thousands of people and displaced 11 million — about half of Syria's pre-conflict population. It has caused a refugee crisis in the Middle East and Europe and drawn in regional and global powers.
Mohamed Demashki, a business student and professional bodybuilder before the war who plays the main character, said he took part in the film because of its message.
"It tries to convey to the world that the people who live here are not just fighters, they are not terrorists. They are people with a life. The war conditions them to become fighters," he said.
When the sarin attack happened, Husari took his camera to the makeshift hospitals that sprang up to cope with thousands of victims and sent the footage to international media.
"I wasn't filming because I am a cameraman, I was filming because this is the only thing I could do for the victims," he said.
"During it, you can't feel anything, you just feel shock … After, when you just think about what you have witnessed, you rethink how big and real and really tragic this was. It is not easy for me to watch my footage."
U.S. President Barack Obama had said use of chemical weapons would be a red line, but after the 2013 attack, it became clear Washington would not back up his words with military action.
While Syria destroyed its declared stockpile of chemical weapons under international supervision, warring parties continue to accuse each other of attacks involving mustard gas, chlorine and other chemicals.
Husari, who studied film at the Brighton Film School in Britain, now makes a living covering the Syrian conflict for international news organizations, but still hopes to make filmmaking his career.
Speaking to Reuters by phone over a background wail of air raid sirens and the roar of warplanes, Husari said that living the daily reality of war will equip him to tell the story of the conflict when the war ends and films can start to be made.
"Let's just think about how I reacted to those war jets in the sky. It has become something very normal to me, and this is something it is really hard to understand from the outside," he said.
He has acquired the tools to direct actors to accurately respond to events in a conflict setting, he said.
"I feel I have a responsibility in the future to tell this story, these stories, through cinema and drama. That's usually what happens after every war," he said.
With parts of Damascus's Ghouta under opposition control from the beginning of the conflict, a number of areas have come under siege by Syrian government and allied forces.
Making cinema in a place where there is no free passage of food, people and other supplies is tough. Husari made his lighting equipment and camera track himself, but had the good fortune to have access to a good quality camera.
"It is an irony that in a besieged area you can find the best cameras you need," he said.