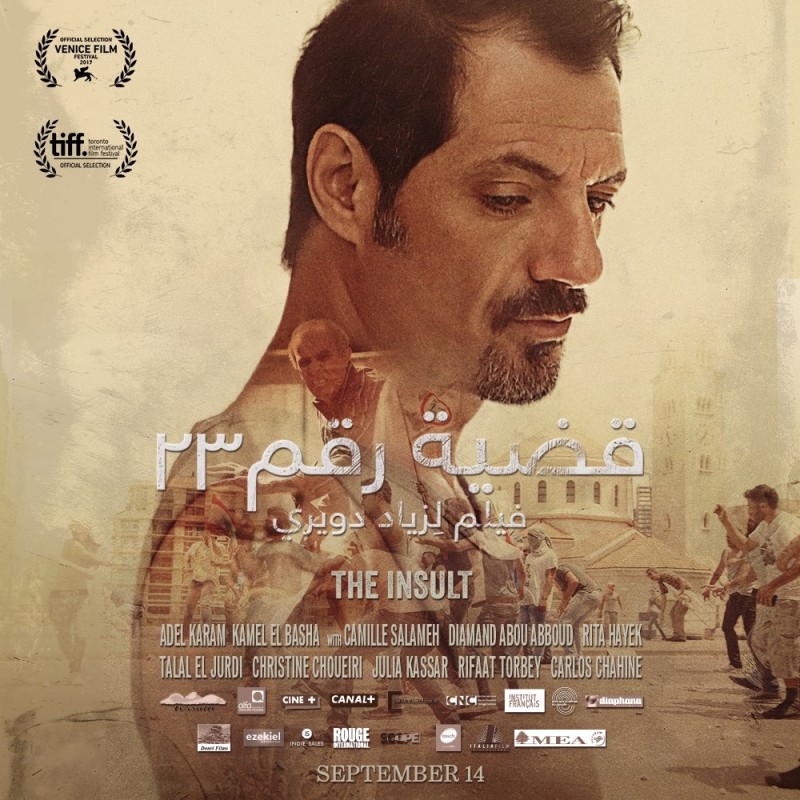 Zawya Cinema will be screening Ziead Al-Doweiry’s “The Insult” despite protests against the movie being played in Egypt, in addition to the banning of the movie in Lebanon and Palestine, as director Ziad Doueiri faces accusations of normalizing relations with Israel.

The Campaign to Boycott Israel expressed their disdain over the screening of the movie in the downtown Zawya theatre in a press release saying, “We were surprised to find that cinema ‘Zawya’ will be showing the movie and has advertised it.”

It continued, “Despite us [contacting them] to explain our situation and encourage them not to play the movie, we have not received any reply.”

The press release continued to cite reasons to urge people to boycott the movie, saying, “The director is normalizing relations and has hired Israeli actors and crew” in the movie, in addition to accessing Israel to film scenes over the course of 11 months.

The press release went on to attack the message of the movie: “’The Insult’ is insulting to Palestinians and it fails to differentiate between the perpetrator and the victim.”

Finally, the campaign concluded its press release by demanding that Zawya stops screening the movie, calling upon “all those who believe in boycotting the Israeli occupiers” to stand firm against any attempts for artistic or cultural normalization.

Despite such backlash, Zawya held its grounds. The cinema issued a press release two days later, saying that “Zaywa not signing the campaign’s initiation letter does not mean that we do not support the campaign’s principles, or the history which has preceded it in regards to normalization with Israel.”

Zawya’s response went on to say it will be cooperating with the campaign, “we have not ignored the campaign’s attempts to contact us. We tried to contact them before issuing our press release, but we failed. We have contacted Ramy Shaath, the campaign’s director and invited him to give a speech explaining the campaign’s feeling about the film before we play it.”

“We will also be organizing a discussion that includes the campaign and those in favor of boycotting the movie throughout the next days. A free screening will follow this for all those who wish to see the film without paying the money to support it.

However, backlash against the movie has spread.

Film director Amal Ramsis, who is the founder of the Women’s Cinema Festival, accused director Ziad Doueiri of being, “a normalizer,” in addition to being “racist against the Palestinian people.”

In spite of this, Ramsis defended Zawya as an institution, encouraging people to boycott the movie but not Zawya itself.

Elsewhere, a member of the ‘Tayar El Karama’ (The Way to Dignity) political party, Sami al-Nahri, also voiced his strong concerns about the film.

Nahri said that “if the movie was shown everywhere in the world, it shouldn’t be played in a country where the Zionist enemy has killed tens of thousands of its citizens throughout the existence of the cancer they created called Israel.”

“Egypt should continue to refuse normalization and normalizers. God bless the great Saad El-Din Wahba, who never allowed the Zionists to ever take part during his time running the festival.”

Zawya replied to critics saying it “respects all calls to boycott the movie,” and said that it leaves the decision to the audience.

Directed by esteemed Lebanese director Doueiri, ‘The Insult’ plays on the sectarian system in Lebanese politics, which followed the country’s civil war. It revolves around a trial, which takes place following a clash between a Palestinian refugee and a Lebanese Christian, attracting nationwide attention.

‘The Insult’ became the first Lebanese film in history to be shortlisted as a nominee for the prestigious international film awards, the Oscars, for the category of Best Foreign Language Film.

The nomination is considered a major achievement for Arab Cinema, also being the first Arab film to be nominated for the award.