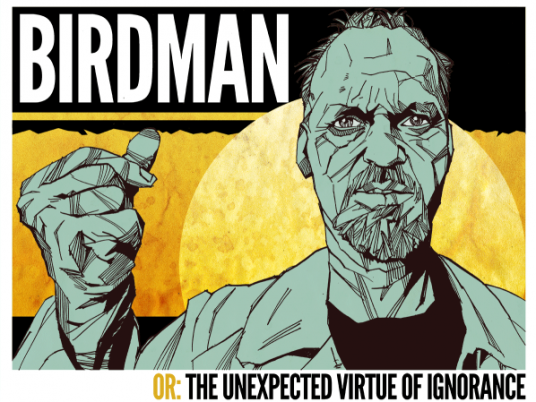 Whether they were awarded by cinema-goers or the industry, seen by the most people, or simply highly original, a few movies were talked about a lot this year and will be remembered. Here's our list of them.

On February 22, Alejandro Gonzales Inarritu's movie triumphed at the Oscars, scooping four statuettes out of nine nominations, including Best Picture and Best Director. However, there was no Best Actor Oscar for Michael Keaton, even though he was praised by the press for his role as a faded actor hoping to return to former glory on Broadway.

The second animation movie to be screened at the Cannes film festival after "Up" in 2009, "Inside Out" was one of the big successes of the year as it charmed both children and adults. This 15th Pixar movie was further proof of the studio's originality, as it portrayed emotions (Joy, Sadness, Fear, Anger and Disgust) as characters in young Riley's brain, their HQ. The film is in the running for the 2016 Oscar for the Best Animated Feature Film.

Screened at Cannes as one of the festival's official selection, this movie vaguely inspired by Montesquieu's "Persian Letters" won its director Jacques Audiard his first Palme d'Or.

This story of a former Tamil Tiger soldier who flees the civil war in Sri Lanka and settles in France moved the audiences in Cannes, and is likely to be in the running for a 2016 César Award in February. It is set for release in more countries, including the UK in 2016.

Beats of No Nation

Having made its mark in TV series, Netflix is now looking to the big screen. On October 16, the American streaming service unveiled its first original movie, "Beats of No Nation", which tells the story of child soldiers in Africa.

At the end of the month, this opus, starring Idris Elba, had already been seen by three million Netflix subscribers. Having won a Marcello Mastroianni Award and been nominated for five Independent Spirit Awards, this Cary Fukunaga-directed movie could become the first Oscar-nominated Netflix production.

Back to the Future

This Robert Zemeckis story was the subject of much discussion in 2015, particularly on October 21, the exact date Doc Brown programed into his DeLorean Time Machine in "Back to the Future II," which was released in 1989. This did not escape the attention of various brands, nor the media which compared the future imagined by the director with present-day reality.

A new James Bond film is always an event and the release of the 24th was no exception. Daniel Craig's fourth adventure as the British secret agent had a massive global launch. Released in the UK October 26 and the US November 6, the movie has generated almost US$680 million at the box office.

In June, this fourth instalment of the saga launched by Steven Spielberg in 1993 set new global box-office records. It's the first film to have generated US$500 million in one weekend, and it's the fastest to get to one billion dollars in revenue, in only 13 days.

This blockbuster starring Chris Pratt ended the race to be the highest-grossing film of all time on the third step of the podium, just after "Titanic".

It's not been released yet, but it's undoubtedly the most-written about movie of the year. Trailers, posters, photos, magazine covers, interviews, a slew of merchandise … the new "Star Wars", the first in a third trilogy, and the first made by Disney, is everywhere.

Fans are waiting impatiently to see this encounter between the old and new generations as imagined by J.J. Abrams. The film has already generated US$50 million in the US from advance ticket sales, most likely the first in a long line of records.

Tags 2015’s most memorable movies Birdman Dheepan Inside Out Spectre