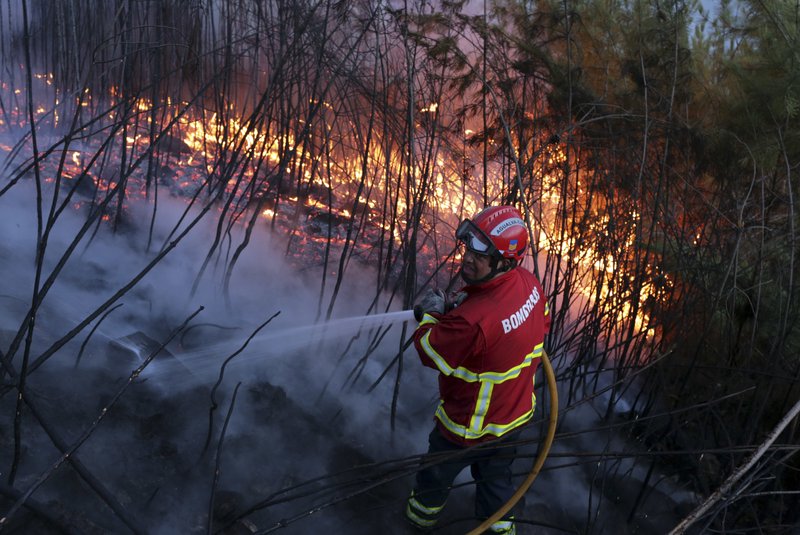 Around 3,000 firefighters in Portugal were struggling to put out more than 150 wildfires raging across the country Tuesday, as persistent hot and dry weather stoked the flames, officials said.

In one case, around 800 firefighters supported by air units were concentrating on extinguishing a large blaze near the central town of Vila dei Rei.

Portuguese public television RTP showed images of towering flames illuminating the night which by morning had left large swathes of scorched forest near the town, where authorities evacuated 112 people Monday.

Another 300 firefighters were focused on controlling a second large fire also in the interior of the country.

RTP showed images of smoke rising as fires advanced through wooded hills, threatening the villages of Ferreira do Zezere and Macedo de Cavaleiros.

Civil Protection Agency spokeswoman Patricia Gaspar said Tuesday that 55 people had been injured, including four with serious injuries, by fires in Portugal since Aug. 9.

Gaspar also said that firefighters would get no relief from the weather. She said temperatures were forecast to rise in the interior of the country, where they could reach 40 C (104 F).

Portugal has been especially hard hit by wildfires this year because of a widespread drought. The worst outbreak killed 64 people in June, with many dying on a road as they fled the rampant flames in their cars.

On Saturday, the Civil Protection Agency recorded a single day record for the year of 268 separate fires. The agency added that 90 percent of the fires were either intentionally or accidentally started by people.

Wildfires in Portugal this year have accounted for more than one-third of the burnt forest in the entire 28-nation European Union.