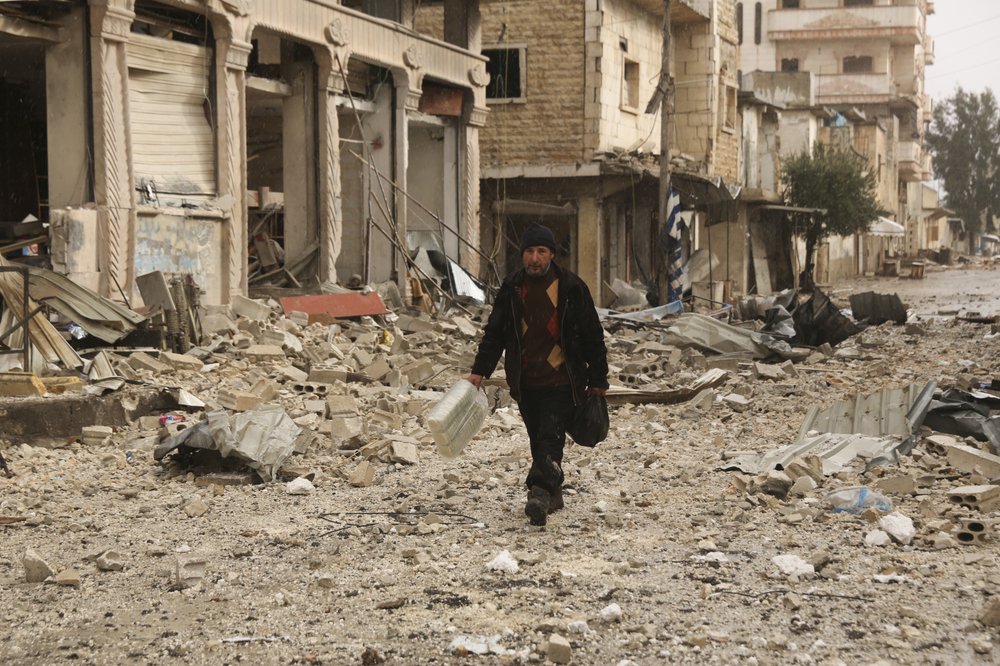 The attack came as a Russian delegation arrived in the Turkish capital of Ankara for a second round of talks to discuss the rising tensions in Idlib, the last rebel stronghold in neighboring Syria.

Eight Turkish military and civilian personnel and 13 Syrian soldiers were killed in an exchange of fire in Idlib last week.

The Syrian Observatory for Human Rights, an opposition monitoring group, reported that six Turkish soldiers were killed and seven were wounded when government forces shelled the Taftanaz air base in Idlib on Monday. It added that four Syrian rebels were also killed in the shelling.

An airstrike in a nearby rebel-held region, meanwhile, killed nine people including children, opposition activists said.

Syrian President Bashar Assad’s forces, backed by Russian air cover, have been advancing into the last rebel-held areas of Idlib and nearby Aleppo countryside, seizing dozens of towns and sparking a large-scale humanitarian crisis with some 600,000 people fleeing from their homes toward safer areas near the border with Turkey.

The fighting led to the collapse of a fragile cease-fire that was brokered by Turkey and Russia in 2018. The two countries back opposing sides in the Syrian war: Turkey supports the Syrian rebels, while Russia has heavily backed the Syrian government’s offensive.

Turkey sent hundreds of military vehicles and troops into Idlib province in the past week. The buildup and the continued government advances sparked a rare clash on Feb. 3 between Turkish and Syrian soldiers that killed eight Turkish military personnel and 13 Syrian troops. Turkey has warned Syria to retreat to the cease-fire lines that were agreed in 2018.

Turkish Foreign Minister Mevlut Cavusoglu said Turkish and Russian delegations exchanged proposals over the situation in Idlib during a first meeting in Ankara on Saturday. On Monday, the Russian team returned to Ankara from a visit to Jordan, for further discussions, he said.

“If a compromise had been reached there would have been no need for today’s meeting,” Cavusoglu told reporters. He said the Turkish and Russian leaders could step in if no compromise is reached.

Syria’s military has vowed to keep up its campaign.

The early morning airstrike on the village of Ibbin in Aleppo province killed nine people, including six children, according to the Britain-based Syrian Observatory for Human Rights and the Step news agency, an activist collective. At least 10 people were also wounded in the airstrike.

The Syrian government’s campaign appears to be aimed at securing a strategic highway in rebel-controlled territory for now, rather than seizing the entire province and its the densely populated capital, Idlib.

The government-controlled Syrian Central Military Media released a map of the area of fighting showing that Syrian troops only have 15 kilometers (9 miles) left from seizing full control of the strategic highway, know as M5. The highway links the national capital of Damascus with the country’s north, which has for years been divided between government and opposition forces.

The attack was the latest in a series of explosions in Turkish-controlled regions that have killed and wounded scores of people. Turkey has blamed the attacks on on the Syrian Kurdish militia, known as the People’s Protection Units.

The bomb went off on a main street in the town of Afrin, which Turkey took control of following a military incursion in 2018, Anadolu reported. It said some of the wounded were in serious condition, adding that the death toll was likely to rise.

Image: A man carries his belongings through a street destroyed in recent bombings by the Syrian government forces in the town of Sarmin, in Idblib province, Syria, Friday, Feb. 7, 2020 (AP Photo/Ghaith Alsayed)