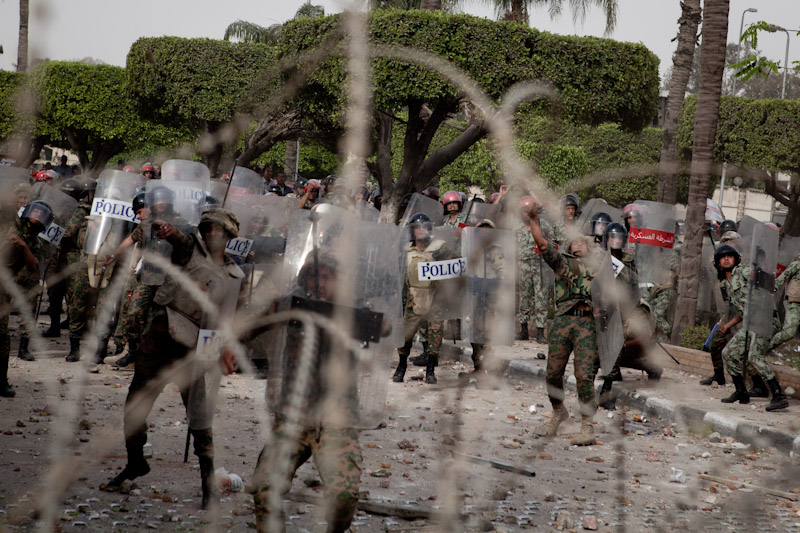 Hours after a bloody fight between military forces and protesters when the latter violently dispersed the weeklong sit-in next to the Defense Ministry last Friday, military police officers celebrated their victory by dancing to patriotic songs along with some civilians in the street.

The scene was shocking for the revolutionaries who felt the military considers them enemies, while some say it indicates the majority’s fatigue from excessive protests and their longing for stability.

With less than a month before the presidential election begins, both revolutionary forces and Islamists find themselves losing credibility with the mainstream. Instead, the Supreme Council of the Armed Forces, which has mismanaged the transition over the last 14 months, is poised to benefit from continued perceptions of chaos and instability, readying to carve out a long-term role for itself after the official transfer of power to civilians.

“The SCAF has definitely come out a winner from the Abbasseya clashes because they have made the revolutionary and Islamist forces appear as irresponsible and chaotic. They put the blame on Islamists to a great extent by portraying them as reckless, unmindful of the people’s interests and violent,” said Samer Suleiman, a political scientist at the American University in Cairo.

One person died and 296 people were injured in last Friday’s clashes between protesters and military forces outside the Defense Ministry. Fighting between protesters, mostly Salafis, and other civilians earlier in the week left 11 people dead.

In a development that many people saw as dangerous, protesters were reportedly seen with guns for the first time since the revolution began. One Abbasseya resident was killed in the crossfire as fighting trickled to the side streets throughout the week.

The clashes will improve the chances of presidential candidates who belong to the old regime such as former Prime Minister Ahmed Shafiq and former Foreign Minister Amr Moussa, since their campaign promises focus on restoring security and stability to the country, Suleiman told Egypt Independent.

Although the military crackdown dealt a blow to revolutionary forces through the random detentions of activists, the casualties were fewer than previous clampdowns during which tens were shot by the military and security forces.

“We [revolutionaries] definitely lost the public opinion after Friday and now the SCAF is appearing as the protector of the state and its institutions,” said Mohamed Effat, a video journalist and activist.

Effat was against the sit-in and its goals, even though he supported them after they were attacked out of solidarity and in defense of their right to peacefully protest.

“The escalation, marching to the Defense Ministry, its timing and goals were politically stupid. It’s meaningless to start a sit-in there calling for the fall of military rule three weeks before the presidential election because it will backfire,” he says.

Because the sit-in was initiated by supporters of disqualified Salafi presidential candidate Hazem Salah Abu Ismail, Islamists were largely blamed for the chaos by different media outlets. “They are tapping in on the Islamophobia inside everyone so people rush into the arms of the army begging them not to leave power,” said Effat.

Since the resignation of former President Hosni Mubarak following the 18-day uprising, Islamists have risen as the dominant force in Egypt’s political arena, manifested in their landslide victory in parliamentary elections as both the Muslim Brotherhood and ultra-conservative Salafis won about 70 percent of seats in Parliament.

Mohamed Seif al-Dawla, a political analyst, argued that the SCAF used the recent violence to smear its Islamist opponents.

“Even though the main Islamist political parties, the Freedom and Justice Party and the Salafi Nour Party, were not present at the sit-in, state media were exaggerating minor violations from the protesters who were majority Salafis in order to weaken the Islamist forces’ public support,” he said.

Seif al-Dawla believes that the SCAF is paving the way to maintain a strong influence on the government and its policies even after it officially hands over power to an elected civilian president in June. A sense of chaos in the country will help the generals to justify their continued role.

The military council was being increasingly criticized for its failure to manage the transition period. The revolution’s goals of dignity, social justice and freedom have gone unheeded as the country’s economy teeters on the edge of crisis — protests and strikes continue, about 200 protesters were killed by the military and security forces since February 2011 and crime persists throughout the country.

The frustration with the SCAF's management was reflected in the nationwide marches on the revolution’s anniversary, calling for the fall of military rule.

However, Ashraf al-Sherif, a political science professor at the American University in Cairo, believes that the rough transition period has been intentionally orchestrated by the SCAF, which doesn't want real change.

“The SCAF wants to maintain a political void. They neither have a political project nor the means to apply it, but at the same time they are against relaying real power to any other political force,” said Sherif.

Sherif argues that even though the SCAF can’t afford to cancel the presidential election, the transfer of power will only be superficial as the generals will make sure to limit the powers of an elected executive authority, just as they have the current Parliament.

“It seems that there are new institutions that ostensibly share power with the SCAF, such as Parliament, but in reality they have very limited space for maneuver. When the Brotherhood tried to cross these limits, they clashed [with the SCAF],” said Sherif.

The period of relative agreement between the SCAF and the Brotherhood came to an end after the Islamist group reneged on its previous promise not to field a presidential candidate. They had nominated Khairat al-Shater, the deputy supreme guide, who was later disqualified from running. The Brotherhood's political party then put forward its president, Mohamed Morsy, as a candidate.

The Brotherhood, which holds the largest number of parliamentary seats, hasn’t been able to win most of its political battles with the SCAF or the secular forces, including its demands to sack the cabinet and its attempt to dominate the Constituent Assembly charged with writing a new constitution.

According to Sherif , the SCAF has weakened the revolutionary forces such as the April 6 Youth Movement, the Ultras, the Revolutionary Socialists and, most recently, Abu Ismail's supporters.

General Hassan al-Roweiny, SCAF member, previously accused the April 6 Youth Movement, a major player in the 25 January revolution, of having foreign agendas and aiming to incite division between the people and the military. More than 70 Ultras, hardcore football fans who also played an important role in revolutionary actions, were killed in a soccer game by the supporters of an opposing team in an incident that many believed was planned by the security forces as payback.

At the same time, says Sherif, "The SCAF has been engineering its relations with the political forces through playing the Islamists against the secularists and vice versa, then playing the role of the mediator at times and at other times being an opponent.”

Still, political forces and revolutionary groups share some of the blame for their marginalization. Their political immaturity and lack of foresight has prevented them from securing real political gains or making inroads with the majority of the population who are not wholeheartedly committed to revolutionary goals.

Additionally, secularists have had no problem allying with the SCAF against the Islamists when it is convenient, and they were against the radicalizing of revolutionary forces in the street so that they won’t compete with them for public support, said Sherif.

The Islamists, meanwhile, don’t have clear political projects, according to Sherif. They can’t think strategically, and they have been misusing their parliamentary majority, which led to mistrust between them and secularists.

Revolutionary forces are now seeing the need to turn to politics, saying they will focus on the presidential election, which is three weeks away.