At least 14 people were killed on Tuesday after two roadside bombs exploded in a main bazaar in Bamiyan city in the central province of the same name, local officials said.

The dead included 12 civilians and two traffic policemen, according to the police chief of the province, Zabardast Safai. Another 45 people were injured, Safai said.

Bamiyan has been seen as the safest province in the war-torn country because of its remote location in the central mountains.

The Taliban has denied involvement in the bombings. The group has been waging an insurgency against the Kabul government since being ousted as the country’s rulers in a US-led invasion in late 2001.

The “Islamic State” (IS) affiliate in Afghanistan did not immediately claim responsibility. The militant group has targeted the area in the past over the province’s Shiite Hazara ethnic minority. Scene in Bamiyan following the explosion 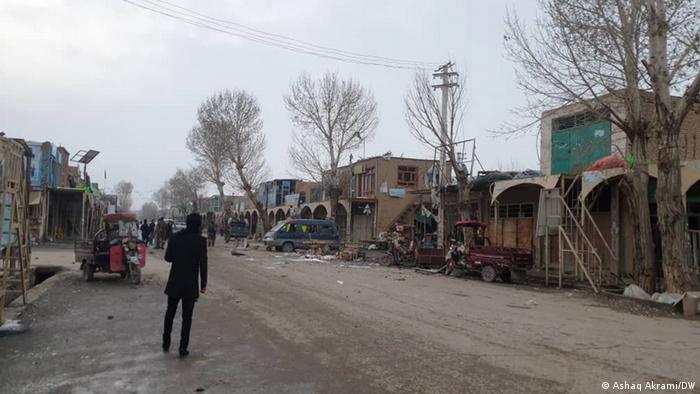 The bombings injured several people in a nearby restaurant and shop

The affiliate has claimed responsibility for several recent deadly attacks and has been blamed by the US for an assault on a maternity hospital earlier this year in which 24 new mothers and babies were killed.

Violence in the country has escalated in recent months despite meetings between the Taliban and government negotiators in Qatar who are seeking to resolve nearly two decades of conflict.

Tuesday’s attacks also took place against the background of a donors’ conference in Geneva, Switzerland, at which dozens of nations have been pledging billions of dollars in aid for the country. Germany has pledged €430 million ($510 million) in civilian assistance next year and through to 2024 provided Afghanistan shows it is committed to the peace process, among other conditions.

According to United Nations figures, nearly 6,000 Afghans were killed or injured in the first nine months of this year in fighting between government forces and the Taliban that has continued despite the Qatar talks.

Afghans say preventing next war as vital as ending this one