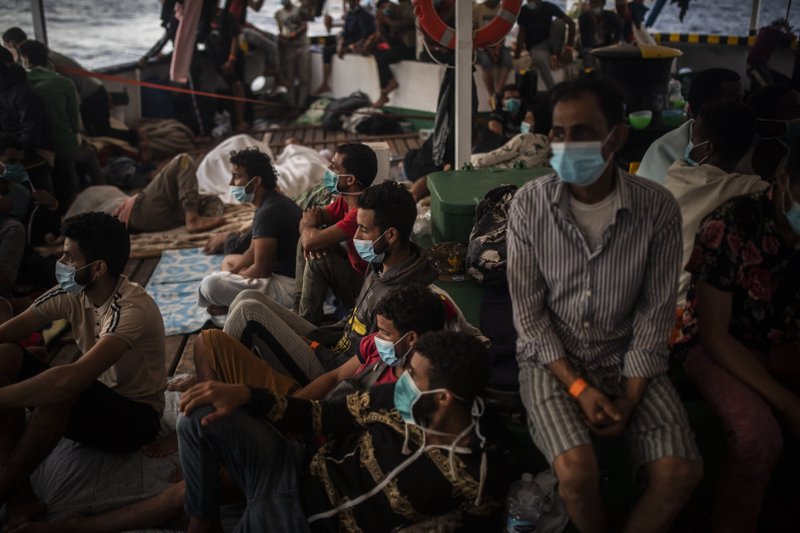 CAIRO (AP) — A Libyan armed group is holding hostage at least 60 migrants, including two dozen children, in “appalling” conditions after abducting them almost two weeks ago, an aid group said on Saturday.

Masked militiamen abducted the migrants on Sept. 28 from the town of al-Ajaylat, around 80 kilometers west of the capital, Tripoli, according to Medecins Sans Frontieres. The statement said that the armed group initially took hostage around 350 migrants, mainly from West Africa, but that most of the migrants managed to escape while some others were released.

The aid group said that it had notified the Libyan government’s agency for combatting illegal migration two days after the abduction, and later visited the warehouse where the migrants were held.

“We found over 350 women, children, and men sleeping on the ground in appalling living conditions without access to water, showers, or toilets,” said Guillaume Baret, MSF’s head of mission in Libya.

The militia stole valuable items and identification documents from the migrants, before taking them to a warehouse guarded by armed men in the nearby coastal city of Sabratha, the biggest launching point for the mainly African migrants who make the dangerous voyage across the Mediterranean Sea, the group said.

The Switzerland-based organization, also known as Doctors Without Borders, said that the remaining hostages are being held by the militia at a former military base.

Two Sabratha residents and one migrant said most of the armed men belong to a militia known as Al-Ammu, which the U.N. Panel of Experts on Libya identified in 2017 as main facilitators of human trafficking. The migrant said the militiamen are likely seeking ransom from families of the held migrants, or to sell them to other traffickers.

Al-Ammu and another militia, called the Brigade 48, are headed by two brothers from the area’s large al-Dabashi family. Both militias are affiliated with the U.N.-supported government in Tripoli.

The residents and migrant spoke on condition of anonymity for fear of reprisals. A spokesman for the Tripoli-based interior ministry did not answer phone calls and messages seeking comment.

The aid group said its medics were only allowed to consult with women and children among the captive migrants, and they were not allowed to treat men. A shooting reportedly broke out following an attempted escape on Oct. 2, and at least three people were killed, it said.

“The situation at the warehouse was tense, with armed men firing shots into the air,” the group’s statement added.

The migrants’ abduction shows the perils that refugees and migrants face in war-torn Libya, with those trapped in the country unable to “escape violence or find safety,” according to MSF.

Libya has emerged as a major transit point for African and Arab migrants fleeing violence and poverty to Europe, after the North African country collapsed into civil war following the overthrow and killing in 2011 of longtime dictator Moammar Gadhafi.

Image: FILE – In this Sept. 9, 2020 file photo, migrants of different nationalities rest on board the Spanish NGO Open Arms vessel, after being rescued as they were trying to flee Libya on board a precarious wooden boat, in the Central Mediterranean Sea. Amnesty International said Thursday, Sept. 24, 2020, that thousands of Europe-bound migrants who were intercepted and returned to Libyan shores this year were forcefully disappeared after they were taken of detention centers run by militias allied with the U.N.-supported government in the capital, Tripoli. The report also said that rival authorities in eastern Libya forcibly expelled serval thousands “without due process or the opportunity to challenge their deportation.” (AP Photo/Santi Palacios, File)

Key players to meet virtually to push for Libya cease-fire

Down but not out, Haftar still looms over Libya peace process