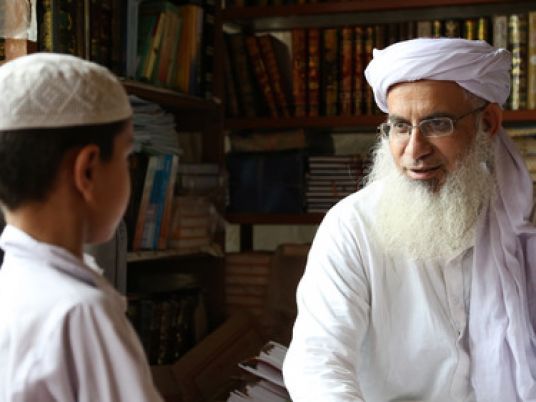 A chilling Pakistani documentary entitled "Among Believers"  stirred controversy at the Tribeca Film Festival. The movie unveils five years of stories hidden behind the walls of the Lal Masjid, which is known as the Red Mosque of Islamabad, where children are trained to be jihadis.
The Red Mosque is an organization in Pakistan that runs 30 madrassas (Islamic seminaries) and trains 10,000 students to devote their lives to jihad.
The documentary starts with a cleric asking a young child, "What do you want to be when you grow up?" He answers, "A mujahid,” or what is known as a jihadist fighter. The five-year-old boy was left alone when his father abandoned his mother, which drove him to Abdel Aziz Ghazi, known as “Mawlana Aziz”.
Ghazi is a Pakistani cleric and khateeb (prayer leader) in the Red Mosque who teaches students to dedicate their lives to jihad.
In the documentary, Ghazi asked the child, “Do you remember those sermons we taught you?” With a smile beaming across his face, the boy responds, “Look at the sacrifices of the martyrs of the Red Mosque, if you dare enter here, we will wage jihad, you cannot conquer us.”
“We train our students very differently from regular schools and colleges we teach our students to work hard, proselytize and wage jihad,” Ghazi says in the film.
The film also highlights the lives of two young teenagers Talha and Zarina, both 12, who attend madrassas run by the Red Mosque network. Their life paths diverge as the boy detaches from his moderate Muslim family and decides to become a jihadi, while the girl escapes the red mosque and joins a regular school. Over the next few years, Zarina's education is threatened by frequent Taliban attacks on schools like her own.
The movie was directed by Hemal Trivedi, who is based in both Mumbai and New York City.
Suspicions arouse around he Lal Masjid when they kidnapped several police officers then kidnapped Chinese workers from very famous massage centers. This particular event created international pressure on Pakistan, especially from the Chinese government.
On July 3, 2007 the government stormed the mosque in bloody gun battles, leading to the death of at least 100 killed and others injured.
Recently in the end of 2014,  the students of Jamia Hafsa, a women madrassa which is a part of to the Lal Masjid network, made and circulated a video in support of ISIS.

Tags Among the believers IS Jihad the red mosque