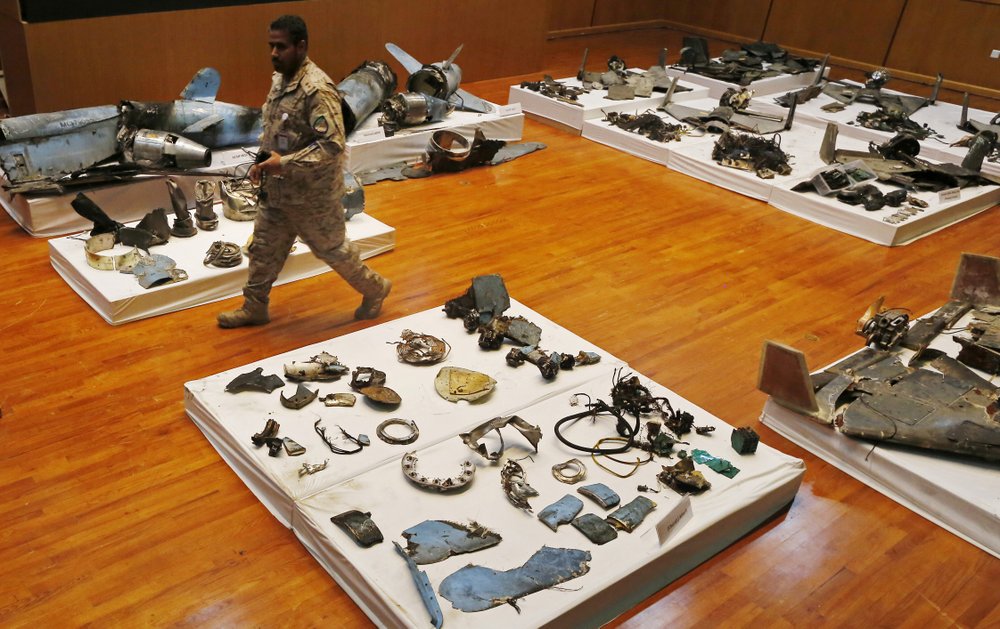 DUBAI, United Arab Emirates (AP) — A cruise missile and drone fragments that Saudi Arabia says it recovered from an attack on its oil industry bear similarities to Iranian-manufactured weapons, though more information is needed to make a definitive link, analysts told The Associated Press on Wednesday.

Particularly striking was the cruise missile, which they said resembled a Quds-1 missile previously displayed by Yemen’s Houthi rebels during a televised weapons exhibition in July.

However, the analysts uniformly agreed that missile, with its small, Czech-made TJ100 turbo engine, is limited to a range of 700 kilometers (435 miles). That means it could not have been fired from Yemen, which is over 1,000 kilometers (620 miles) from the oil-processing facility and oil field that were targeted in Saturday’s attack claimed by the Houthis.

Saudi Arabia alleged Wednesday that the attack was “unquestionably sponsored by Iran.” Iran denies being involved and has threatened the U.S. that it will retaliate “immediately” if Tehran is targeted in response.

The location where the cruise missile fell harmlessly to the ground, north of its intended target, also suggests it came from the north, said Sim Tack, an analyst at the Texas-based private intelligence firm Stratfor.

“I think the case is definitely becoming stronger for the argument that it wasn’t launched from Yemen,” he said.

Also, the Houthis are not known to have the capability to build cruise missiles locally.

“The idea that impoverished, war-torn Yemen would be able to develop a cruise missile without any outside assistance seems far-fetched,” wrote Fabian Hinz, a researcher at the James Martin Center for Nonproliferation Studies at the Middlebury Institute of International Studies in Monterey, California.

Iran’s previous efforts to supply missiles to the Houthis, and the fact that the country uses TJ100 engines in its drone program “do imply that Iran could be behind the Quds-1,” Hinz added.

Iran long has denied arming the Houthis, though U.N. experts, Western nations and the Saudi-led coalition have pointed to weapons recovered on the battlefield that appear to have come from the Islamic Republic.

Saudi military spokesman Col. Turki al-Malki told journalists in Riyadh that the cruise missile was a “Ya Ali” variant. However, that missile is fired from the air by a fighter jet and has collapsible wings, Tack said. The one on display in Riyadh appeared to have fixed wings like a ground-fired missile, suggesting that it could be a newly made ground-fired variant.

Al-Malki called the recovered drones, shaped like triangles, “delta wings.” They appeared to be so-called “killer drones,” which fly to a location and detonate in the air or upon striking a target.

But it’s difficult to directly attribute the drone to Iran given the vast variety of drones the country uses, Tack said. Iran also does not offer publicly searchable databases of its weapons and their sizes for comparison, he said.

“That makes it very difficult sometimes, especially when it comes to strange missiles appearing in different places like this,” Tack said.

While some of the cruise missiles and drones failed to reach their targets, analysts said they were struck by the precise damage.

“What’s remarkable to me is the accuracy with which these cruise missiles and drones seem to have hit their target,” Elleman said. They hit the most valuable targets and “expertly flew through the gaps in Saudi air defenses.”

Photo: A Saudi military officer walks by what was described asa the remains of Iranian cruise missiles and drones used in an attack this weekend that targeted the heart of Saudi Arabia’s oil industry, during a press conference by military spokesman Col. Turki al-Malki in Riyadh, Saudi Arabia, Wednesday, Sept. 18, 2019. Though Yemen’s Houthi rebels claimed the assault, the U.S. alleges Iran was behind it. (AP Photo/Amr Nabil)

Pompeo heads to Saudi Arabia after US blames Iran

Iran’s supreme leader: No talks with the US at any level