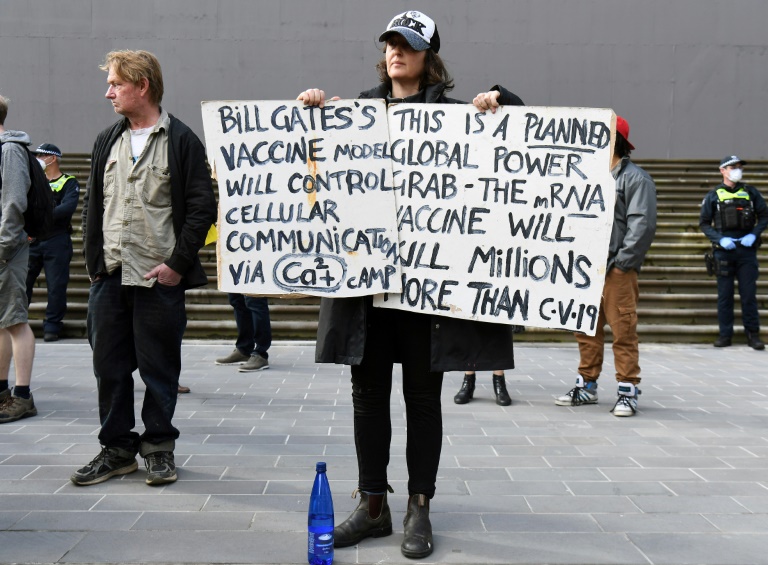 Ten people were arrested and a police officer injured Sunday at an anti-lockdown protest in Melbourne, where demonstrators claimed coronavirus was a government-engineered conspiracy designed to control the population.

About 150 protesters rallied outside Victoria’s state parliament to protest against a shutdown aimed at stemming the spread of COVID-19, while also peddling conspiracy theories about the virus.

Most Australian states and territories have begun easing restrictions, but Victoria has delayed relaxing its measures amid an outbreak at a Melbourne slaughterhouse that caused a spike in new cases.

In scenes reminiscent of anti-lockdown protests in the United States, demonstrators carried placards reading “fight for your freedom and rights”, and directed their ire at the founder of Microsoft, chanting “arrest Bill Gates”.

Fano Panayides, 37, said he was sceptical of the government declaring the coronavirus outbreak a pandemic, saying he believed it was a cover for authorities to gain greater control over the population.

“If this thing was half as deadly as they said it was, with half the population out there still working — even with the lockdown orders — this thing would’ve spread like wildfire through Australia. There’d be no stopping it,” he told AFP.

Health experts credit Australia’s success in curbing the spread of COVID-19 to an effective nationwide shutdown.

A spokeswoman for Victoria police said 10 people were arrested at Sunday’s rally, mostly for breaching social distancing and stay-at-home orders.

“Three of the offenders will also be charged with assaulting a police officer, and another offender will be charged with discharging a missile after allegedly throwing a bottle at police,” she said.

The spokeswoman added that police were working to track down other protest attendees, who could face Aus$1,600 fines for breaching coronavirus shutdown rules.

Australian chief medical officer Brendan Murphy said there was “a lot of very silly misinformation out there”, including that the virus was linked to 5G.

“I have unfortunately received a lot of communication from these conspiracy theorists myself. It is complete nonsense. 5G has got nothing at all to do with coronavirus,” he said.

Australia has recorded about 7,000 cases of COVID-19 and less than 100 deaths from the virus.