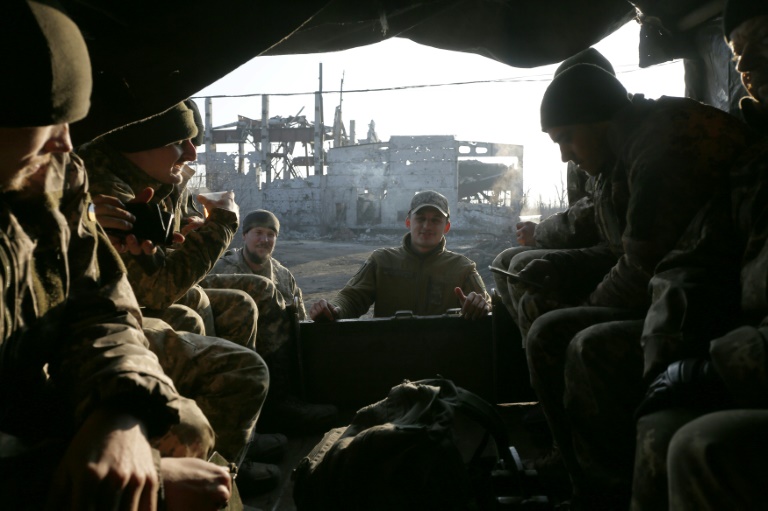 An armored police vehicle stands outside a polling station in Mariupol, the easternmost Ukrainian city still under Kiev’s control, as officers patrol the streets.

Just a few miles to the east is the frontline in a separatist conflict with Russia-backed rebels that has cost some 13,000 lives since it broke out in 2014 following Moscow’s annexation of Crimea.

President Petro Poroshenko came to power the same year after a popular uprising forced out his pro-Russian predecessor.

On Sunday Ukrainians decide whether to hand Poroshenko another five-year term or take a chance on his rivals — ex-prime minister Yulia Tymoshenko or untested comedian Volodymyr Zelensky.

“Ukrainian authorities do nothing but lie and steal,” said a 40-year-old metalworker in Mariupol who gave his name only as Oleg.

He told AFP he had voted for “the breath of fresh air” Zelensky — whose only political experience is playing the role of president in a television series.

Elsewhere in Mariupol, a large green tent had been erected where soldiers on active duty were being bussed in to vote.

The security services told AFP that armed special forces were patrolling many towns and cities across Ukraine.

Zelensky is favorite to win the first round of voting, after which he would meet either Tymoshenko or Poroshenko in a run-off next month.

‘Others had their chance’

In Lviv, a nationalist bastion in western Ukraine, some voters said they were tired of the country’s leadership.

“The others had their chance, but they didn’t do anything,” said 52-year-old Roman. “I went for Zelensky, perhaps he’ll manage it.”

Olga, a 40-year-old housewife, said she no longer trusted Poroshenko as he had not been able to fulfill promises made during his previous campaign.

At the polling station on the outskirts of Lviv, several voters crossed themselves in front of an Orthodox icon on the wall as they entered.

On the campaign trail, Poroshenko has made much of his success in overseeing the creation of an independent Ukrainian Orthodox Church, free from the 300-year-old influence of the Moscow Patriarchate.

“Army. Language. Faith,” read many of his campaign posters.

Inside the station, as elsewhere in Ukraine, several election monitors were wearing traditional embroidered linen shirts. The patriotic garb has become more popular since the pro-Western uprising of 2014.

In the capital Kiev, Olena Selizovska, a 75-year-old pensioner, told AFP she was voting so that her “children and grandchildren can live better, so there is no more war”.

She said she was backing Poroshenko.

“He came to power in a difficult situation, of course not everything has worked out for him.

“A woman might be able to end the war,” said Eduard, also a pensioner.

Attacks on activists as Ukraine struggles with graft reform