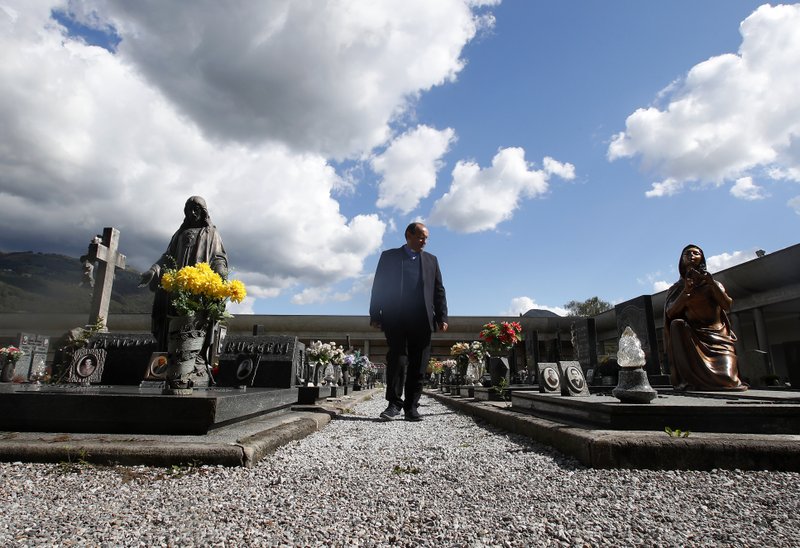 SERIATE, Italy (AP) — If there is anything the Rev. Mario Carminati and the traumatized residents of Italy’s Bergamo province remember about the worst days of the coronavirus outbreak, it’s the wail of ambulance sirens piercing the silence of lockdown.

Around the clock for weeks on end, ambulances screamed through Bergamo’s valleys and towns in a terrifying soundtrack of death, as mothers, fathers, sisters and brothers gasping for air were rushed to the hospital. Thousands never came back.

As the world counts more than one million COVID-19 victims, the quiet of everyday life and hum of industry has returned to Bergamo, which along with the surrounding Lombardy region was the one-time epicenter of the outbreak in Europe. But the memory of those dark winter days, and the monumental toll of dead they left behind, has remained with those who survived only to see the rest of the world fall victim, too.

“They would never stop,” Carminati, the parish priest of the Bergamo town of Seriate, recalled of the ambulances. “They would drive by continuously and you would wonder ‘When will this end?’”

Bergamo recorded its first positive case Feb. 23, two days after Italy’s first locally transmitted case was detected. By the end of March, the province of Bergamo had registered a 571 percent increase in deaths compared with the five-year monthly average — the biggest increase in Italy and one of the biggest localized increases in mortality rate in Europe.

Many of those deaths don’t even figure into Italy’s official COVID-19 toll of 35,851, the second highest in Europe after Britain, because so many of Bergamo’s victims died at home or in nursing homes without having ever been tested. Seriate, a town of 25,000 along Bergamo’s Serio river, was particularly hard-hit, losing 200 residents. Carminate says around half were parishioners whom he knew personally.

“This is the thing that made winter more tragic then. There were no leaves on the trees, and it was all gray,” he recalled this week during one of his regular visits to the cemetery to visit with his flock. “I certainly remember it as something gray and dark, something from which you felt like you couldn’t get out: a tunnel that never ended.”

Early on in the outbreak, the first in the West, Carminati opened the doors of one of his churches, St. Joseph’s, to house the coffins that had nowhere to go because local cemeteries and crematoria were full.

At first, some 80 wooden coffins lined the central aisle of St. Joseph’s church. Carminati and a fellow priest recited the rite of the dead, with a Psalm and Scripture reading, and gave each coffin a final benediction and blessing with holy water. After a convoy of army trucks took the coffins away to be cremated, another 80 arrived. Then another.

“That had a heart-breaking impact on me, something that left me with a great bitterness,” he said.

In all, Carminati says, some 260 coffins passed through his modern red-brick church in March and April, evidence of the horrific toll of the virus in Bergamo that continues today. Last month, Carminati buried his own nephew, 34-year-old Christian Persico, after he lost a five-month battle with COVID-19.

“We’ll have more because the epidemic hasn’t passed,” Carminati said ruefully during a break in his daily routine rebuilding a parish that lost its gardener, its singer at evening Mass and his friend Pio, who volunteered in the sacristy.

The idea to open his church to the coffins, when the parish was otherwise shuttered under lockdown, came naturally after hospital morgues, crematoria and cemeteries filled up. Carminati said he was asked by local authorities if his parish could house the coffins temporarily. “There was a need for space,” he said.

But Carminati also felt a need to provide the dead with a dignified farewell, since their families had been denied a funeral and final goodbye. In Italy, funerals were essentially banned during lockdown and many mourning families were themselves in quarantine or otherwise prevented from visiting isolated COVID wards.

On Palm Sunday, Carminati placed an olive frond on each coffin. Other days, he lit a candle.

Some parishioners reached out to Carminati after learning that he was taking the coffins in, wondering if he had seen their loved ones pass through. During the peak of the outbreak, some families reported chaotic, dayslong efforts to locate their dead mothers and fathers as hospitals struggling to keep people alive lost track of where the dead ended up.

Carminati would send photos of caskets when he could.

One day he fielded 10 calls from parishioners reporting deaths in the community. One call came from a nurse with word that his friend Pio had died. She dictated a final message Pio wanted Carminati to pass along to his wife.

“He had asked her to report to his wife that he had always loved her, and he still loved her very much,” Carminati said, tears welling up in his eyes. “This was his last farewell that he wanted to send his wife.”

As he watches infections and deaths surge elsewhere and the world passes the million mark, Carminati wonders why more countries didn’t pay attention to Italy’s tragedy as it was unfolding so they could be better prepared. Instead, he says, they brushed it off as typical Italian “exaggeration” and believed somehow they would be spared.

“Initially, they lost a lot of time, and then some took some absurd decisions like ‘herd immunity,’” he said. “For those of us who were in the middle of it, hearing these things at that time, we said: ‘These people are crazy. They have no idea what’s coming their way.’”

While the numbers of daily new infections and deaths in Italy today are nowhere near the peak, Carminati knows how quickly things can change. His hope looking forward is that the world learns lessons from the pandemic, both big and small.

“We need to understand we are not immortal, none of us is immortal,” he said after visiting the cemetery on a glorious, quiet autumn Sunday. “The virus ultimately returns to us this dimension of fragility.”

Image: Rev. Mario Carminati walks in a cemetery in Casnigo, near Bergamo, Italy, Sunday, Sept. 27, 2020. As the world counts more than one million COVID victims, the quiet of everyday life and hum of industry has returned to Bergamo, which along with the surrounding Lombardy region was the onetime epicenter of the outbreak in Europe. But the memory of those dark winter days, and the monumental toll of dead they left behind, has remained with those who survived only to see the rest of the world fall victim, too. (AP Photo/Antonio Calanni)