BRASILIA, Brazil (AP) — As Brazil hurtles toward an official COVID-19 death toll of 500,000 — second-highest in the world — science is on trial inside the country and the truth is up for grabs.

With the milestone likely to be reached this weekend, Brazil’s Senate is publicly investigating how the toll got so high, focusing on why President Jair Bolsonaro’s far-right government ignored opportunities to buy vaccines for months while it relentlessly pushed hydroxychloroquine, the malaria drug that rigorous studies have shown to be ineffective in treating COVID-19.

The skepticism has extended to the death toll itself, with Bolsonaro arguing the official tally from his own Health Ministry is greatly exaggerated and some epidemiologists saying the real figure is significantly higher — perhaps hundreds of thousands higher.

Dr. Abdel Latif, who oversees an intensive care unit an hour from Sao Paulo, said the fear and desperation caused by the coronavirus have been compounded by misinformation and opinions from self-styled specialists and a lack of proper guidance from the government.

“We need real humane public health policy, far from the political fight and based on science and evidence,” he said.

Brazil’s reported death toll is second only to that of the U.S., where the number of lives lost has topped 600,000. Brazil’s population of 213 million is two-thirds that of the U.S.

Over the past week, official data showed some 2,000 COVID-19 deaths per day in Brazil, representing one-fifth the global total and a jump public health experts warn may reflect the start of the country’s third wave.

Bolsonaro has waged a 15-month campaign to downplay the virus’s seriousness and keep the economy humming. He dismissed the scourge early on as “a little flu” and has scorned masks. He was not chastened by his own bout with COVID-19. And he kept touting hydroxychloroquine long after virtually all others, including President Donald Trump, ceased doing so. 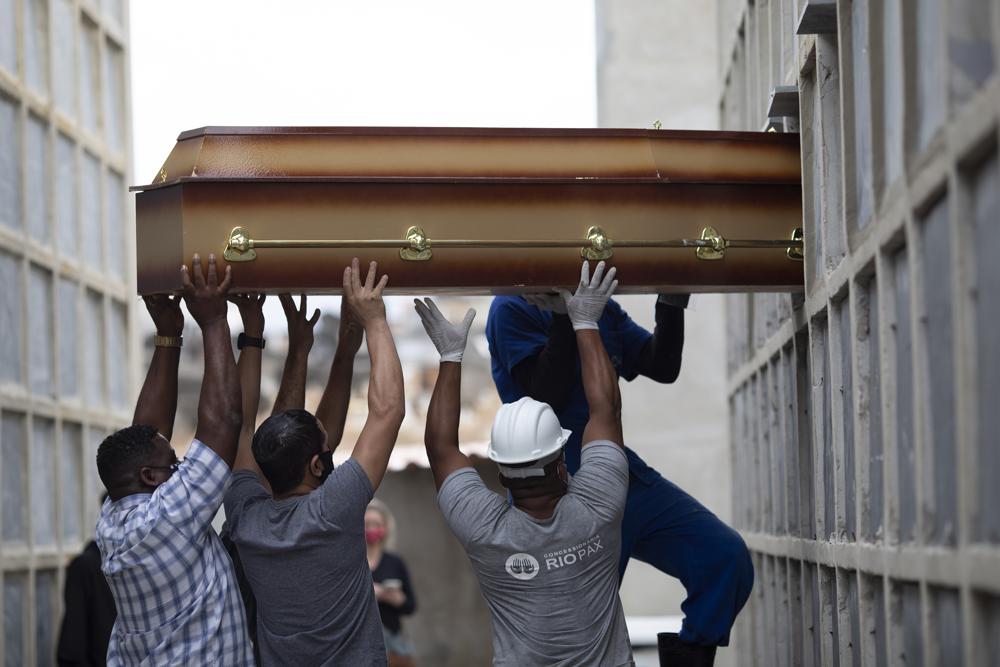 The remains of a woman who died from complications related to COVID-19 are placed into a niche by cemetery workers and relatives at the Inahuma cemetery in Rio de Janeiro. (AP Photo/Silvia Izquierdo)

As recently as last Saturday, Bolsonaro received cheers upon telling a crowd of supporters that he took it when infected.

He pushed hydroxychloroquine so consistently that the first of his four health ministers during the pandemic was fired and the second resigned because they refused to endorse broad prescription of the medicine, they told the Senate investigating committee.

The World Health Organization stopped testing the drug in June 2020, saying the data showed it didn’t reduce deaths among hospitalized patients. The same month, the U.S. Food and Drug Administration revoked emergency authorization for the drug amid mounting evidence it isn’t effective and could cause serious side effects.

Nevertheless, the notion that medicines like hydroxychloroquine work against COVID-19 is one of the main things the fact-checking agency Aos Fatos has been forced to debunk continually for the past year, according to Tai Nalon, its executive director.

“This didn’t change, mostly because there is a lack of accountability of doctors and other medical authorities who propagate this sort of misinformation, and the government supports it,” Nalon said. “Basically it takes only the president to make any fact-checking efforts not useless, but less effective.″

In fact, the Senate hearings that began in April have turned into a forum for dueling testimony from doctors who are either pro- or anti-hydroxychloroquine, creating what some experts fear is a misimpression that the drug’s usefulness is still an open question in the international scientific community.

A Health Ministry official who is a pediatrician told the Senate that there is a much anecdotal evidence of its effectiveness and that the ministry provided guidelines for its use without explicitly recommending it. Fact-checkers cried foul, saying the ministry’s own records show it distributed millions of the pills nationwide for COVID-19 treatment. 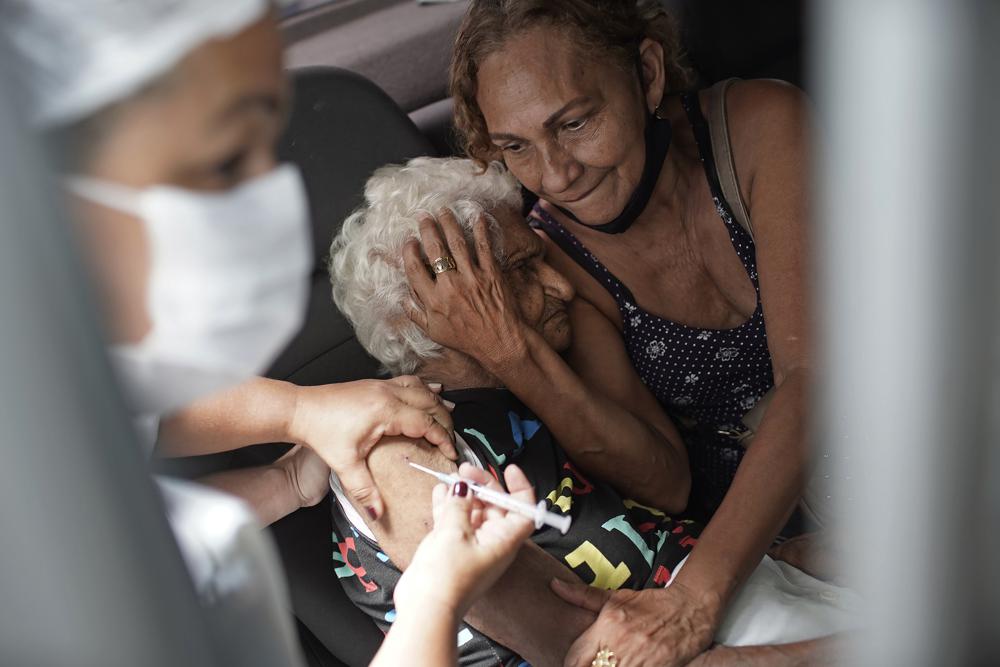 A cancer specialist and immunologist who has been one of the drug’s biggest champions — and is said to be an informal adviser to the president — also testified, decrying demonization of a drug she said has saved lives. But fact-checkers proved her wrong when she claimed Mexico is still prescribing it for COVID-19.

Still, the drug is celebrated across social media, including Facebook and WhatsApp. And other misinformation is circulating as well.

Bolsonaro told a throng of supporters on June 7 that the real number of COVID-19 deaths in 2020 was only about half the official death toll, citing a report from the national accounting tribunal — which promptly denied producing any such document.

The president backtracked but has publicly repeated his claim of mass fraud in the death toll at least twice since.

Epidemiologists at the University of Sao Paulo say the true number of dead is closer to 600,000, maybe 800,000. The senators investigating the government’s handling of the crisis ultimately hope to quantify how many deaths could have been avoided.

Pedro Hallal, an epidemiologist who runs the nation’s largest COVID-19 testing program, has calculated that at least 95,000 lives would have been spared had the government not spurned vaccine purchase offers from Pfizer and a Sao Paulo institute that is bottling a Chinese-developed shot.

When the U.S. recorded a half-million COVID-19 deaths, President Joe Biden held a sunset moment of silence and a candle-lighting ceremony at the White House and ordered flags lowered for five days. Bolsonaro’s government plans no such observance.

The Health Ministry is instead trumpeting the 84 million doses administered so far. The number is mostly first shots; just 11% of Brazil’s population is fully vaccinated. 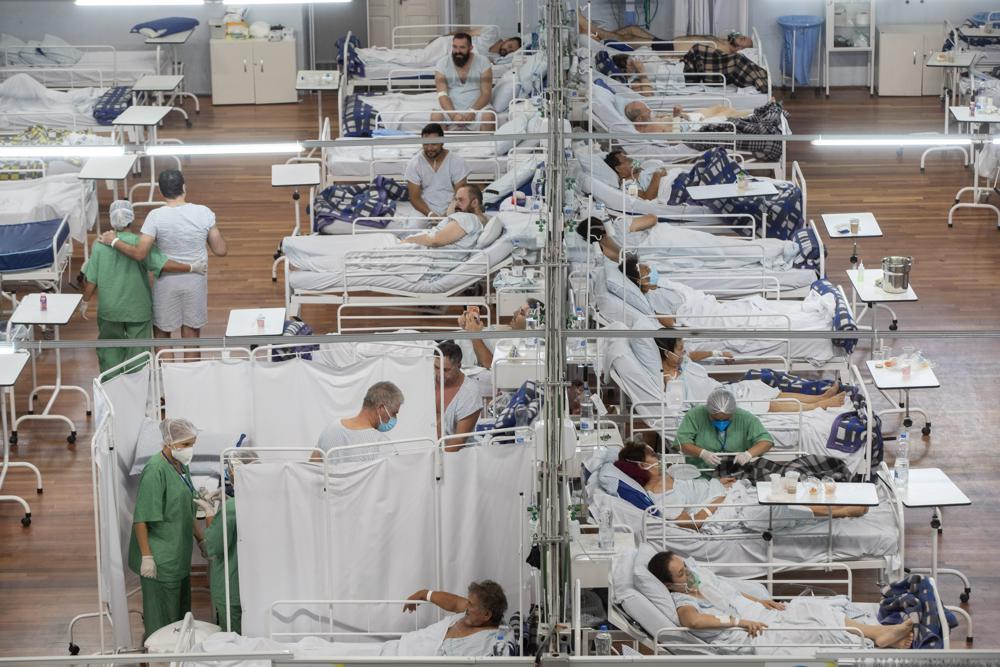 Patients infected with COVID-19 fill the beds at a field hospital built inside a sports coliseum in Santo Andre, Brazil, on the outskirts of Sao Paulo, Brazil. (AP Photo/Andre Penner)

The Senate committee will name at least 10 people as formal targets of its investigation by next week, members told The Associated Press on condition of anonymity. That could lead to a recommendation of charges by prosecutors. The list includes the pediatrician and cancer specialist who testified, the current health minister and his predecessor.

For his part, Bolsonaro has said the investigation amounts to persecution.

Last week, microbiologist Natalia Pasternak, who presides over the Question of Science Institute, a nonprofit that promotes the use of scientific evidence in public policies, went before the committee and decried the government’s “denialism.” She lamented that the myth of hydroxychloroquine won’t seem to die.

“In the sad case of Brazil, it’s a lie orchestrated by the federal government and the Health Ministry,” she said. “And that lie kills.”