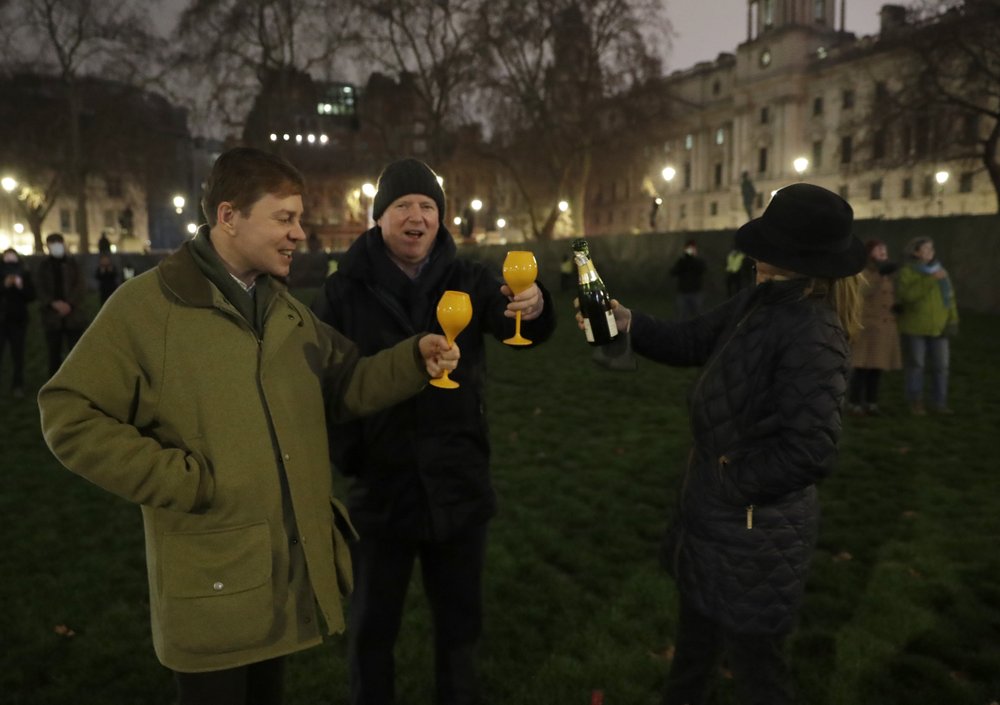 LONDON (AP) — Britain’s long and sometimes acrimonious divorce from the European Union ended Thursday with an economic split that leaves the EU smaller and the UK freer but more isolated in a turbulent world.

Britain left the European bloc’s vast single market for people, goods and services at 11 p.m. London time, midnight in Brussels, completing the biggest single economic change the country has experienced since World War II. A different UK-EU trade deal will bring new restrictions and red tape, but for British Brexit supporters, it means reclaiming national independence from the EU and its web of rules.

Prime Minister Boris Johnson, whose support for Brexit helped push the country out of the EU, called it “an amazing moment for this country.”

“We have our freedom in our hands, and it is up to us to make the most of it,” he said in a New Year’s video message.

The break comes 11 months after a political Brexit that left the two sides in the limbo of a “transition period” — like a separated couple still living together, wrangling and wondering whether they can remain friends. Now the UK has finally moved out.

It was a day some had longed for and others dreaded since Britain voted in a 2016 referendum to leave the EU, but it turned out to be something of an anticlimax. UK lockdown measures to curb the coronavirus curtailed mass gatherings to celebrate or mourn the moment, though a handful of Brexit supporters defied the restrictions to raise a toast outside Parliament as the Big Ben bell sounded 11 times on the hour.

A free trade agreement sealed on Christmas Eve after months of tense negotiations ensures that Britain and the 27-nation EU can continue to buy and sell goods without tariffs or quotas. That should help protect the 660 billion pounds ($894 billion) in annual trade between the two sides, and the hundreds of thousands of jobs that rely on it.
Full Coverage: Brexit

But companies face sheaves of new costs and paperwork, including customs declarations and border checks. Traders are struggling to digest the new rules imposed by the 1,200-page trade deal.

The English Channel port of Dover and the Eurotunnel passenger and freight route braced for delays as the new measures were introduced, though the pandemic and a holiday weekend meant cross-Channel traffic was light, with only a trickle of trucks arriving at French border posts in Calais as 2020 ended. The vital supply route was snarled for days after France closed its border to UK truckers for 48 hours last week in response to a fast-spreading variant of the virus identified in England.

The British government insisted that “the border systems and infrastructure we need are in place, and we are ready for the UK’s new start.”

But freight companies were holding their breath. Youngs Transportation in the UK suspended services to the EU until Jan. 11 “to let things settle.”

“We figure it gives the country a week or so to get used to all of these new systems in and out, and we can have a look and hopefully resolve any issues in advance of actually sending our trucks,” said the company’s director, Rob Hollyman.

The services sector, which makes up 80% of Britain’s economy, does not even know what the rules will be for business with the EU in 2021. Many of the details have yet to be hammered out. Months and years of further discussion and argument over everything from fair competition to fish quotas lie ahead as Britain and the EU settle into their new relationship as friends, neighbors and rivals.

Hundreds of millions of individuals in Britain and the bloc also face changes to their daily lives. Britons and EU citizens have lost the automatic right to live and work in the other’s territory. From now on, they will have to follow immigration rules and obtain work visas. Tourists face new headaches including from travel insurance and pet paperwork.

For some in Britain, including the prime minister, it’s a moment of pride and a chance for the UK to set new diplomatic and economic priorities. Johnson said the UK was now “free to do trade deals around the world, and free to turbocharge our ambition to be a science superpower.”

Conservative lawmaker Bill Cash, who has campaigned for Brexit for decades, said it was a “victory for democracy and sovereignty.”

“The United Kingdom remains our neighbor but also our friend and ally,” he said. “This choice of leaving Europe, this Brexit, was the child of European malaise and lots of lies and false promises.”

The divorce could also have major constitutional repercussions for the United Kingdom. Northern Ireland, which shares a border with EU member Ireland, remains more closely tied to the bloc’s economy under the divorce terms, a status that could pull it away from the rest of the UK

In Scotland, which voted strongly in 2016 to remain, Brexit has bolstered support for separation from the UK The country’s pro-independence First Minister Nicola Sturgeon tweeted: “Scotland will be back soon, Europe. Keep the light on.”

Many in Britain felt apprehension about a leap into the unknown that is taking place during a pandemic that has upended life around the world.

“I feel very sad that we’re leaving,” said Jen Pearcy-Edwards, a filmmaker in London. “I think that COVID has overshadowed everything that is going on. But I think the other thing that has happened is that people feel a bigger sense of community, and I think that makes it even sadder that we’re breaking up our community a bit, by leaving our neighbors in Europe.

“I’m hopeful that we find other ways to rebuild ties,” she said.

Image: People raise a glass and celebrate in Parliament Square as the bell known as Big Ben strikes 2300, and Britain ends its transition period and formally leaves the European Union in London, Thursday, Dec. 31, 2020. Due to the coronavirus pandemic and the restrictions on gatherings people were moved on by police if they met in any number .(AP Photo/Matt Dunham)

Brexit’s choice for EU, UK: firm friends or nearby rivals