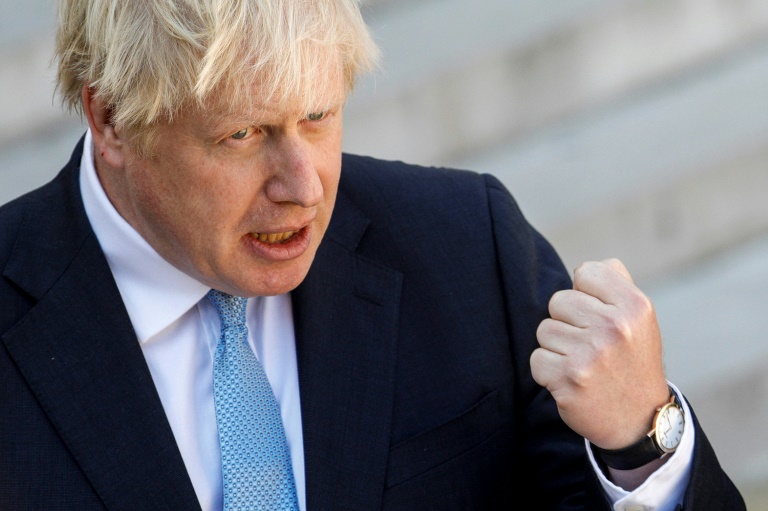 Brexit talks between Britain and the European Union appeared to be on the verge of collapse on Tuesday, with Brussels accusing London of intransigence and threatening the bloc’s future.

Prime Minister Boris Johnson spoke to German Chancellor Angela Merkel, who said a deal was “overwhelmingly unlikely” without compromise by the UK, according to a Downing Street source.

She warned that any deal was “essentially impossible” if London failed to give ground on the thorny Irish border question and keep British-run Northern Ireland in the EU customs union, the source added.

Britain is due to leave the EU on October 31, more than three years after the country narrowly voted in a referendum to end its almost five-decade membership of the bloc.

Johnson, who once said he would rather be “dead in a ditch” than seek a Brexit extension — submitted new plans last week in place of an agreement his predecessor Theresa May struck with Brussels in late 2018.

The UK parliament, which is deeply divided over Brexit, rejected that plan three times.

According to the BBC, Downing Street believes talks between the two sides are now “close to breaking down”.

In Berlin, Merkel’s office confirmed the chancellor spoke by telephone to Johnson but said it would not comment “on such confidential discussions”.

Johnson’s official spokesman told reporters the pair had a “frank exchange” and that discussions were at a “critical point”.

But he rejected an accusation from EU Council president Donald Tusk’ that Johnson was playing “some stupid blame game”.

Tusk tweeted: “At stake is the future of Europe and the UK as well as the security and interest of our people.

Much of the focus in both London and Brussels is shifting to what happens next, as a crunch EU summit approaches next week — and who would be to blame for a potentially chaotic no-deal Brexit.

On the markets, the pound lost around 0.5 percent of its value against the dollar within moments of Downing Street’s comments.

Johnson’s proposals outline a new way to avoid a hard border between EU member the Republic of Ireland and Northern Ireland after Brexit.

It would take Northern Ireland out of the EU’s customs union but keep it largely aligned with the bloc’s “single market” standards and regulations.

EU officials said this would not remove the need for customs checks — a deal-breaker because it jeopardises the 1998 Good Friday Agreement that ended three decades of sectarian violence in Northern Ireland.

The agreement effectively created an invisible border between north and south, satisfying republicans who want a united Ireland and unionists who want to keep the status quo.

Keeping the border open and free-flowing has become a key sticking point in the Brexit talks.

Downing Street officials say Brussels is making a big mistake because failure in the coming days to reach a deal would result in Britain’s position only hardening down the line.

One source in Johnson’s office told The Spectator magazine the government will try to “do all sorts of things” to prevent another Brexit delay should negotiations really collapse.

Johnson has said Britain will leave the EU on October 31 “deal or no deal — but no delay”, despite legislation that requires him to request another postponement if no agreement is struck.

Scotland’s top civil court was expected to rule Tuesday whether it could force someone else — possibly a judge — to sign the extension request if Johnson does not.

But should a delay still be granted at the EU summit, Johnson will campaign for a “no-deal” in a snap general election, the Downing Street source told The Spectator, which supports the ruling Conservative party.

“If this deal dies in the next few days, then it won’t be revived,” the source added in what was said to be a series of lengthy text messages.

The same source also warned that EU countries which were against further delays to Brexit would “go to the front of the queue for future cooperation”.

Those who support further delays would “go to the bottom of the queue”, including on security issues, the sourced added.

Britain unveils new Brexit plan with warning of no deal