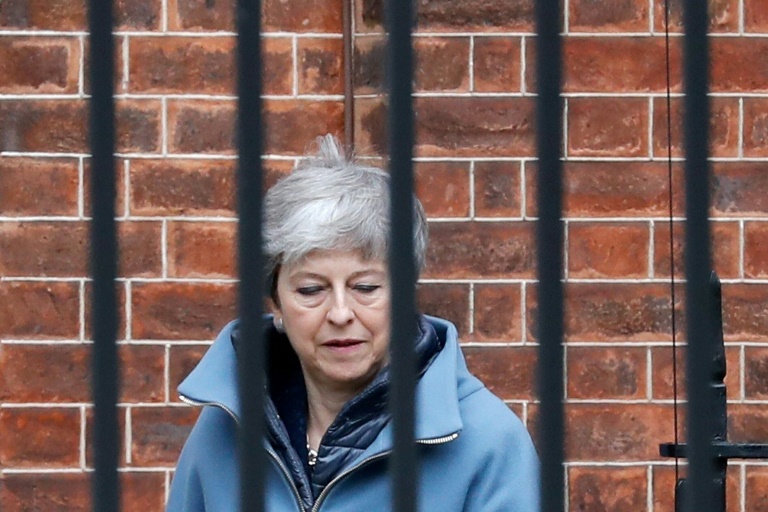 British Prime Minister Theresa May will on Monday chair a potentially volatile meeting of her cabinet amid reports of an attempted coup by colleagues over her handling of Brexit.

May will meet the very ministers said to be plotting to oust her at the start of another crucial week in Britain’s withdrawal from the European Union, which could see MPs seize control of the process from the government.

Lawmakers are set to vote later Monday on whether to force through the House of Commons a series of so-called “indicative votes” to gauge support for various Brexit options.

Meanwhile May must decide when, or even if, to ask them to vote again on her divorce deal — finalised with the EU last year — which they have already overwhelmingly rejected twice.

Under a new timetable imposed by European leaders last week, she now has until April 12 to win MPs’ backing for the agreement or find a viable alternative which could include a lengthy extension to Brexit.

However, after a disastrous last week, the increasingly isolated leader spent the weekend ensconced at her country residence Chequers “at the mercy of a full-blown cabinet coup”, according to the Sunday Times.

The newspaper said it had spoken to 11 senior ministers who “confirmed that they wanted the prime minister to make way for someone else” and planned to confront her at Monday’s cabinet.

Such gatherings usually take place on Tuesdays but Downing Street confirmed one was scheduled for 10:00 am (1000 GMT) Monday.

Ministers identified as potential interim replacements played down the reports.

“It’s not the time to change the captain of the ship,” said Environment Minister and leading Brexiteer Michael Gove.

But Brexit-backing tabloid The Sun, Britain’s best-selling daily, called for May to announce Monday that she will resign as soon as her deal is approved and Britain leaves the EU.

Under the headline “Time’s up, Theresa”, the paper said that was the “only one, slim chance” her deal would have of getting parliamentary backing.

Parliament has been deadlocked for months over Brexit, with MPs unable to decide how to implement the 2016 referendum vote to leave, reflecting bitter divisions nationwide.

On Saturday, organizers estimated one million pro-Europeans marched through central London demanding another public vote on leaving the bloc.

If May’s deal finally wins parliamentary approval Britain will leave the EU on May 22.

It was expected to face another vote this week but the prime minister has told lawmakers signs of “sufficient support” are needed first.

With her parliamentary allies the Democratic Unionist Party indicating Friday that they remain opposed to her plan, that appears lacking.

On Sunday Tory Brexiteers outside government, including influential MP Jacob Rees-Mogg and former foreign minister Boris Johnson — widely seen as wanting to replace May — travelled to Chequers for talks.

“It’s looking very difficult to bring together a majority for it,” finance minister Philip Hammond earlier conceded to Sky News.

However, “one way or another parliament is going to have the opportunity this week to decide what it is in favour of,” he added.

MPs will resume debate on Brexit on Monday with the chance to vote on an amendment tabled by a cross-party group of senior lawmakers scheduling “indicative votes” on Wednesday.

If passed, lawmakers will be able to vote on various options, from stopping Brexit altogether or holding a second referendum to remaining in a customs union with the EU or its single market.

MPs may then try to turn their non-binding votes into enforceable law.

Brexit Secretary Steve Barclay, an ardent eurosceptic, warned Sunday it could prompt a general election because most alternatives go against Conservative manifesto promises in the 2017 election.

“There is a constitutional collision if parliament is instructing a government to do something that is fundamentally against what it has been elected to do,” he told the BBC.

But in a sign of the splits within the cabinet, Hammond appeared more open-minded if May’s deal remains blocked.

In a departure from government policy, he described holding a second referendum as “a coherent proposition and it deserves to be considered along with the other proposals”.

Britain's May reportedly on the brink amid Brexit crisis

Brexit delay agreed after tumultuous talks with Theresa May