Authorities in the United Arab Emirates have arrested ten members of a local Muslim Brotherhood cell, according to local news reports.

Local Emirati newspaper Al-Khaleej quoted a security source as saying that investigations revealed the group runs a cell in the UAE.  However, Brotherhood spokesperson Mahmoud Ghozlan denounced the reports, saying that they "aim to provoke confusion about the Muslim Brotherhood" in remarks to the state-run Al-Ahram news portal Tuesday.

Ghozlan added that the group doesn't interfere in other countries' affairs and strives to maintain good relations between Egypt and the UAE, and said that the Brotherhood would respond to the claims with evidence to the contrary.

He also declined to comment on any links between the arrests and recent comments by Dubai police chief Dahi Khalfan slamming the Brotherhood, but claimed that Khalfan might have ordered the arrests out of enmity towards the group.

Khalfan has repeatedly attacked the Brotherhood in media comments, and earlier this month a Brotherhood member accused Khalfan and the UAE's ambassador to Egypt of plotting to assassinate the group's leaders.

Al-Khaleej reported that group members had been meeting secretly throughout the Gulf country and also claimed that the cell had created companies acting as fronts to transfer funds to the main chapter in Egypt.

The newspaper further claimed that investigations showed the cell was collecting classified defense-related information about the UAE, and had held workshops for members about overthrowing ruling Arab regimes. The newspaper's source also said that more suspects could be arrested soon.

Other news reports Sunday said several Egyptians in the UAE had been arrested, but without any specific accusations.

The UAE has been wary of revolts in neighboring Arab states that have overthrown several autocratic leaders, and the subsequent rise of Islamist governments in those countries. 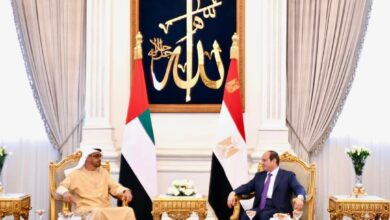 Sisi receives the President of the UAE in New Alamein