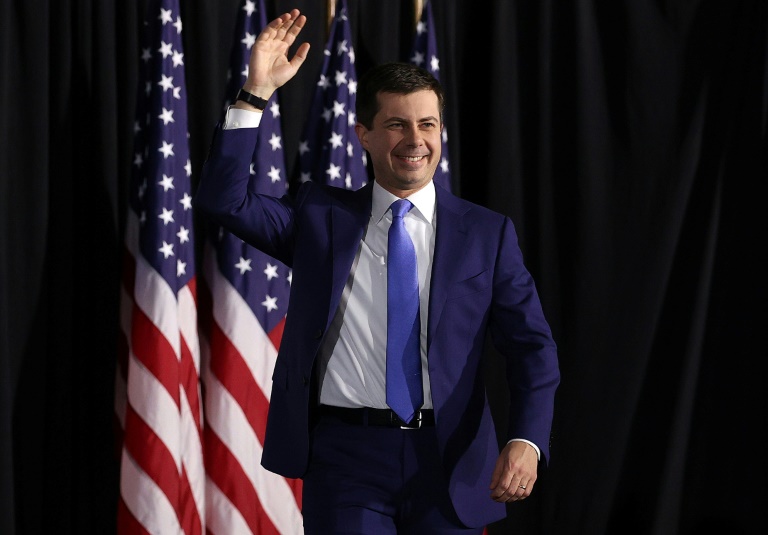 Progressive standard-bearer Elizabeth Warren was in third place followed by Joe Biden, a disappointing showing for the former vice president who has claimed he is best positioned to defeat Donald Trump in November.

Buttigieg, the 38-year-old former mayor of South Bend, Indiana, who has been battling Biden for the moderate wing of the party, hailed what he called an “astonishing victory” in the midwestern farm state which kicks off the presidential nominating process.

“I have never been more confident in our campaign, in our team, and in the vision that brought to us this point,” Buttigieg told ecstatic supporters in New Hampshire, which holds the next nominating contest on February 11.

With polls still mixed on whether Americans would be comfortable with an openly gay president, Buttigieg also made a rare, though implicit, reference to his sexuality — and the added significance it gave the Iowa outcome.

“It validates for a kid, somewhere in a community, wondering if he belongs, or she belongs, or they belong in their own family, that if you believe in yourself and your country there’s a lot backing up that belief,” he said with a catch in his voice.

According to the partial results, Buttigieg, unknown nationally a year ago, leads with 26.8 percent followed by Sanders, the 78-year-old self-described democratic socialist, with 25.2 percent, followed by Senator Warren with 18.4 percent, and Biden with 15.4 percent.

The centrist senator from Minnesota Amy Klobuchar was in fifth place on 12.6 percent, with 71 percent of the precincts reporting.

The results were posted some 21 hours after Iowans gathered across the state to hold the first vote of the presidential nominating season.

Troy Price, the chairman of the Iowa Democratic Party, apologized profusely for the delay and blamed it on a “coding error” with an app being used for the first time to report the returns from precincts across the farm state.

Price pledged to provide the full results as soon as possible.

“We have been working day and night to make sure that the results are accurate,” he said. “And we also have a paper trail and documentation that we have been able to use to provide information to help verify the results.”

As Iowa struggled to publish the results and frustrated Democratic candidates fumed, Trump gleefully pounced on the hold-up, describing the Democrats’ failure to deliver timely results as an “unmitigated disaster.”

“Nothing works, just like they ran the country,” tweeted Trump — hours before delivering his annual State of the Union speech to a joint session of Congress under the cloud of impeachment.

The results are usually known within hours of the conclusion of the caucuses, which do not involve a traditional ballot but see voters attending public gatherings and voicing support for the candidate of their choice.

Iowa kicks off the process of selecting presidential nominees every four years, but the fiasco surrounding the results is likely to increase calls for the state to lose the honor.

“The top finishers, probably Sanders and Buttigieg, could have used their showings to launch into New Hampshire,” the next contest, said Larry Sabato, a professor of politics at the University of Virginia.

“Instead, the story is the shocking incompetence of the Iowa Democratic Party.”

He called for an end to the “strange system in a 91 percent white state” in favor of giving other states a chance to kick off the process.

“This chaos has created an environment where misinformation is now running rampant online, further undermining confidence in the democratic process,” he said.

With Iowa still mired in confusion, the Democratic candidates turned their sights on New Hampshire.

According to a Boston Globe/WBZ-TV/Suffolk University poll released Monday, Sanders is leading in the Granite State with 24 percent, followed by Biden on 18 percent, Warren with 13 percent and Buttigieg with 11 percent.

Alluding to his own victory in Republican caucuses in Iowa, Trump said that “the only person that can claim a very big victory in Iowa last night is ‘Trump.'”

“When will the Democrats start blaming RUSSIA, RUSSIA, RUSSIA, instead of their own incompetence for the voting disaster that just happened in the Great State of Iowa?” Trump tweeted.

US Democrats make final pitches ahead of Iowa showdown