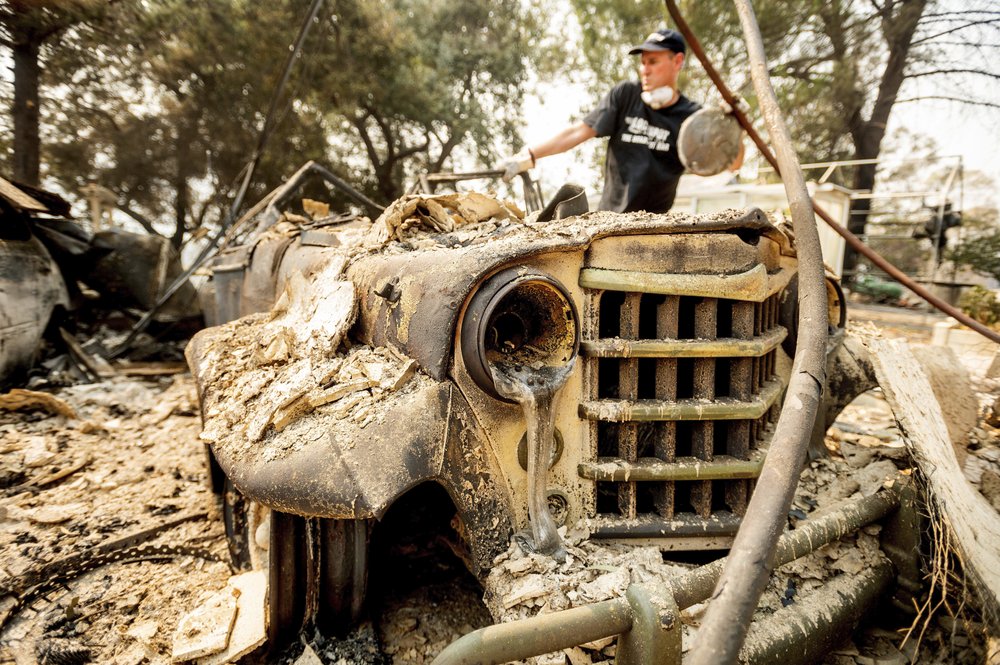 VACAVILLE, Calif. (AP) — When he closes his eyes at night, Hank Hanson hears sirens in his dreams — a byproduct of living nearly 30 years in the wildfire-prone wilderness of Northern California between San Francisco and Sacramento.

But about one am Wednesday, Hanson knew he wasn’t dreaming when he looked to the hills above his home.

The ridge line, where he and his wife in daylight tracked the sun’s shifting seasonal paths, was lit up as if someone had strung lights across it and plugged it in.

“It started pouring toward us like a waterfall,” Hanson, 81, said.

The fire was one of the more than 500 wildfires ignited across California this week from what state firefighting officials are calling a “lightning siege” — summer thunderstorms that produce little or no rain but have prompted nearly 12,000 lightening strikes across sun-scorched terrain.

More than 13,700 firefighters are battling the blazes, the most severe of which are focused in Northern California west of the state capital in Sacramento and east of the San Francisco Bay.

The extraordinary reach of the flames has pushed firefighting resources to the point “we have not seen in recent history,” said Shana Jones, chief of the Sonoma-Lake-Napa unit of the state Department of Forestry and Fire Protection.

With firefighting crews stretched thin, there was no evacuation warning for Hanson and his neighbors.

Luckily, Hanson was awake because his electricity was out and the stifling 95-degree (35C) temperature prevented him from sleeping.

He quickly woke up his wife, and the two raced in their diesel truck down the road. The air rang with car horns as people desperately tried to wake up their neighbors.

Hanson and his wife made it to a hotel room in the nearby community of Fairfield, grateful they were alive. They found out later that their house was destroyed by the fire.

The house was really two houses. The first was a small redwood home originally built in Vacaville in the 1930s but later moved to the property. Hanson, who owned a business that made patio enclosures, bought the property in 1974. He spent weekends there for the next 17 years, planting walnut, peach, fig and eucalyptus trees.

In 1991, he completed a 3,000 square-foot (279-square-meter) addition to that house. It had a wine cellar, indoor and outdoor pools plus three fireplaces.

The fires this week have grown quickly and, collectively, have destroyed nearly 700 homes and other structures across the state.

Most of the homes that were leveled were burned by the fire that took Hanson’s home, the so-called LNU Lightning Complex fire. It’s the second-largest wildfire in state history and has burned more than 490 square miles (1,270 square kilometers).

Hanson said he is treating the fire as “an adventure” and talks excitedly when describing his harrowing escape . But his voice catches when he talks about the house, especially when he says he won’t rebuild.

Hanson said he plans to turn the lot into a park and a campground for himself and his friends for the next few years.

But first, he had some shopping to do. His tomatoes, surprisingly, did not burn. He bought some hoses and plans to return to the ranch in an attempt to water them, assuming the deer haven’t eaten them first.

“They escaped the whole deal,” he said. “About the only thing I have left in the world is tomatoes.”

By ADAM BEAM and NOAH BERGER

Image: Mark Hanson goes through the remains of a 1951 Willys-Overland Jeepster following the LNU Lightning Complex fires in Vacaville, Calif., on Friday, Aug. 21, 2020. The blaze destroyed his family home as well as the Jeepster which his father purchased new and Mark rebuilt while in high school. (AP Photo/Noah Berger)