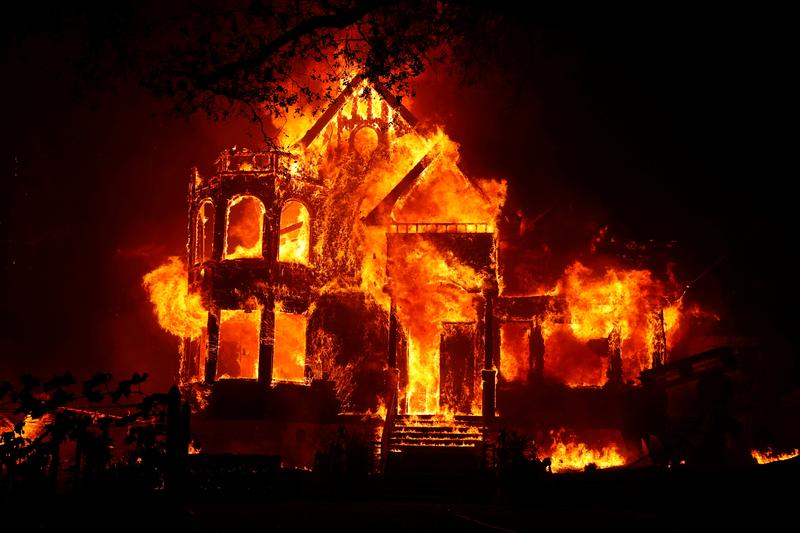 ST. HELENA, Calif. (Reuters) – A wind-driven wildfire erupted on Sunday in the heart of northern California’s Napa Valley wine country to spread across nearly 2,000 acres (809 hectares), forcing the evacuation of a hospital and hundreds of homes, authorities said.

Fire crews were out in force, scrambling to fend off flames threatening neighborhoods and vineyards at the northern end of the famed wine-growing valley and surrounding hillsides, about 75 miles (120 km) north of San Francisco.

The blaze, dubbed the Glass Fire, broke out before dawn near Calistoga and raced toward the adjacent communities of Deer Park and St. Helena, with flames reaching within a mile of the Adventist Health St. Helena hospital.

All 55 patients there at the time were safely evacuated by ambulance and helicopter over the course of five hours from about seven am, hospital spokeswoman Linda Williams told Reuters.

“We had ambulances lined up from all over the Bay area,” she said, adding that although smoke shrouded the facility, the skies above were clear enough for helicopters’ airlift efforts.

It was the second wildfire-related evacuation of the 151-bed hospital in a month, after a massive cluster of lightning-sparked blazes that swept several counties north of the San Francisco Bay region in August.

Authorities ordered about 600 homes evacuated on Sunday, with residents of 1,400 more warned to be ready to flee at a moment’s notice, said Tyree Zander, a spokesman for the state’s forestry and fire protection department (CalFire). The notices affected at least 5,000 people, he added.

By evening, flames stoked by winds gusting up to 50 mph (80 kph) had scorched about 1,800 acres (728 hectares) of grassy rolling hillsides and oak woodlands, with little or no containment, Zander said.

The cause of the fire is being investigated. There were no immediate reports of injuries, but a Reuters photographer in St. Helena saw some structures that had been burned.

The blaze erupted midway through the traditional grape-harvesting period in the Napa Valley, world renowned as one of California’s premiere wine-producing regions. The area’s 475 wineries account for just 4% of the state’s total annual grape harvest but half of the retail value of all California wines sold, according to the Napa Valley Vintners trade group.

Of Napa’s 16 wine-growing districts, or sub-appellations, the Howell Mountain area may have faced the greatest threat, said Lisa Covey, a spokeswoman for Hall Family Wines, which kept open during the day all its three tasting rooms in the county.

Napa and other wine-growing regions have been hit by wildfires in and around the Bay area for several years. Susan Krausz, co-owner of Arkenstone Estate Vineyards in the Howell Mountain community of Angwin, said it would take days or weeks to assess the impact of the latest blaze on valley vintners.

“Most people have harvested,” she said, but added, “Any time’s a bad time for a fire.”

Tom Kaljian, 78, a realtor who owns a house about halfway between Calistoga and St. Helena, defied evacuation orders to spend the day with his wife hosing down their home and dry brush along a fence line separating their property from the Silverado Trail, a key north-south roadway.

“We were told to get out of here, but I was trying to protect our little abode, so we stayed,” he told Reuters by telephone.

After firefighters told him the house was no longer in danger, he added, “I stopped watering at that point, and came in and took a nap.”

The Glass Fire came as the Pacific Gas and Electric Company said it was temporarily halting power to transmission lines in parts of 16 counties across northern and central California to guard against greater wildfire risks in hot, windy, dry weather.

CalFire said a fire weather watch would start on Monday across much of Southern California, following the forecast return of hot, gusty Santa Ana winds and low humidity.

California wildfires have scorched more than 3.7 million acres in the first nine months of 2020, far exceeding any single year in state history, killing 26 people and destroying more than 7,000 structures.

Image: A home is seen fully engulfed in flames during the Glass Fire in St. Helena, California, US September 27, 2020. REUTERS/Stephen Lam